Have bridges always fascinated you? Read on to know about the world’s most famous bridges!

A deep ravine amidst green, a tiny rickety bridge made of wood right across it. Two lone figures walking on it and the setting sun at the backdrop! Bridges are those amazing architectural wonders that have made the most inaccessible places in the world accessible. Having been there from the times of the early man, bridges have been used extensively to explore the depths of a forest or cross a treacherous river unharmed. Historical references aside, even lord Rama built a bridge across the Arabian Sea to reach Ravan’s Lanka! Bridges are indispensable and every nook and cranny of the modern world is filled with them. They have become landmarks of engineering and some of them are located in the most exotic places in the world. Bridges today make for great travel destinations and a city is usually recognized and remembered with its beautiful bridge. Over the years, bridges, by far, have gained the reputation of being one of the most romantic places. Read on to know about the most famous bridges in the world where you can take your loved one and entice him/her with the magic of architecture! 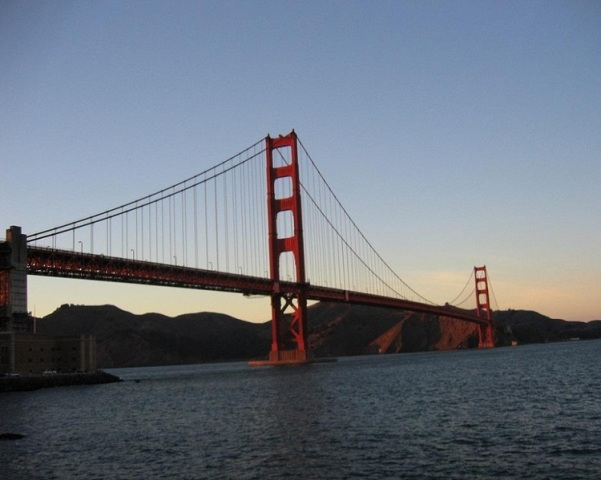 Image: eric [email protected]
World’s Most Famous Bridges
Ponte Vecchio
‘Ponte Vecchio’ literally translated as ‘the old bridge’ is one of the bridges in Florence, Italy to survive the World War 2. Built during the medieval period, the bridge spans built across the Arno River. The specialty of the bridge is that it, it has shops built in it. In the yesteryears, the bridge served as a region where trade flourished extensively. Back in the old days, it mainly comprised of butcher shops. Now, on the contrary, jewelry shops thrive in these old, timeless dwellings. It is also believed that the concept of bankruptcy was for the first time introduced in this place. A popular practice which involved breaking the table on which a merchant sold his wares was performed, when a merchant went bankrupt!
Golden Gate Bridge
This, by far, is one of the most popular bridges in the world. It is called the Golden Gate Bridge, because it spans the Golden Gate Strait between San Francisco and Marin Country to the north. It is one of the longest suspension bridges in the world and has a characteristic orange color to increase visibility during heavy fog. The masterwork of architect Joseph B. Strauss, whose statue graces the southern observation deck, the bridge took seven years to build and was completed in 1937. This bridge is an internationally recognized symbol of San Francisco and California, and one of the hottest tourist destinations.
Millau Bridge
The Millau Bridge is the tallest vehicular bride in the world; it being slightly higher than the Eiffel Tower. It is an enormous cable-stayed road-bridge that spans the valley of the river Tarn, near Millau in southern France. The bridge attracts a large number of tourists. An awe-inspiring sight to behold, the Millau Bridge extends about 8,071-ft in length, with the longest single span of 1,122-ft and a maximum clearance below of 886-ft. The bridge has quite a lot of records to its credit, as it is has the highest pylons and the highest bridge tower in the world and the highest road bridge deck in Europe. A ride through this amazingly enticing bridge is surely a dream come true for many!
Tower Bridge
The Tower Bridge is one of the most iconic symbols of United Kingdom. It is a combined bascule and suspension bridge in London and is across the river Thames. Construction of the bridge started in the year 1886 and took eight years to complete. Its close proximity to the Tower of London is from where the bridge gets its name, i.e. the Tower Bridge.This bridge has a length of 800-ft, but raises in the centre to a maximum clearance of 140-ft, allowing ships to pass down the Thames.
Charles Bridge
An old stone gothic bridge that crosses the Vltava River in Prague, Czech Republic, Charles Bridge is one of the famous historical bridges of the yesteryears. The construction of this bridge started in 1357, under King Charles-IV and finished in the beginning of fifteenth century. This bridge made Prague an important trade route between Eastern and Western Europe, as it was the only means of crossing the Vltava River. Originally named Stoned Bridge or Prague Bridge, Charles Bridge got its present name in the year 1870. The bridge today is thronged by tourists and is one of the most visited places in Prague.
How to Cite