Are you wondering what the 7 new wonders of the world are? If yes, then this article would be of help. Explore the article to get the list of the New Seven Wonders of the World.

Man made or natural, certain monuments standing tall in different parts of the globe dictate to the world the glory and heritage of the past and present era. The list of the Seven Wonders of the World has recently been updated through voting by the general public internationally, by SMS and online votes in 2007. Over 100 million people voted to declare the New 7 Wonders of the World, aiming to represent global harmony and heritage. The history of making lists of Seven Wonders of the World can be dated back to the times of Herodotus and Callimachus, both renowned Greeks. Among the list of all the ancient wonders, only the Great Pyramid of Giza remains intact even today, as the others have all been destroyed, either due to natural calamities or other reasons. The new list consists of man-made monuments from all across the world, compiled by a Swiss-based company, The New Open World Corporation. The list has included the Great Pyramid of Giza as the honorary candidate, amongst the seven new wonders of the world. Read on to find details about the New Seven Wonders of the World. 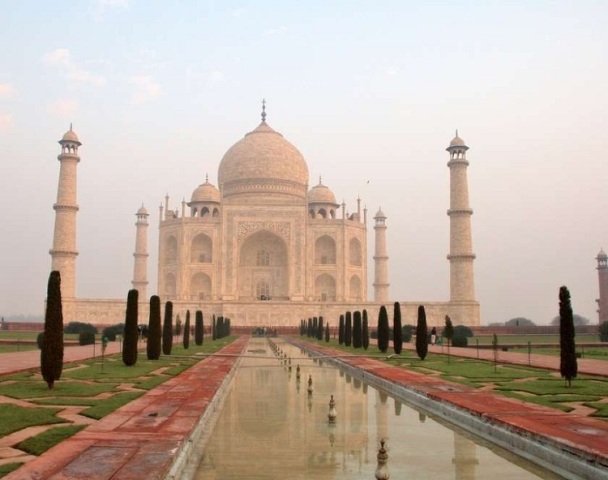 Image: Christian [email protected]
7 New Wonders Of The World
The Pyramid at Chichen Itza
The name Chichen Itza means “at the mouth of the well of Itza”. Itza is a political clan of people in the northern peninsula of Mexico, Yucatan. Built during the Mayan civilization, this pyramidal structure served as the political and economic center. The Chichen Itza consists of various temples, pyramids and interesting monuments, some being Steam Bath, the Great Ball Court, Temple of Chac Mool, the Hall of the Thousand Pillars, the Playing Field of the Prisoners and the Pyramid of Kukulkan (the last Mayan temple).
Christ the Redeemer
The statue of Jesus Christ, Christ the Redeemer, is located in Rio de Janeiro, Brazil. Standing at a height of 396 meters (130 ft), the statue is considered as the largest “Art Deco” statue in the world. It is located on the peak of 700 meters Corcovado Mountain, in the Tijuca Forest National Park, overlooking the city. Built in 1931, the statue was constructed over five years. It has become an icon for Rio and Brazil and symbolizes the warmth and welcoming spirit of the Brazilian people.
The Roman Colosseum
Situated in the city of Rome, Italy, the Colosseum or Roman Coliseum is an elliptical amphitheatre, constructed between 70 AD and 80 AD. Considered as one of the largest buildings of the Roman Empire, the amphitheatre was used for gladiatorial contests and public spectators. It was capable of seating a total of 50,000 spectators at one time. Though the building was destroyed in an earthquake, one can view its remains even today.
The Great Wall of China
The Great Wall of China is the largest man-made structure, stretching over 4,000 miles from Shanhaiguan in the east to Lop Nur in the west. The monument includes man-made walls as well as natural trenches and natural defensive barriers like hills and rivers. Built between 5th century and 16th century, the wall was originally built by the Ming Dynasty, to create a united defensive system and prevent invading Mongol tribes out of China. Locally available stones were used to build the wall sections over the mountains, while on land, earth, wood, bricks, lime, tiles and stones were used.
Machu Picchu
Meaning Old Settlement, Machu Picchu is a pre-Columbian Inca site located in Cuzco, Peru. Situated at a height of 7,970 feet above sea level on a mountain ridge in the Urubamba Valley, the site is also referred to as ‘The Lost City of the Incas’. Construction started in 1430 AD but was abandoned after 100 years. Hence, the magnificent city remained hidden from the outside world for hundreds of years, until discovered by an American historian, Hiram Bingham in 1911.
Petra
Declared a World Heritage Site in 1985, Petra is a historic and archaeological city in Arabah, Ma’an Governorate, Jordan. It is a rock city carved in red stone and is described as a “rose-red city half as old as time”. Constructed as the capital city of the Nabataean empire of King Aretas IV in 100 BC, it remained surprisingly unknown till 1812, until discovered by Swiss explorer, Johann Ludwig Burckhardt. It has been described as “one of the most precious cultural properties of man’s cultural heritage” by UNESCO.
The Taj Mahal
Taj Mahal is a white marble mausoleum, built by Mughal emperor Shah Jahan in the loving memory of his late wife, Mumtaz Mahal. Located at Agra, India, the Taj Mahal is believed to be the best representation of Muslim art in India. The construction started in 1632 and continued over 21 years, combining Persian, Indian and Islamic architectural styles. While the mausoleum was built in white marble, the other buildings in the complex were made of red stone. The Taj Mahal was declared a World Heritage Site by UNESCO in 1983 and is considered as one of the masterpieces of Mughal Empire.
Great Pyramid Of Giza (Honorary Candidate)
Also known as Giza Necropolis, the Giza Pyramid Complex consists of three pyramids known as the Great Pyramids and one huge sculpture called the Great Sphinx. The complex is located 25 kms southwest to the city of Cairo and 8 kms from the ancient city of Giza. The largest of them is the Great Pyramid of Giza, also known as the Pyramid of Chepos or the Pyramid of Khufu, with a height of approximately 450 feet. The pyramids were constructed around the 25 BC by some 35,000 skilled and non-skilled laborers. This is the only remaining wonder of the ancient world.
How to Cite