Jim Corbett National Park is the oldest national park of India. In this article, we provide the complete details of Jim Corbett Tiger Reserve.

Situated at the foothills of the Himalayas, in the state of Uttarakhand, Corbett National Park forms one of the most-visited wildlife reserves of India. Mainly known for housing a large population of tigers, leopards and elephants, the national park was established, initially as ‘Hailey National Park’, in the year 1936, making it the oldest national park in the country. Since then, it has been renamed twice - first, as 'Ramganga National Park' (1954-55) and then, as 'Jim Corbett National Park' (1955-56). With the launch of the ‘Project Tiger’ in India, Jim Corbett became one of the first national parks to be turned into a tiger reserve. 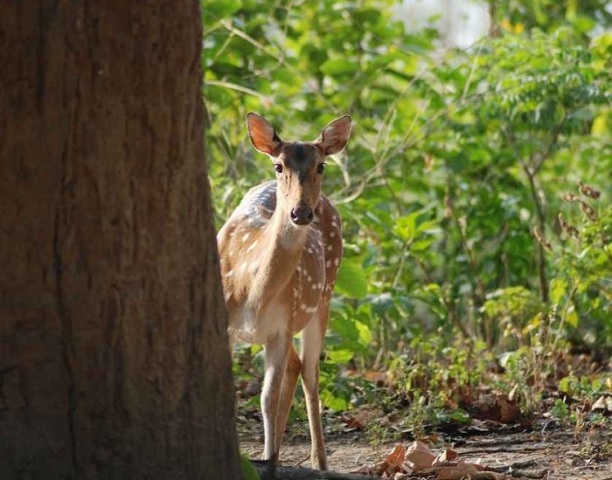 Image: [email protected]
Flora
Jim Corbett Tiger Reserve boasts of a very varied geography, which ranges from hilly and riverine areas to temporary marshy depressions, plateaus and ravines. The lowers areas of the park seem to be dominated by the presence of Sal trees. Apart from Sal, the main vegetation found here includes Khair, Sissoo, Ber, Kuthber, Bel, Chbilla, Dhak, Semal, Khingan, Kharpat, Rohini, Bakli, Pula and Bamboo. All in all, you can find around 488 different species of plants growing inside the precincts of the national park.
Fauna
Jim Corbett National Park is known for housing a significant population of tiger and its main prey, which comprise of four kinds of deer, wild boar, and other animals. Even, leopards and elephants are found in abundance here, with the former mainly sighted along the wooded areas of the park. Along with that, you will see three nocturnal cats here, namely the Leopard Cat, Jungle Cat and Fishing Cat. While Sloth Bear inhabits the lower regions of the park, Himalayan Black Bear is mainly sighted in the higher hills.
Amongst the other animals seen in Corbett are Wild Dog, Himalayan Palm Civet, Common Otter, Blacknaped Hare, Porcupine, Ghoral, Langur, Rhesus Monkeys, Jackal, Indian Grey Mongoose, otters, yellow-throated martens, Indian pangolins, etc. Those who wish to see reptiles should head towards the Ramganga River shores. Resting along the banks of the river, you will find the long-snouted, fish-eating Gharial Crocodile and ‘Mugger’ Crocodile. Corbett is also home to 7 species of amphibians, 7 species of fish and 37 species of dragonflies.
Avifauna
You will also find a wide variety of resident as well as migratory birds inhabiting the environs of Jim Corbett National Park. Amongst the 585 species of birds in the park, the most popular ones are Darter, Little Green Heron, Pond Heron, Crested Hawk Eagle, Booted Hawk Eagle, Pallas Fishing Eagle, Himalayan Greyheaded Fishing Eagle, Cinerous Vulture, Crested Serpent Eagle, Kestrel, Black Partridge, Kaleej Pheasant, Red Junglefowl, Common Peafowl, Redwattled Lapwing, Spurwinged Lapwing, etc.
Accommodation
Being a popular wildlife destination of India, Jim Corbett National Park is visited by a large number of tourists. As a result there are a number of forest rest houses, resorts, and hotels in Corbett. If you want to add luxury to your adventure, a stay at Manu Maharani Resort is just for you. Amongst the best 4-star hotels are Camp Riverwild, Infinity Resort and The Corbett Hideaway. For a combination of comfort and economy, the 3-star hotels, like Corbett Roop Resort, Corbett Suman Grand, Corbett Treff Hotel and Corbett Wilds Resort, will be the best pick.
How to Reach
By Air
The nearest airport from Jim Corbett is that of Phoolbagh (Pantnagar), situated at a distance of around 50 km.
By Rail
Ramnagar railway station, the terminus of Delhi - Moradabad - Ramnagar broad gauge branch of North East Railway, forms the nearest rail link.
By Road
Jim Corbett has a good road network that connects it with all the major destinations in the country.
How to Cite