Laser stands for Light Amplification by Stimulated Emission of Radiation. Find out about the history and invention of laser here.

A laser is an electronic optical device that beams strong light radiations. The term Laser actually stands for Light Amplification by Stimulated Emission of Radiation. What laser does is, it emits light rays in a very narrow, single colored beam with certain wavelength. It is quite different from say a light bulb which throws light over a very wide area at variable wavelengths. 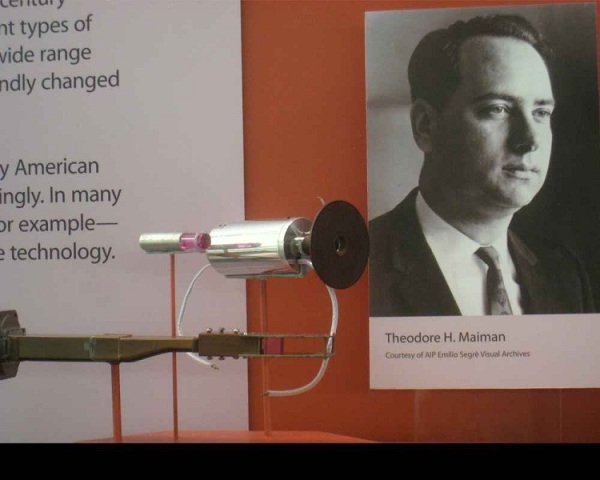 Interesting Information on Background of Laser
It is very interesting to know about the history of laser. The origin of the world’s first laser is credited to Theodore Maiman who showed the world the first working laser in the year 1960 at the Hughes Research Laboratories. Now, lasers have become a multi-million dollar industry. The most common use of these lasers can be easily seen in some of the optical devices that are in market these days like compact disc players and DVD players in which laser is widely used. Not only this, laser is also used to cut steel and other metal parts as well. It is used in the field of science, especially spectroscopy.
During 1917, in his paper Zur Quantentheorie der Strahlung, Albert Einstein talked about the invention of laser and even its predecessor known as the maser. Rudolph W. Landenburg, in the year 1928 confirmed the existence of stimulated emission and negative absorption. Later, in 1939, Valentin A. Fabrikant predicted the actual use of the stimulated emission to amplify some short waves.
James P.Gordon and Herbert J.Zeiger along with Charles H.Townes, in the year 1953 produced the first microwave amplifier, which was a device to operate on smaller principles of laser. It was not before 1957, that Charles Hard Townes and Arthur Leonard Schawlow began a serious study of the infrared laser. The term "laser" was introduced to the public in Gould's 1959 paper, titled 'The LASER, Light Amplification by Stimulated Emission of Radiation'.
Later, in the year 1960, the first working laser was made by Theodore H.Maiman at the Hughes Research Laboratories in Malibu, California. This beat the various research teams including those at the Towns Colombia University. Then, later that year, the Iranian physicist Ali Javan who was working with William R.Bennett and Donald Herriot made the first gas laser using helium and neon. Ali Javan, later went on to receive the Albert Einstein Award in 1993.
When lasers were invented back in 1960, they were generally called a solution for a problem. But since then, they have become quite a utility in various applications in every sphere of the modern society, which includes consumer electronics, information technology, science, medicine, industry, law enforcement, entertainment and the military.
In 1974, the first public laser was introduced in the way of barcode scanner at the supermarkets. The laserdisc player, introduced in 1978, was the first ever successful consumer product to include a laser. On the other hand a compact disc or CD player was the fist device that was equipped with laser which became a very common device in consumers' home. It was introduced in the year 1982.

Now, that you have read some interesting information on the history, origin and background of laser, you can go ahead and share this new gained knowledge with everyone.