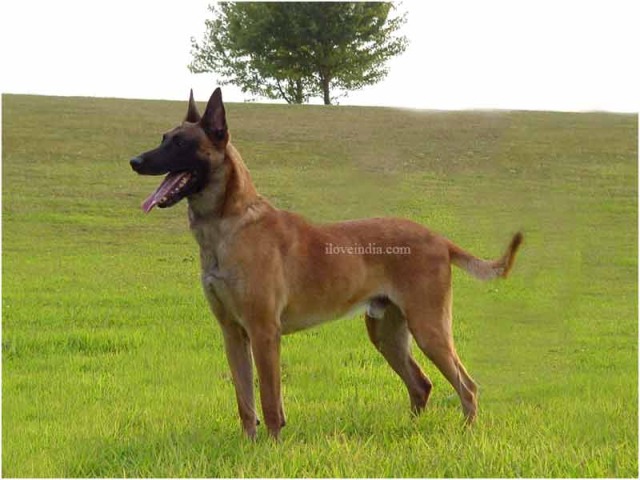 Height: 22-26 inches
Weight: 55-65 pounds
Coat Type: Smooth and short-haired
Also known as the Malinois or the Chien de Berger Belge, Belgian Malinoisresembles the German shepherd, especially around the face. It is a sturdy, but elegant-looking herding breed. Despite its sturdiness, it never looks bulky and in fact, is quite agile. The dog appears a little rectangular with a firm, alert-looking stance due to its angular dimensions. Being a sheepdog, the Belgian Malinois enjoys dirtying its pawns while doing hard work. The dog can best be kept in a well-ventilated and open apartment. It prefers cool climates and enjoys outdoors, but would rather stay with its owners. To know more about Belgian Malinois dog breed, explore this article further.
History
The history of Belgian Malinois dogs dates back to 1891, where a professor named Adolphe Reul discovered four types of dogs with similar behavior, the only difference being their coat and type. They were grouped as Belgian shepherds, and the Belgian Malinois was named so, due to its short coat and that fact that it was found around a region called Malines, in Belgium. The other varieties were Groenendael, Laekenois and Tervueren. Belgian Malinois breed has gained popularity worldwide only recently, because of its reputation as an excellent police dog.
Appearance
The Belgian Malinois is a sturdy, square-proportioned dog, featuring strong, straight front legs and muscular forequarters. The clean-cut head has dark brown, medium, almond-shaped eyes with an alert and intelligent expression. The triangular ears are stiff and stand straight up. It has a black nose, with a moderately pointed muzzle and strong, powerful jaws. The short, straight overcoat is hard and all-weather resistant, while the undercoat is dense. The coat color runs from rich fawn to mahogany, with the hair ends tipped in black.
Temperament
Belgian Malinois are generally active, friendly, protective and hard-working. Because of their serious, intelligent and alert demeanor, they are considered excellent watchdogs and guard dogs. The breed tends to be reserved with strangers and can be aggressive towards other dogs and animals. The dog should be socialized from an early age, to indulge with children. A bright and obedient dog, Belgian Malinois is determined and observant, with strong protective and territorial instincts. It should be treated as a part of the family and not be locked up in the kennel. It is a very demanding dog, as it requires daily exercise, along with training and companionship. The young ones prove to be excessively exuberant and playful.
Genetic Diseases
Belgian Malinois do not suffer from major health problems. Some minor concerns include cataracts, epilepsy, thyroid problems, skin allergies, progressive retinal atrophy (PRA), hip and elbow dyslexia and pannus.
Grooming
It is easy to groom the smooth, short-haired coat of the Belgian Malinois. Use a firm bristle brush to brush the dog weekly. Bathe the dog only if necessary, since bathing a lot will reduce the natural waterproofing of the coat. The dog often sheds lightly, but heavy shedding takes place twice a year. Due to their high energy levels, Belgian Malinois dogs should be given a lot of exercises, such as jogging and energetic play. 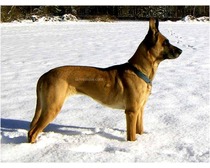 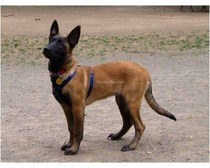