Height: 24-27 ½ inches
Weight: Up to 110 pounds
Coat Type: Straight, coarse and dense
Beauceron is a breed of herding dogs that originated in France. Also called Berger de Beauce or Bas Rouge or French Shorthaired Shepherd, Beaucerons are the largest French sheepdogs. They generally represent a healthy and hardy breed and live on for about 10-12 years. They are very energetic and are happiest when given a lot of space to run off the leash. Read on to find out more about the Beauceron dog breed.
History
The origin of the Beauceron breed can be traced back to the Renaissance manuscripts of 1578, in which the dog is mentioned as having spent centuries herding sheep and cattle on European farms. In 1863, Pierre Megnin differentiated two different sheepdogs, one with a long coat, named Briard, and the other with a short coat, named Beauceron. In the same year, the Beauceron was first exposed to the Canine Exposition in Paris. Both the Beauceron and Briard become members of the first shepherd dog club in 1897. with time, the breed gained popularity in Western Europe and North-America.
Appearance
Beaucerons are sleek, powerful, athletic-looking dogs, with a short and harsh coat. Their eyes are large dark brown, slightly oval and horizontal. They have straight ears, with a length equivalent to half of their head. The muzzle is pointed, dry and close to the jaws. Beauceron dogs have a black nose, with well-opened nostrils, slightly convex towards the end. The tail is carried down with no deviations to left or right, rather forming the shape of a 'J'. These dogs are found in two color combinations: black and tan, and harlequin (a mix of grey, black and tan). The black and tan Beauceron is black in color, with tan markings above the eyes, on the bottom of the upper lip and throat, two spots on the breast, bottom of each leg and under the tail. On the other hand, Harlequins have grey, black and tan patches, with the same tan markings as the black and tan Beauceron.
Temperament
Beaucerons are exceptionally intelligent and multi-talented dogs. They are calm, faithful, gentle, vigilant, loyal, and courageous and blend well with children. However, it is safe to set boundaries, as they can be rowdy with kids at times. They can be easily trained as they are frank and self-assured. Although dogs, they get along well with other dogs and cats as well. They are excellent as pets, both inside and outside the house. Some of their talents include tracking, herding, watchdog, police work, guarding, military work, agility, competitive obedience, French Ring Sport, and Schutzhund.
Genetic Diseases
The most common hereditary concern in Beauceron dog breed is hip dysplasia. Another major problem in these dogs is bloating. They should be taken to the vet on a regular basis and given two to three meals a day to prevent bloating. PRA and entropion are some other diseases that theses dogs can contract.
Grooming
The Beauceron coat doesn't require a lot of grooming. Since Beaucerons are average shedders, regular vacuuming is necessary, if they are kept indoors. Occasional baths and regular brushing is more than sufficient, but more attention should be paid when shedding. Beaucerons have double claws on their hind legs, which should not be removed. 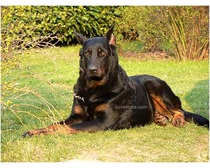 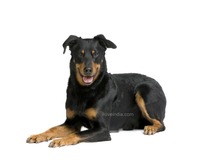