Alano Espanol dogs, a.k.a. Spanish Bulldog, are natural-born athletes, who will guard your home thoroughly. Read on to know all the facts related to this extremely loyal Alano Espanol dog breed. 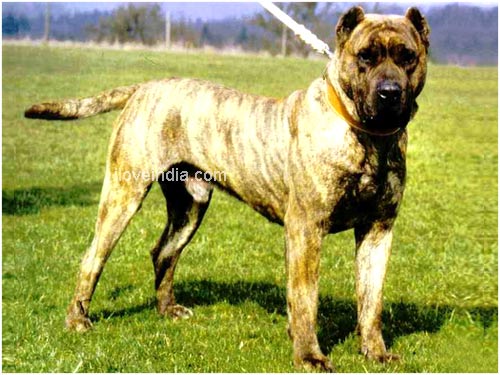 Weight: 38 to 45 kilograms (84 to 99 lb)
Height: Male - 23 to 25 inches (58 to 63 cm), Female - 22 to 24 inches (55 to 60 cm)
Coat type: Short and thick coat
Alano Espanol is an elegant ancient breed of dogs, which belongs to Spain. Also known as Spanish Bulldog in English, Alano is believed to have been brought by Alanos (Alans), who arrived in Spain as part of transhumance. This dog is particularly known for its physically fit and proportional body, which that allows it to keep up the speed of running for a long time. Having a primitive appearance, this dog breed is quite dominant, but with proper training, can be controlled by its master easily. In this article, we bring you details on the history, appearance, grooming, personality and genetic disease of Alano Espanol dogs.
History
Alano Espanol dogs were popular all over Spain, as they were used for Spanish bullfights, to capture slaves, for hunting and even as war dogs by Spanish explorers. However, with the passing time, stockyard became modernized and games like bullfights were banned. The outcome was that the dog breed was thought to become extinct by 1963. However, in 1970, the efforts of a group of veterinary students and fanciers brought them back to life, through surveys. Alano Espanols were bred once again and recognized as a separate bred. The breed is quite small in number in Spain. However, these dogs have been sent to North America, where they are being promoted for rare breed pet market.
Appearance
Alano Espanols are large, muscular, athletic dogs, with thick and short fur. They have powerful front end, which allows them to run for miles without being exhausted. They have a strong head, with calm and serious expression on their face. The face has double chin and is wrinkled, which gives them an older look. The ears are slightly rounded at the tip, with strong wide scissor-like jaws that are enough to fear anyone. The front legs are much stronger than the back legs. The thick fur coat includes colors like yellow and wolf gray, fawns and reds (in either light or dark tones) - with or without tigering (brindling) and/ or black mask. They have larger paws, as compared to other similar breed of dogs.
Personality
Alano Espanols are strong-willed dog that are generally silent and seem serious at the first look. However, they manifest extremely violent and aggressive behavior, by easily sensing danger on themselves or the person they guard. Hence, they can be truly termed as the most loyal friends of human beings. With proper training and grooming, these breed of dog turns into an extremely obedient and well mannered dog. Spanish Bulldogs are extremely affectionate to their masters and develop a strong bonding with them. They is extremely gentle and reliable with children.
Alano Espanol is a strong dog that completely ignores the feelings of pain and fear. Such dogs are friendly with almost every member of the family, but looks at strangers with suspicion, which makes them perfect housekeep dogs. They are powerful and protective as well and will not surrender until they are told to do so. Since earlier, Spanish Bulldogs were trained to hunt in packs; they are extremely sociable with other dogs and animals. However, they want to dominate the pack. Male puppies need more maintenance than their female counterparts.
Genetic Diseases
As a breed, Alano Espanol is extremely strong and healthy and can stand a large range of temperatures. These dogs are never bred for looks, as they are used to work hard in rough conditions for ages. They have a strong resistance and fast recovery system. However, it is advisable to test the dog for hip dysplasia, before breeding.
Grooming
Since it has short hair, Alano Espanol requires less grooming. It is an average shedder and an occasional brush would make it shed less hair. If treated as a family pet, the dog would need a lot of exercise, like three walks daily. If everything goes well, it can live up to 14 years. 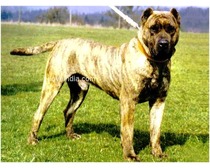 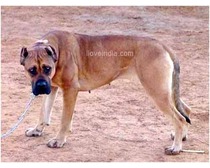