Florence is the capital city of Tuscany region in Italy and offers host of tourist attractions. To know more about things to do and places to see in Florence, read on. 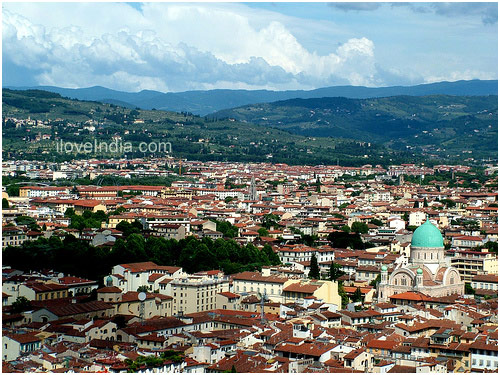 Languages: Florentine, Italian
Best Time to Visit: March to May and September to November
Time Zone: UTC+1
Driving Side: Right Side
Main Attractions: Basilica di Santa Maria del Fiore, Fountain of Neptune, Bargello Palace, Pitti Palace, Boboli Gardens, Uffizi Gallery
Florence is the capital city of the Italian region of Tuscany. It is a well known Italian city and lies on the Arno River. Florence is considered to be of great historical importance, especially in the middle ages and in the Renaissance, owing to the contribution it made in the field of art and architecture. The city is often referred as the source of the Italian Renaissance and is even called the Athens of the middle ages. Florence also served as the capital of the Kingdom of Italy from 1865 to 1870. It was a major centre of medieval European trade and finance. In effect, the city has a lot to offer to the tourists in terms of tourist attractions. For more information on places to see and things to do in Florence, read on!
Sightseeing
Some of the marvels worth seeing in Florence include the Basilica di Santa Maria del Fiore, which is a cathedral church (Duomo). It is known for the design of its dome, planned by Filippo Brunelleschi. Its exterior is made of polychrome marble panels in various shades of green and pink, bordered by white. Moreover, the dome is the largest brick and mortar dome in the world. Next is the Fountain of Neptune, which is a fountain situated on the Piazza della Signoria (Signoria square), in front of the Palazzo Vecchio. It is a masterpiece of art, designed by Bartolomeo Ammannati.
The Bargello, also known as the Bargello Palace or Palazzo del Popolo, is the Palace of the People. It is a former barracks and prison, which has been transformed into an art museum, housing works of Donatello, Giambologna, and Michelangelo. Besides, Pitti Palace is a huge Renaissance palace, situated on the south side of the River Arno. It now houses the largest art gallery showcasing collections of Medici family. Moreover, the Boboli Gardens are the most famous parks in the city. A distinguished collection of sculptures, dating from the 16th to 18th centuries, with some Roman antiquities, can be seen here.
Cultural Galore
Florence is undoubtedly a cultural nerve center, being the native land of some highly distinguished personalities of art and sculpture. It is indeed a paradise for art lovers, as it gives them an opportunity to witness and enjoy the works of legendary art maestros. Uffizi Gallery is a must visit place, as it is one of the oldest and most renowned art museums in the world. It houses some world class paintings of classic artists. Do make sure to visit the Bargello Tower with sculptures of the Renaissance, the museum of San Marco with Angelico's works, the Academy, the chapels of the Medicis and Buonarroti’s house with sculptures of Michelangelos, to get a glimpse of the Renaissance culture.
Monuments
Florence houses some marvelous architectural buildings within its bounds. Some of the not-to-be-missed monuments in the city include the Basilica di Santa Croce, which is one of the largest churches in Florence. It contains the tombs and memorials of famous Florentines and Italians. Tempio Maggiore Great Synagogue of Florence is an artistically magnificent building, exhibiting a blend of Islamic and Italian architecture styles. Ponte Vecchio is the old bridge in the city, famous for the small shops located on its sides. Apart from this, Ponte Santa Trinita located here, is one of the most beautiful bridges in Italy and Europe. 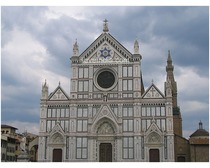 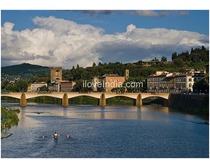