Berne, the capital of Switzerland, is one of the major tourist attractions of Europe. Check out information on places to see and things to do in Bern.

Languages: German, Bernese German, French
Best Time to Visit: May to September
Time Zone: UTC+1
Driving Side: Right Side
Main Attractions: City Center, Zytglogge, Munster, the Federal Palace, The Historical Museum of Bern, etc.
The city of Berne, also known as Bern, is the capital city of Switzerland. It is the fifth populous city in the country, after Zürich, Geneva, Basel and Lausanne. Bern also serves as the capital of ‘Canton of Berne’. The city was supposedly founded by the Duke Berchtold V of Zähringen, on the River Aare, in 1191. It is alleged that Berne was named after a bear (Bär in German) he had killed. The city serves as a political hub of the state. Besides, it is also a popular tourist spot, frequented by visitors every year. There are a number of tourist attractions in Berne, making it a thriving place for vacation. To know more about the places to see and things to do in Berne, read on.
Sightseeing!
Berne has some exotic locales to offer to its visitors. One of the must visit sites in Berne is the City Center, which is a UNESCO Cultural World Heritage Site. Mainly medieval in architecture, the most spectacular attraction here is the Zytglogge, which is an elaborate clock tower with moving puppets. Next is the Munster, which is a 15th century Gothic cathedral. Apart from this, there is the old Town Hall, famous for its ancient sights. The Federal Palace of Switzerland is also situated here, housing the Swiss Federal Assembly and Council. Besides, the fountains located in front of the Federal Palace are also worth seeing.
Museums
The city of Berne houses plenty of museums, which explicitly represent its rich cultural, historical and imperial heritage. The Historical Museum of Bern is the second largest in Switzerland. Built in 1894, the museum exhibits collections of history of Bern, from prehistory to the present, and other permanent exhibitions from Asia and Egypt. It is a heritage site of national significance. Some of the other worth-visiting museums in the city are Museum of Arts, Art-Hall, Psychiatry Museum, Historic Museum, Natural History Museum, Alpine Museum, Einstein House, Marksmen Museum, etc.
Entertainment
Berne provides immense entertainment opportunities to the visitors. Along with enjoyment, you can also get an insight into the cultural background of the place. The city houses a number of theaters and opera houses, where you can witness some classic performances and music. Moreover, there are a variety of fairs and festivals organized in Bern, which spreads vibrancy and enthusiasm all over. Some of the important festivals are Gurtenfestival, Queersicht, Buskers, etc. Zibelemärit (onion market), an annual fair held on the fourth Monday of November, is a great attraction here. 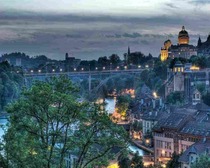