Helsinki is the largest and the capital city of Finland, offering varied things to do. Check out the major tourist attractions and places to see in Helsinki.

Languages: Finnish,Swedish
Best Time to Visit: May to September
Time Zone: UTC+2/+3
Driving Side: Right Side
Main Attractions: National Museum of Finland, Helsinki Museum, Kiasma Art Museum, Senate Square, Helsinki Cathedral, Suomenlinna
Helsinki is the largest city of Finland, apart from being its capital. It is located on the shore of the Gulf of Finland, along the Baltic Sea. It is the most populous municipality in Finland. The city carries great importance, as it is the corporate, educational, research, cultural and governmental hub of Finland. The original name of the city is Helsingfors, which is still referred to as the official name. The city was founded in 1550, by King Gustav I of Sweden. Helsinki also accounts for the highest immigrant population in entire Finland. Moreover, the city offers a plethora of tourist attractions to the visitors. Know more about the things to do and places to see in Helsinki.
Sightseeing
The sightseeing tour of Helsinki will take you across exotic locations. Senate Square is a unique allegory of political, religious, scientific and commercial powers. There is a statue of Alexander situated in the center of the square. The Helsinki Cathedral is located in the vicinity of the Senate Square. It is a remarkable piece of neoclassical architecture. The church houses zinc statues of the apostles on the roof, which are the biggest in the world. Another must visit spot is Suomenlinna, which is an inhabited sea fortress within the city region. It is a UNESCO World Heritage site, which is quite popular amongst tourists.
Museums
The National Museum of Finland displays an array of historical collection, dating back from the prehistoric era to the 21st century. The architecture of the museum is quite impressive and forms a major tourist attraction. The next is Helsinki Museum, which gives an insight into the 500 year old history of the city. Besides, Kiasma Art Museum is also a worth visiting place, as it exhibits the contemporary art collection of the Finnish National Gallery, founded in 1990. Ateneum Art Museum is a huge museum in the city, which showcases the biggest collections of classical art in Finland.
Entertainment
There are a number of entertainment options available in the city of Helsinki. The Korkeasaari Zoo is the best place to unwind. The zoo can be easily reached via a boat from the market square. It houses varied animals from Finland and around the world, in large natural enclosures. Korkeasaari Zoo even undertakes breeding programs of snow leopards, snowy owls and bearded golden vultures. Apart from this, Linnanmäki Amusement park is another suitable option for a family picnic.
It is the oldest amusement park in Finland and houses as many as thirty-seven exquisite rides. As it is located on a hill, it gives a spectacular view of the city. Besides, you can have a glimpse of the culture of the city by visiting the various theaters and opera houses here. You can enjoy the traditional music and theatrical performances and quench your thirst for quality recreation. Apart from this, there are many bands operational in the city, which can be listened to soothe your spirits. 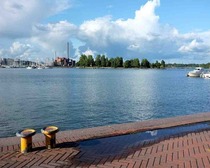