The state of Massachusetts in United States is a perfect tourist destination blending the modern with historic. Read about fun things to do and see when touring Massachusetts.

Languages: English, Spanish, Portuguese, French, Italian
Best Time to Visit:  During autumn when the leaves are changing colors and the scenery is remarkable.
Time Zone: GMT - 5
Driving: Right side
Emergency: 911
Main Attractions: Boston, Worcester, Springfield, Lowell, Cambridge, Brockton, New Bedford, Fall River, Quincy.
Massachusetts is a state situated in the New England region of the northeastern United States. A very picturesque state, Massachusetts is also an important historical place. As such though very modern, visitors also get too see a vivid glimpse of Massachusetts that used-to-be through its various extant monuments and museums. Comprising of about 350 towns and cities, Massachusetts offers tourists ample options as far as place attractions and ‘fun things to do’ is concerned.
Boston
The capital city of Massachusetts, Boston, is one lively place. It happens to be a hub for all business, culture, dining and nightlife for the locals as well as the tourists. When here, do not miss to visit the Freedom Trail in Boston. Freedom Trail is actually a 2.5 mile path lined with historic structures and places like the Old North Church, the Bunker Hill Monument, The Boston Commons (America's first park) etc. Among the well-known modern structures at Boston, you can see the John Hancock Tower, from which you can catch a breathtaking view of Boston.
Cambridge
Just across the Charles River is Cambridge. The city was named in honor of the University of Cambridge in England. You can visit the prestigious Harvard University and the Massachusetts Institute of Technology here. At Harvard Square, you will find many amateur performers showing their skill. If you are a foodie, then do not miss out on tasting some of the local spicy food at the eateries here.
Cape Cod
Cape Cod, simply called the Cape, is an arm-shaped peninsula forming the easternmost portion of Massachusetts. Cape's small town atmosphere and enticing sandy beaches draw heavy tourists each year. There are numerous little shops here from where you can buy memorabilia. Gayhead Cliff, a mountain cliff in Dukes, Massachusetts provides scenic view of the coastline and the surrounding rocky hills.
Salem
The city of Salem in Massachusets is well-known for its witch crafts of 1692, which caused the death of 32 people. If you come around October, you will get watch the local ‘Halloween’ festival of ghosts and spirits celebrated here annually. You will see people dressed up as all types of creepy creatures, which should be really fun. Salem also houses the Derby Wharf, the 1818's Customs house, the Witch Museum and other such places.
Springfield
Springfield in Massachusetts is famous because of its museums. Visit the museum at the Quadrangle here comprising a set of four museums - George Walter Vincent Smith Art Museum, The Springfield Science museum, The Connecticut Valley Historical museum and the Museum of Fine Arts. There is also an aquarium, dinosaur and wildlife displays. Children can enjoy the ‘please touch’ exhibits and the bronze sculpture garden of Dr. Seuss.
Southeastern Mass / Southeastern Massachusetts
Once here, you can visit towns like Plymouth, Bristol, Dartmouth, etc. It is in these parts of Massachusetts that you get to see some really fascinating outdoor museums like The Plimoth Plantation. Nearby from this museum is the Mayflower II, a reproduction of the infamous ship that brought 102 pilgrims from Holland and England in 1620, who settled down here. Then, you can also visit the famous amusement park, Edaville Railroad, the New Bedford Whaling museum, Battleship Cove maritime museum, etc. Southeastern Mass is also blessed with a number of beautiful and unspoiled beaches.
Northeastern Mass / Northeastern Massachusetts

When in this region of Massachusetts, do visit the two cities of Glouchester and Rockport popular for their rocky coasts, parks and fishing. Other well-known cities you can visit in the Northeastern Massinclude Lowell, Salem, etc. People come here especially in summers for whale watching and to laze out on beaches. You can spot the ‘Man on the Wheel’ statue here in honor of the fishermen who went down the sea. Halibut point, a state park, in the Rockport-Glouchester area is one nice place to picnic. 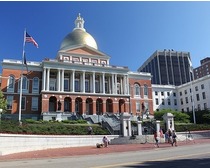