Los Angeles is the largest conurbation of California. Check out what to do in Los Angeles.

Language: English, Spanish
Best Time to Visit: November to May (Winters)
Driving Side: Right
Weather: Hot & Humid
Time Zone: PST (UTC-8), Summer (DST) PDT (UTC-7)
Emergency Numbers: 911 for all Emergencies
Los Angeles, the second largest metropolis in the United States, is snuggled cozily in Southern California. It is amongst the world’s well-known centers of culture, technology and global trade. Also called L.A., it is quarters to innumerable professional and cultural institutions. Besides all other things, what actually brought true recognition to this alpha world city is, Hollywood. Yes, Hollywood that is renowned not only for its motion pictures, shows and theater but also for its scintillating nightlife. Los Angeles, amidst scores of tourist places, attracts millions of people from throughout the world in spite of its warm and sultry weather. Read further about places not to be missed out in L.A.
Places To See
There is a long queue of attractions to be seen in Los Angeles, for example, Chinatown, Koreatown, Little Tokyo, Kodak Theatre, Griffith Observatory, Getty Center, Walt Disney Concert Hall, Los Angeles Memorial Coliseum, Los Angeles County Museum of Art, Grauman's Chinese Theatre, Los Angeles California Temple, the Cathedral of Our Lady of the Angels, Hollywood Boulevard, Capitol Records Tower, Hollywood Bowl, Dodger Stadium, Watts Towers, Staples Center, Dodger Stadium and Olvera Street, are to name a few.
Hollywood Boulevard
Certainly the most important place, where you’ll see many dream destinations in a vast expanse. Explore the Walk of Fame, Grauman's Chinese, the Hollywood Plaza, the Wax Museum, the Hollywood Bowl, the Rock Walk, Griffith Park, Bob Hop Square, the Crossroads of the World and the Ripley's Believe it or Not; get swayed by the lavish display of grandeur. Apart from many such attractions, you must experience the dazzling nightlife of the Hollywood.
Mulholland Drive
Mulholland drive would be an all-together different experience in conjunction with wide roads and amazing views. It is definitely worth driving if you’ve your own transport. Above all, this site has been the background for many Hollywood movies and first kisses. One can reach here by heading towards Highland Ave into the Cahuenga Pass. Be alert, while driving here because the avenue is marked by speeding cars.
El Pueblo
El Pueblo, or else called Olvera Street, is the historic center of Los Angeles. In fact, the angel city has derived its name from the mission established here (Misión de la Nuestra Señora la Reina de Los Ángeles - the Mission of our Lady the Queen of the Angels). Sited near the Union Station, it is also home to the oldest building of L.A. Close to the site, there are numerous Mexican restaurants and shops to delight your senses.
The Getty Center
Situated atop Santa Monica Mountains, Getty Center is a perfect place for art lovers. It is also known as J. Paul Getty Museum. From here, you can relish the picturesque vista of L.A. basin, the Pacific Ocean, the spectacular buildings and the rose gardens. Its extensive arts collection would definitely please you to the core. In Pacific Palisades, J. Paul Getty Villa (the old museum) is another captivating attraction worth-visiting.
Things To Do

Once again the Hollywood gets the utmost attention, so don’t forget to visit this glittering world. Also check out the exclusive shops at Rodeo Drive to shop your heart’s content. Take a stroll on Venice Beach, and glimpse the beach culture, including street performers, tacky shops, etc, of L.A. from close.  Visit the Knott's Berry Farm and indulge in the theme park, where family shows and rides are never short. If you want something extra, then visit the Queen Mary, the largest ship,and get impressed by her elegance. 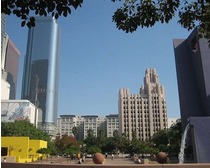