Milan is one of the largest cities in Italy and offers many exciting tourist attractions. Check out the places to see and things to do in Milan.

Language: Italian, Insubric
Best Time to Visit: May to September
Time Zone: UTC+1/+2
Driving Side: Right Side
Main Attractions: The Milan Cathedral, the Duomo, Biblioteca Ambrosiana, the Galleria Vittorio Emanuele II, Castello Sforzesco, Santa Maria delle Grazie
Milan is one of the largest cities in Italy, with a large metropolitan area. The city is renowned as one of the world capitals of fashion and design. There are a number of fashion houses and shops in the area. Milan is also dotted with shopping malls, providing lucrative deals to the customers. The city hosted the World Exposition in 1906 and will also host the Universal Expo in 2015. Though the city is not the capital of the state, it is still regarded as its business hub. It is also seen as a popular tourist and holiday destinations, offering varied tourist attraction. Check out more on places to see and things to do in Milan.
Sightseeing
There are a number of places to see in Milan. The Milan Cathedral is one of the most striking structures in the city. It is the seat of Archbishop of Milan and even played significant role in the establishment of Catholic traditions. The Duomo houses the largest collection of marble statues and the golden Madonna statue. Biblioteca Ambrosiana is a historical library in Milan, which also houses the drawings and notebooks by Leonardo da Vinci.
Galleria Vittorio Emanuele II is another architectural structure, which is covered with double arcade, formed of two glass-vaulted arcades at right angles, intersecting in an octagon. Castello Sforzesco is a castle, which now houses many city museums and art gallery collections. Besides, Santa Maria delle Grazie is a known church and convent in Milan, included in the UNESCO World Heritage Sites’ list. It is known for the mural of the Last Supper by Leonardo da Vinci, located in the refectory of the convent.
Dining & Shopping
Milan has its own regional cuisine, offering sumptuous food to be savored by the visitors. The cuisine includes "cotoletta alla milanese", a breaded veal made of pork and turkey cutlet pan-fried in butter. Another specialty here is the salame milano, salami with very fine grain. It is also best known for its Milanese cheese, known as gorgonzola. You can treat yourself with all these delicacies and much more at the various quality restaurants located within the city. Apart from this, Milan is a paradise for shopaholics. For designer shopping, visit Quadrilatero, around Via Montenapoleone and Via della Spiga. For a stroll, try the Navigli or the Brera, which will give you trendy, arty vibes.
Cultural Galore
Milan has no dearth of options for its visitors, as far as entertainment is concerned. There are a number of opera houses and art galleries in the city. One of the most significant places to be visited is The Teatro alla Scala or La Scala. Inaugurated on 3 August 1778, it is one of the most famous opera houses in the world. The opera house also gives way to the La Scala Museum. It exhibits an extraordinary collection of paintings, drafts, statues, costumes and other documents regarding opera and La Scala's history. 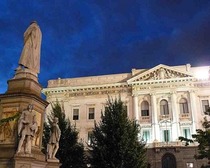