Sicily is a popular region in Italy and offers host of tourist attractions. To know more about things to do and places to see in Sicily, read on.

Languages: Italian, Sicilian
Best Time to Visit: Throughout the Year
Time Zone: UTC+1
Driving Side: Right Side
Main Attractions: the Valley of Temples, Necropolis of Pantalica, Teatro Greco, Trevelyan Gardens, Museo Archeologico, . Museo Siciliano d'Arte e Tradizioni Popolari
Sicily is one of the largest islands in Mediterranean and an autonomous region of Italy. The city has acquired a significant position since the ancient times, mainly due to its strategic location with reference to the Mediterranean trade routes. Though the city is a part of Italy today, it was once an independent country, known as the Kingdom of Sicily. Sicily is a highly enriched place, in terms of arts, cuisine, architecture and language. It is of great importance archeologically and is a thriving tourist destination as well, offering a variety of attractions. Check out the various things to do and places to see in Sicily.
Sightseeing
Sicily is a hot spot amongst those in love with ancient architecture. The major tourist attractions in the city include two UNESCO World Heritage Sites i.e. the Valley of Temples and Necropolis of Pantalica, which houses over 5000 tombs dating back to 13th and 17th centuries. Next is Teatro Greco, which is the Greek Theatre that serves as the venue of an arts festival is summers. It is located amidst extremely picturesque surroundings and is a treat for the visitors. Moreover, Trevelyan Gardens are one of the most beautiful and peaceful gardens in the city. They accommodate a bar and a play area for children.
Museums
There are a number of classic museums in Sicily. Museo Archeologico, located in the fourteenth-century Badia Vecchia Tower, exhibits a sword, dating to the Byzantine era, along with several fragmentary statues, a carved child's sarcophagus and attractive Roman vases. Museo Siciliano d'Arte e Tradizioni Popolari is a folklore museum offering glimpses into the traditions of the island over centuries, with items ranging from bagpipes to playbills.
Dining
Being in Italy means that you will certainly have enough opportunities to pamper your taste buds. Sicily is no exception and offers a wide variety of cuisines and wines, the reason why it is also known as God’s Kitchen. Moreover, these dishes are also referred to as healthy, due to the extensive usage of fresh fruits and vegetables. Do not forget to taste the sweet dishes, which are the specialty here. Cannoli, a tube-shaped, fried and filled pastry is particularly famous and associated with Sicily worldwide.
Cultural Galore
Sicily is one of the best places to get an insight into the cultural aspect of Italy. The city has been associated with many poets, writers, philosophers, intellectuals, architects and painters, who have left their legacy in the form of various masterpieces of art. There are a number of opera houses within the bounds of the city, which will provide you with entertainment as well as information. Palermo is the largest opera house in Italy and the third largest in all of Europe.
Adventure
There are a number of beaches in Sicily, which serve to be excellent spots for fun and adventure. One can easily relax on the sandy beaches and even resort to swimming to work up the lazy muscles. Apart from this, Isola Bella is a beautiful nature reserve here, which provides ample opportunities for enjoyment. To top it all, the more adventurous lot can satisfy themselves by opting for a hiking and skiing trip to Mount Etna. 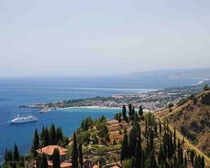