Turin is an important city in Italy and offers many exciting tourist attractions. Check out the places to see and things to do in Turin.

Language: Italian
Best Time to Visit: May to September
Time Zone: UTC+1
Driving Side: Right Side
Main Attractions: Mole Antonelliana, The Palatine Towers, The Turin Cathedral, The Palazzo Reale, The Residences of the Royal House of Savoy, Orto Botanico dell'Università di Torino
Turin is the capital city of the Piedmont region in Italy. Situated on the right bank of River Po, it is surrounded by an Alpine arch. The city holds great importance as it is the business as well as the cultural center of the state. In fact, it ranks third economically. The city is also known for being the land of Shroud of Turin Juventus FC, the football club and even hosted the Winter Olympics of 2006. It is also accommodates the headquarters of Fiat and Lancia automobile manufacturers. In effect, it is known as the ‘Automobile Capital.’ It also served as the capital of the Dutch of Savoy, the Kingdom of Savoy and eventually of the unified Italy. For this reason, Turin is also known as ‘the Capital of the Alps’ and ‘the Subalpine Capital’. Thus, there are a number of places to see and things to do in the city. To know more about the tourist attractions, read on.
Sightseeing
While going on the sightseeing tours of Turin, you will be enthralled by the various tourist attractions. The Mole Antonelliana is a major landmark in the city of Turin. It is considered to be the tallest museum in the world. Though it was constructed as a Jewish Synagogue and now houses the National Museum of Film. It was the official emblem of the 2006 Winter Olympics. It is also the official emblem of the 2005 World Bocce Championships and the 2006 World Fencing Championships. The Palatine Towers are an ancient Roman building near Palazzo Reale. The Turin Cathedral is also quite popular here as it houses the Shroud of Turin.
One can view artifacts relating to the shroud, as well as a video regarding the shroud and other historical artifacts. The Palazzo Reale is a royal residence in Turin, which was built in the seventeenth century for Madama Reale Christine Marie of France. The Residences of the Royal House of Savoy are group of structures, which are listed amongst the UNESCO World Heritage Sites. Orto Botanico dell'Università di Torino is a botanical garden and arboretum maintained by the University of Turin. Located along the Po River it is a great place to unwind.
Dining
When in Turin, don’t forget to savor the Italian delicacies, which will add to your traveling experience. There are some fine dinning restaurants and food joints to pamper your taste buds. Besides, Turin is also the birth place of solid chocolate. Don’t miss a bite of the locally popular Gianduiotto chocolate. The best time to do so is during CioccolaTÒ, a two-week chocolate festival organized every year. It features local as well as big international chocolate brands as well.
Entertainment
Turin offers varied entertainment options for the visitors. There are a number of discos, pubs and bars to quench the recreational needs. The dance clubs offers groovy international tunes to shake a leg in the company of wacky DJs. In case you just wish to savor your favorite drink in the quiet hours of the night, then wine bars are the right options for you. Here, you can choose from a wide array of wines. It is an ideal place to taste local wines which are known for their unique taste. 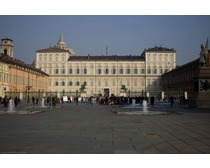