Buenos Aires is the capital and the largest city in Netherlands, with varied tourist attractions. Check out some interesting things to do and places to see in Buenos Aires.

Languages: Spanish, English, French, German
Best Time to Visit: Throughout the Year
Time Zone: GMT/UTC - 3
Driving Side: Right Side
Main Attractions: the Obelisk, Avenida 9 de Julio, The Buenos Aires Metropolitan Cathedral, Plaza de Mayo, National Library
Buenos Aires is the capital city of Argentina and also its largest city. However, it is quite different form the Greater Buenos Aires Province, of which it was earlier a part. After some internal conflicts faced by the region, Buenos Aires was separated from the Greater Province, in 1880. The city was initially named after the sanctuary of "Nostra Signora di Bonaria", in Cagliari, Sardinia. In 1994, the city finally became autonomous and was renamed. This has led to the growth of tourism sector in Buenos Aires. The city offers plethora of tourist attractions. To find out more about the places to see and things to do in Buenos Aires, read on.
Sightseeing
The worth-visiting sites in the city include the Obelisk, which is a landmark located in the heart of the city. It was built in 1936, to commemorate the 400th anniversary of the first founding of Buenos Aires. Next is the Avenida 9 de Julio, which is an avenue, with its name honoring Argentina's Independence Day. The Buenos Aires Metropolitan Cathedral is the main Catholic Church in the city. The Plaza de Mayo is the main square in Buenos Aires and houses many historical landmarks. Book lovers can also visit the National Library here, which is the largest in entire Argentina.
Casa de Gobierno also known as the Casa Rosada is the Argentine ‘White House,’ which contains the office of the President of the Republic. It has richly laden interiors. Iglesia del Pilar is another landmark, which has skulls and bones at the entryway, leading to a silver altar. It is considered one of the best - preserved examples of Argentine colonial architecture due to its intriguing tile work at the church. Museo de la Policia Federal is the Museum and Historical Research Division of the Federal Police. It displays institution history, including technical and crime-related aspects through mannequins, photographs and a collection of firearms, sabers, shields and emblems.
Cultural Galore!
The city of Buenos Aires offers some interesting cultural avenues for the visitors. There are a number of opera houses, orchestras, cinema halls within the bounds of the city, to entertain the visitors. It is the site of Teatro Colon, one of the greatest opera houses in the world. Buenos Aires also boasts of the largest concentration of active theaters. Thus, you can enjoy some classic theater performances and melodic music presentations. You can also groove to the steps of Tango Dance, which is the specialty of the place, during the various festivals held here.
Entertainment
Being the birth place of tango, it is laced with a number of tango bars, parlors and stage shows. To commemorate the spirit of the dance form, every year Buenos Aires Tango Festival is celebrated in the month of March. This is one of the biggest crowd puller, escalating the rate of tourism during the month. Besides, the city offers a thriving nightlife, which is at its peak from Thursday to Sunday. Do not forget to visit Café Tortoni, which is amongst the city’s most famed cafes, offering live tango and jazz in La Bodega downstairs. Owing to the various entertainment options it offers, it is also referred as the ‘Paris of South America’. 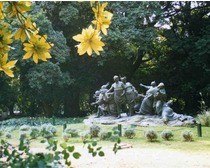