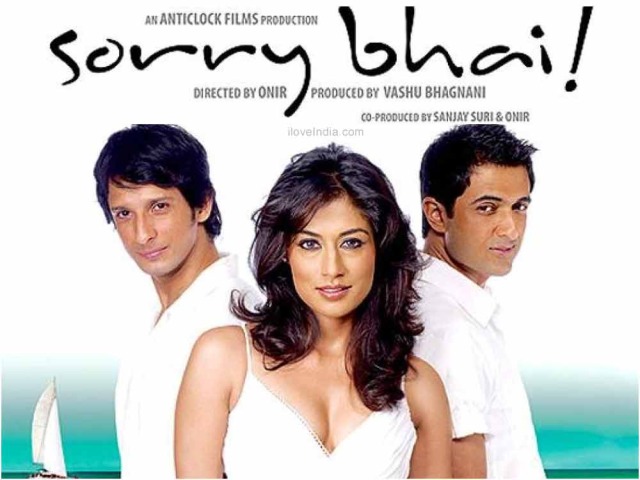 
'Sorry Bhai' already had a sorry attached to it, so you will not have to seek it in case you don't like it. The movie is neither too good, nor too bad. Talking about negative aspects, its story is very clichéd, with the characterizations being even more conventional. Harsh is the typical career-obsessed guy, with no time for family or his lady love. His fiancée Aaliyah shares too many interests with his brother Siddharth and falls in love with the latter almost instantly. Then, there is the postponement of marriage at the eleventh hour and more such stuff.
There is one good thing about 'Sorry Bhai' and it is that the director has handled the clichéd script in a very different manner. Instead of being melodramatic and overemotional, the movie has a light-hearted, cheerful and carefree appeal. The humor comes, not from deliberately funny situations, but intentionally-penned hilarious lines. Even in the most heavy-headed situations, the jovial mood has been maintained. Had it not been there, the movie would have surely turned into a bore!
Amidst all the joyfulness, 'Sorry Bhai' also manages to maintain an end with just the right amount of sensitivity. Performance-wise, there are hardly any complaints in the movie. Chitrangda Singh is looking ethereal and plays her part with complete conviction. She is the new face to look out for! As for Sharman Joshi, it was a refreshing change to see him in a role that did not require much comic timing. Sanjay Suri was as good as ever, while Shabana Azmi and Boman Irani were as usual, par excellence.
Sorry Bhai Pre-release Review
The romantic comedy flick ‘Sorry Bhai!’, a directorial venture of Onir, is all set to hit the silver screens on 28th November 2008. Nanette Natal and Amitabh Varma have provided the lyrics to the songs composed by Gaurav Dayal and Vivek Philip. Produced by Onir, Vashu Bhagnani and Mumbai Mantra, the film will be released under the banner of 'Anticlock Films' and 'Puja Films'. ‘Sorry Bhai’ boasts of an impressive star cast, comprising of Sanjay Suri, Sharman Joshi, Chitrangda Singh, Shabana Azmi and Boman Irani.
In ‘Sorry Bhai!”, Sharman Joshi plays one of the lead characters - Siddharth Mathur, a shy but charming young scientist, who travels to Mauritius for his elder brother Harshvardhan’s (Sanjay Suri) wedding. He is accompanied by his mother Gayatri (Shabana Azmi), who is least interested in going for the wedding, as she is angry with her elder son Harsh for marrying a girl of his choice, without consulting parents. Also traveling with Siddharth is his joyful father Navin (Boman Irani), who finds it quite entertaining to pull Gayatri’s leg.
Harsh is all the time busy with his work and finds no time to spend with his fiancée Aaliyah (Chitrangda Singh). Rather, it is his younger brother Siddharth, who takes her for sightseeing in Mauritius. They both end up spending loads of time together and eventually feel attracted towards each other. Aaliyah starts feeling neglected by her career-obsessed fiancée Harsh. She cannot hide her heartfelt feelings for Siddharth, who also isn't able to overcome his obsession for his brother’s fiancée. The story then gets lots of twists and turns, as Gayathri becomes suspicious of Siddharth and Aaliyah. ‘Sorry Bhai!’ is a fun romantic comedy movie, which promises to make your smile with tears!
How to Cite