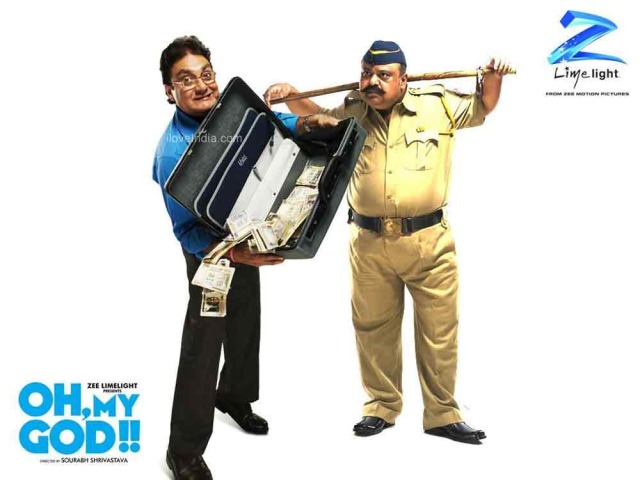 
After watching the movie, our reaction was also 'Oh My God!', though with a much negative connotation. The movie starts on an extremely slow pace, with many scenes being totally out of context. Rajendra's (Vinay Pathak) conversation with God as well as his jagran performance is overstretched, while the dinner with boss serves no purpose at all. Many other scenes that follow would have done with some major editing.
God, played by Saurabh Shukla, does not seem impressive in a tight white suit and the way Shukla behaves does not suit the mannerisms of the Almighty. Shukla's fancy dress parade, taking the form of a lottery seller, a shady criminal and a cop, comes across as a futile attempt at humor. The ploys, that 'God' devises, to make Rajendra rich were too clumsy. You cannot even expect a kid to fall for something like this.
One good thing about the movie is the moral at the end, that people should appreciate the smaller pleasures in life, rather than running after money all the time. While the venture came as an amateurish attempt at filmmaking, the performances saved the day, to quite an extent. Vinay Pathak and Divya Dutta gave an intense performance, while Saurabh Shukla could have done better. Gaurav Gera and Harsh Chhaya did okay! This one's, at the most, a DVD watch!
Oh My God! Pre-release Review
Vinay Pathak seems to be on a roll these days. His 'Dasvidaniya' has just hit the theaters and now; he is all set to star in a comedy flick - 'Oh My God!'. Apart from Vinay, the movie stars Divya Dutta, Saurabh Shukla, Harsh Chhaya, Gaurav Gera and Pubali Sanyal. It has been produced by Zee Limelight and will be released under the same banner. The directorial venture of Saurabh Srivastava, 'Oh My God!' has Bapi-Tutul as the music directors and it will hit the screens across India on 5th December 2008.
The story of 'Oh My God!' centers on Rajendra (Vinay Pathak), a simple man who has dreams of making it big in the world. A salesman by occupation, he considers Late Shri Dhiru Bhai Ambani as his idol. He wants to follow in Dhiru Bhai's footsteps and become successful as well as famous, but through ethical ways. His wife Suman (Divya Dutta) loves him very much and is always there to stand by his side and believe in his efforts. Still, Rajendra continues to fail in his various money-making schemes, one after the other.

Anguished over her husband's failures, Suman pleads with God to help him. As it happens, God decides to respond to her prayers and tries to help Rajendra. He comes across Rajendra in human form (played by Sourabh Shukla) and brings the former forth many opportunities. However, Rajendra fails to recognize this and his encounter with God often ends up in a hilarious situation, leaving the latter frustrated. Will Rajendra be able to grasp the opportunities that God throws his way or will he remain an ordinary man, with extra-ordinary dreams?