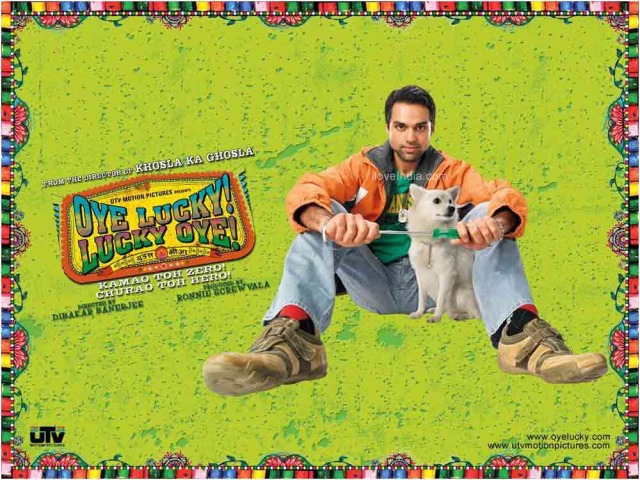 
The film 'Oye Lucky! Lucky Oye!' hit the theaters and guess what…it really got lucky. The first thing that strikes you about the movie is that it does not move on the typical track - traumatic childhood turns the main protagonist into a criminal and by the end, he becomes a good man. We find that Lucky remains a con-man till the end of the movie and there is no transformation on the cards. At the same time, 'Oye Lucky! Lucky Oye!' does not try to justify the illicit ways of the protagonist.
'Oye Lucky! Lucky Oye!' is a movie that draws more on its detailed characters rather than the storyline. The screenplay, though it branches into several sub-plots, is convincing as well as entertaining. However, a few aspects, such as the double crossing episode, were quite far-fetched. Another aspect where the movie scores is the detailed depiction of Lucky's stealing procedure. Lucky’s teenage love story is also very amusing, while the ironical climax is something to look forward to. The hilarious dialogues only add to the fun of watching the movie.
The pace of the 'Oye Lucky! Lucky Oye!' is quite fast, leaving you with no time to think or react. However, we felt that the movie could have done with the repetitive robbery cycle in the second half. As for the performances, Abhay Deol takes the cake. He is the best of the lot and plays the role with such an élan that 'Lucky the con-man' looks totally convincing. Paresh Rawal is another character worth mentioning, along with Manjot Singh (the young Lucky). As for Neetu Chandra, she seemed to display a lot of potential. All in all, a movie worth spending money!

Oye Lucky! Lucky Oye! Pre-release Review
The season of comedies is here to stay! The latest in the string of comedy movies is 'Oye Lucky! Lucky Oye!', directed by Dibakar Banerjee and produced by Ronnie Screwvala. It will be released under the banner of 'UTV Motion Pictures', on 28th November 2008. While there is a single music director for the film - Sneha Khanwalkar, the lyricists include Dibakar Banerjee, Manu Rishi, Kanu Behl, Mange Ram and Amitosh Nagpal. Its star cast includes Paresh Rawal, Manu Rishi, Richa Chadda, Anurag Arora, Rajinder Sethi, Abhay Deol, Neetu Chandra, Archana Puran Singh and Manjyot Singh.
The story of 'Oye Lucky! Lucky Oye!' revolves around the life of Lucky, a clumsy, 15-year-old Sikh boy. He belongs to a middle-class family and lives in the poorer area of West Delhi. Lucky has an estranged family, with a father than is more interested in bullying him and beating him, than showing some affection. The disturbed childhood makes him a keen observer of the world around him. Right from his immediate setting, which comprises of friends, dropouts, delinquents and petty criminals, to the world he wants to become a part of, made up of English-speaking kids, luxury cars and posh houses, he observes everything.
Growing up with a life that does not offer him anything, Lucky learns one thing - "if you don't have it, steal it'. He teams up with his childhood friend 'Bangali' and becomes a full-fledged thief. During this time, he comes across a man - Gogi Bhai, a man who not only buys his stolen goods, but also changes the course of his life. A flamboyant musical bandleader, he becomes Lucky's surrogate father. Within no time, Lucky becomes Gogi’s most efficient operator and it is through the latter only that he comes across new people, many of whom help shape his life and define who he becomes in future.
He meets Dolly, the hostile, cynical and intimidating star dancer of Gogi’s band. Then, there is Sonal - Dolly's younger sister who attends college and is a complete contrast of the latter - shy and quiet. Lucky also becomes involved in a tentative romance with Sonal. However, his dreams are not of settling down. He is much too independent and has a hunger that is insatiable and ambition that grows more and more with time. One day, on his crime trajectory, he becomes a victim of such a pivotal act of betrayal that leaves him scarred for life and sets him on a new course altogether.

The path that Lucky follows in his life takes him to a level, where he has turned into a flamboyant playboy. He no longer desires just money, though it is still very important in his life, rather he wants the respectability and social standing that is given to every city gentleman. He wants to be held in esteem, but without having to sacrifice his freedom - the freedom to steal what he cannot get otherwise. However, there is another side to the 'master thief' Lucky that no one knows. The Lucky who steals money, jewelry, and all other riches also robs a house of a card, a teddy bear and a framed photo of a family playing in the snow!