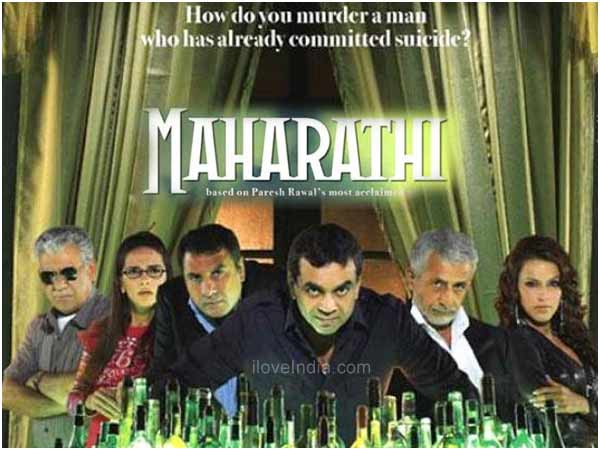 Director: Shivam Nair
Producer: Dhilin Mehta
Banner: Shri Ashtavinayak Cine Visions
Star Cast: Paresh Rawal, Neha Dhupia, Naseeruddin Shah, Om Puri, Boman Irani, Tara Sharma, Vivek Shauq
Release Date: 5 December 2008
If you are looking for good performances and do not mind a loosely-stitched script, then 'Maharathi' is surely the thing for you. The performances take precedence over the plot, which is riddled with faults. The movie has been based on a Gujarati play, but the adaptation is flawed. Though the basic concept is very interesting, the director failed to convert it into a convincing screenplay. Glitches are so many that, after a while, you lose the count.
The movie opens well and the narrative builds effectively in the initial stages. However, as you move further, things start looking unpersuasive. Especially the scenes preceding the climax are full of confusion. One area where 'Maharathi' scores brilliantly is the dialogue-writing. Especially Paresh Rawal's dialogues have been crafted in a way that gives him enough scope for displaying his comic timing. The absence of song & dance routine is another plus.
Performance-wise, you will not have a chance to complain. In fact, had it not been for the outstanding performances, the movie would have bombed badly. Naseeruddin Shah is effective in his short role, while Om Puri plays his part well. Neha Dhupia has been coming up decent performances for quite some time and 'Mahaarthi' is no exception. Boman Irani is brilliant, but we wish Tara Sharma gets a dubbing artist soon. As for Paresh Rawal, he gets the maximum footage and manages to convince you in each and every scene!
Maharathi Pre-release Review
Paresh Rawal is back in action! This time, he is playing the role of a con man in the upcoming movie 'Maharathi'. Giving him company are actors Paresh Rawal, Neha Dhupia, Naseeruddin Shah, Om Puri, Boman Irani, Tara Sharma and Vivek Shauq. Directed by Shivam Nair, the film 'Maharathi' falls under the genre of thriller/ suspense. It has been produced by Dhilin Mehta and will be released under the banner of 'Shri Ashtavinayak Cine Visions', on the first Friday of December i.e. 5th December 2008.
'Maharathi' is the story of Subhash (Paresh Rawal), a middle-age man who has been trying to make a debut in the Film Industry, for the past 10 years. Unsuccessful in getting acting parts, he makes a living by conducting small-time cons. His uncanny ability to think on his feet and the horde of unsuspecting victims that come his way make life easier. One day, putting his own life at risk, he saves a man from the jaws of death. The man is none other than millionaire Mr. Adenwalla (Nasserudin Shah), who is also helped home by Subhash.
The rich and affluent Adenwalla, out of gratitude, hires Subhash as his driver. He also has a wife, Mallika Adenwalla (Neha Dhupia). Mallika resents Subhash's proximity to her husband and notices that the latter is trying to take advantage of Mr. Adenwalla. Subhash, now deeply trusted by Mr. Adenwalla, starts living in his house and over a period of time, comes to know of his wife's evil designs. Adenwalla, on the other hand, is sick of his money-hungry wife and decides to make her payback for driving him insane.
Adenwalla throws down a challenge in front of Mallika, with the aim of putting her in a catch 22 situation. Subhash senses this as an opportunity to grab a portion of Adenwalla's money and rid himself of a lifetime of poverty. He decides to join hands with Mallika and acquire all the money and property of Mr Adenwalla. Their plan includes getting a caretaker (Tara Sharma), with the help of their family lawyer (Boman Irani). They are to serve as witnesses to the fact that the sick Mr. Adenwallas is in the house.

What follows, after Subhash and Mallika put their plan in action, is a series of situations that are thrilling to the core. Right from false alibis and double-crossings to fake kidnappings and hidden agendas, there is nothing that doesn't form a part of the story. However, executing the plan doesn't turn out to be as easy as making it was. Things get twisted and ACP Gokhale (Om Puri) and Inspector Borkar (Vivek Shauq) come into the picture. How Subhash manages to get out of this mess, innocent as ever, is what forms the rest of the story.