Ghajini, the latest Aamir Khan film, is the adaptation of a Tamil movie, of the same name. Check out the star cast & music review of Hindi film 'Ghajini'. 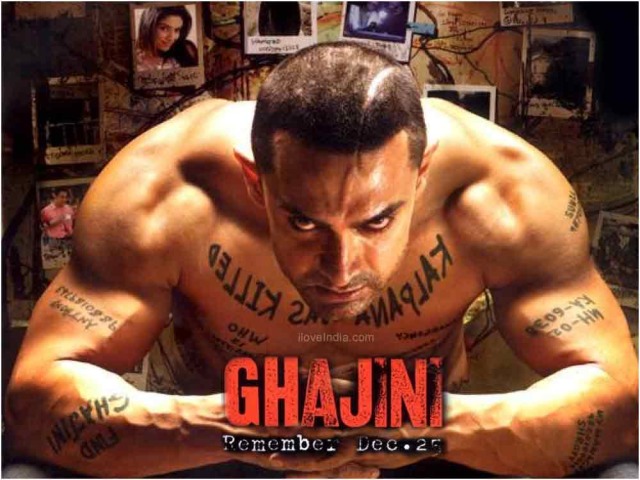 
Brilliant! This is the first word that comes to mind when one comes out of the theater, after watching 'Ghajini'. While most of the people were skeptical whether the Hindi version of the movie will match the success of the original, Tamil, one or not, Aamir Khan and A.R. Murugadoss proved all of them wrong. 'Ghajini' is a powerful film, fully capable of sweeping you off your feet. Its USP, which makes it click with the audience, includes the outstanding performance by Aamir Khan and the excellent direction by A.R. Murugadoss.
'Ghajini' grips you right from the start and keeps you hooked on till the last minute. The screenplay is so convincing that you wouldn't even come to know when it is the time for interval. Though the movie is a bit long, by today's standards, not even once do you feel its length. 'Ghajini' has the age-old concept of revenge as the basis of its story, but it has been executed with such a difference that you will find it almost impossible to find a similarity. 'Ghajini' has violence in aplenty, but none of the brutal acts has been left unjustified.
Unlike what people believe, 'Ghajini' is not 'Memento'. Though there are similarities between the two movies, they are so minor that you will not consider the former as even 'inspired' from the latter. The climax, totally different from that of the original movie, though catches you unaware, is surely brilliant. 'Ghajini' starts in the past and thereafter, keeps alternating between the 'has been' and 'now happening'. It takes you on an emotional whirlwind - feeling extremely emotional at one moment and touching the heights of thrill at the other.
'Ghajini' can be considered as the best performance of Aamir Khan till date. He is 'exceptionally good'. He has not more than a few dialogues in the film. However, it is his body language, most precisely his facial expressions, that conveys everything to the audience. While watching the movie, you don't even feel like blinking at times, for the fear of missing even a single expression of Aamir. Asin is good and Pradeep Rawat, as the menacing villain, totally convincing. Right from the screenplay to the performances to the direction, 'Ghajini' has been executed to perfection!

Ghajini Pre-release Review
Aamir Khan's much awaited movie - 'Ghajini' finally has its promos coming on air. Based on a Tamil film, of the same name, it has been produced by Allu Arvind, Madhu Varma and Madhu Mantena. The director of the film is AR Murugadoss, who directed the original Tamil version as well. It will be released on 25th December 2008, under the banner of 'Geetha Arts'. The music director of 'Ghajini' is AR Rahman, while Prasoon Joshi has provided the lyrics. Its star cast includes Aamir Khan, Jiah Khan, Mohit Ahlawat, Riyaz Khan & Asin Thottumkal.

The story of 'Ghajini' revolves around the life of Sanjay Ramasamy (Aamir Khan), a rich tycoon who falls in love with Kalpana (Asin Thottumkal), a model cum activist. One day, Kalpana comes to know of Lakshman's (Mohit Ahlawat) plan to kidnap 25 young girls and send them to Kolkata (Calcutta). She tries to come in the way of the child racketeer and ends up being killed. Sanjay tries to save Kalpana and, in the process, gets hit on his head by a metal pole. The severe head injury results in a short term memory loss.
Now, Sanjay remembers all those incidents that happened before the injury. However, his memory after the injury gets limited to 15 minutes only. After that, he forgets whatever happened in his life. The only way that he can remember, rather recall, the incidents is by tattooing notes on himself and taking instant pictures of things. The former makes Sanjay look like a dangerous figure, but lets him remind himself of the incidents that have happened in his life. He starts the hunt for the murderer of his girlfriend Kalpana.
While trying to find Kalpana's killer, Sanjay gets involved in a series of murders and is on the hit list of police, especially a particular police officer (Riyaz Khan). This police officer finds the diary of Sanjay, through which his story is unraveled and brought to light. Sanjay's story also comes in the notice of Chitra (Jiah Khan), a medical college student who is looking for a patient with an "interesting" record, for her college project. Touched by Sanjay's love story, she helps him take revenge from Kalpana's murderer. Will Sanjay accomplish his mission or will he be arrested much before? What will happen to Chitra?