Gumnaam is a thriller movie that promises to hook its audience with a series of twists and turns. Read on the review to explore the star cast & music of the film. 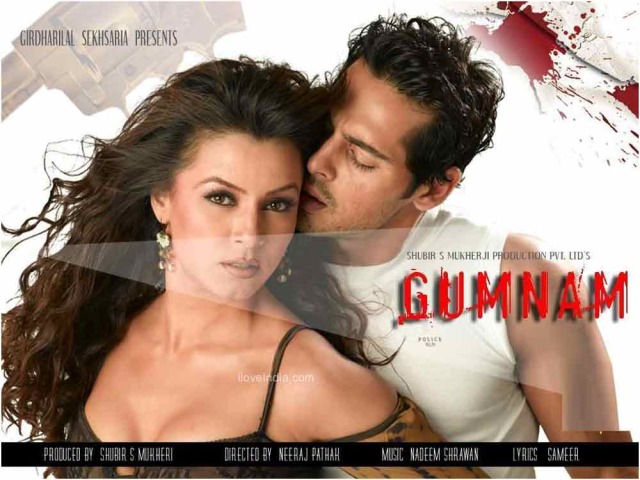 Director: Neeraj Pathak
Producer: Shubir Mukherji
Banner: Shubir S. Mukherji Production Pvt Ltd
Music Director: Nadeem-Shravan
Lyricist: Sameer
Star Cast: Dino Morea, Mahima Choudhary, Govind Namdeo, Qamar Narvi, Razzak Khan, Aryan Vaid, Suman Ranganathan, Irfaan Khan, Madan Jain
Release Date: 5th December 2008
Gumnaam Pre-release Review
Gumnaam, a suspense-thriller, is all set to hit the silver screen on December 5, 2008. The movie, going to be released under the banner of Shubir S. Mukherji Production Pvt Ltd, is written and directed by Neeraj Pathak and produced by Shubir Mukherji. Sameer has provided the lyrics for the songs composed by Nadeem-Shravan. The lead roles are played by Dino Morea, Suman Ranganathan, Mahima Choudhary and Razzak Khan. The lead characters are supported by Govind Namdeo, Qamar Narvi, Aryan Vaid, Irfaan Khan and Madan Jain.
The story of Gumnam is about Ria (Mahima Chaudhary), a model/actor performing in music videos, who aspires to make it big in films and wants to act in the lead role. She comes across Dev (Dino Morea), a professional stuntman, during one of her shoots. He rescues her from an accident on the sets and saves her life. Ria is so impressed by Dev that she begins to have feeling for him. Eventually, they fall in love with each other.
In the mean time, Ria is offered the role of a lead actress in a film, whose casting director is Rishi Gandhi (Madan). He sets a condition that she would have to leave for Shimla immediately after accepting the offer. With the best wishes of her lover Dev, she undertakes the journey to Shimla, where she is introduced to the director of the film - Muni Gandhi (Govind Namdeo). He is totally mesmerized by her beauty and even appreciates his assistant for choosing her as the heroine for his film. She is asked to give a screen test. However, she is refused for a second attempt, when she feels that she hasn’t performed very well in the first.

A twist in the tale occurs, when Rishi Gandhi passes on the cassette of her screen test to Remon (Suman Ranganathan), a wealthy woman residing at a huge mansion in Shimla. Introduction of the new character at this point of time seems to be very mysterious. Ria slowly gets some intuitions that some unusual mystery is surrounding her. Who is this woman? Why was the cassette delivered to her? What happens after the screen test? How will Ria handle the mysterious situations? To know whether these questions are answered or left unsolved, watch the thriller Gumnaam.