Rishikesh is the place where you see nature as well as devotion, at their very best. With this article, get information on the various tourist attractions i.e. places to see in Rishikesh.

Rishikesh, the very name conjures up images of resonating bells, holy dips, soaring hills and gushing river Ganges in the mind of an individual. Situated on the banks of the holy Ganga River, the town is regarded as the Gateway to the Char Dhams (four major Hindu pilgrimages) - Badrinath, Kedarnath, Gangotri and Yamunotri. It is believed to be the place where meditation can help one attain moksha (salvation). Apart from pilgrims, the town is thronged by adventure aficionados and nature lovers, who come entranced by the challenging streams and towering peaks that form it landscape. In short, Rishikesh is the place where nature and divinity have fused together to create a mysticism that can hardly be seen anywhere else. 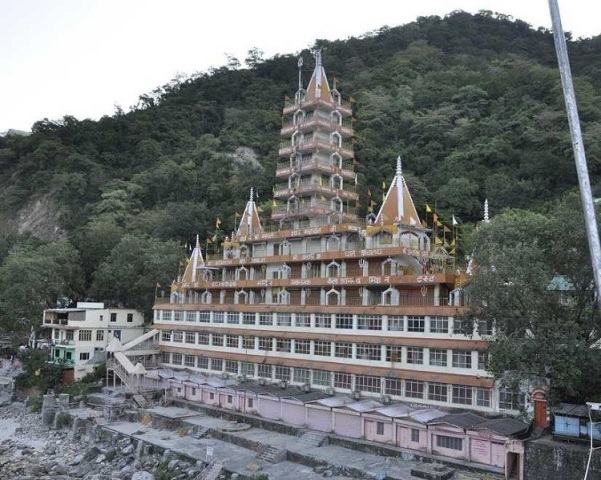 Image: [email protected]
Places to See in Rishikesh
Lakshman Jhula
Lakshman Jhula is a hanging bridge, built on the river Ganges, which forms one of the major tourist attractions of Rishikesh. As per legends, the bridge was initially a rickety, jute one that was used by Lakshman, Lord Rama’s brother, to cross the river. The bridge, in its present iron form, was built in the year 1939. Standing on the Lakshman Jhula, you can have some of the most mesmerizing views of the Ganges.
Ram Jhula
Ram Jhula is another bridge in Rishikesh, made of iron, which looks quite similar in appearance to the Lakshman Jhula. It is also known by the name of Shivanand Jhula and has been constructed to pave way between Shivanand Ashram and Swarg Ashram.
Gita Bhavan
Gita Bhavan is the name given to a building situated just by the side of the Lakshman Jhula. Constructed a few years back only, the bhavan is famous for housing magnificent statues and paintings, of the various characters in Hindu mythology.
Rishikund
Rishikund is a tank in Rishikesh, considered to be scared by the pilgrims. As per the legends, Goddess Yamuna filled this tank with water, after being pleased with Kubz, a saint.
Bharat Mandir
Bharat Mandir, contrary to what the name suggests, is not dedicated to Lord Rama’s brother Bharat. Rather, it enshrines an idol of Lord Vishnu, which is said to be carved out of a single 'Salagram'. The temple was constructed by Adiguru Shankracharya, in 12th century. Located on the bank of the holy Ganges, the shrine is counted amongst the oldest temples in Rishikesh
Swarga Ashram
Swarga Ashram is a huge complex in Rishikesh, popular for housing several temples within its precincts. Throughout the complex, you can see magnificent statues of various Gods and Goddess. The ashram also comprises of a number of eating joints, apart from souvenir and other shops.
Nilkanth Mahadeo
Situated on the outskirts of Rishikesh, around 12 km away, is a revered temple, known as ‘Nilkanth Mahadeo’. Perched on top of a hill, at a height of around 1675 m, the temple is dedicated to Lord Shiva. Legends say that the venom that oozed out while the ‘Samudra Manthan’ was ingested by Lord Shiva at the place which is now known as the Nilkanth Mahadeo.
Triveni Ghat
Triveni Ghat, as the name suggests, is a bathing ghat in Rishikesh. It serves as the venue of a Maha Arti every day. Early in the morning as well as late in the evening, you will find pilgrims taking a dip in the holy waters of the ghat.
White Water Rafting
Apart from pilgrims, adventure enthusiasts form the largest group of visitors to Rishikesh. Serving as a major attraction for them are the violent rivers passing around the town. These aggressive streams present the perfect opportunity for them, to go rafting down the waters. The breathtaking scenery that surrounds the rivers only adds to their attraction.
Accommodation
Rishikesh is the perfect destination for the nature lovers, adventure tourists as well as pilgrims. Seeking to serve the accommodation needs of the tourists, many hotels and resorts have been opened here. The spa resorts of the town promise to make you feel completely relaxed as well as rejuvenated. There are also a number of hotels in Rishikesh, right from the five-star ones to the budget ones. Amongst these, the more popular ones are Ananda Spa Resort, Ganga Beach Resort, Himalayan Hideaway, Vasundhara Palace, Hotel Green View, etc. If you want to spend your days amidst nature’s splendor, a reservation at the luxury tents of Rishikesh will be your best bet.
How to Reach
By Air
Jolly Grant Airport, of Dehradun, is the nearest air link from Rishikesh. It is around 35 km from the holy town.
By Rail
Haridwar railway station, situated at a distance of approximately 24 km from Rishikesh, will be the nearest railhead.
By Road
Rishikesh is well connected with all the major neighboring cities by road. You can easily get buses and taxis for reaching there from the nearby cities.
How to Cite