Dharamsala boasts of a large number of Buddhist monasteries that form its tourist attractions. Read on to know more about the places to see in Dharamshala.

Set amidst luxuriant greenery, snow-capped peaks and cascading waterfalls, Dharamsala forms one of the most popular hill stations of India. Situated at the foothills of the Dhauladhar ranges, the hill resort promises you mesmerizing views of the steep valleys, deodar forests and pine-covered hills. It stands divided into two parts, Upper Dharamshala or McLeod Ganj and Lower Dharamshala - the commercial centre. Being the seat of exiled leader, His Holiness the Dalai Lama, Dharamshala also serves as home to a number of Tibetan settlements. Thus, you can find a large number of monasteries here, echoing with the sound of bells, which form one of its most popular tourist attractions. If peace, solitude and tranquility are what you are looking for, then a visit to Dharamsala will be your best bet! 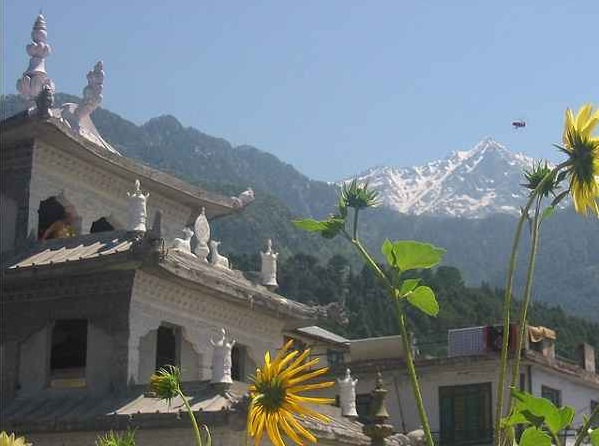 Image: [email protected]
Places to See in Dharamsala
Namgyal Monastery
If you are in Dharamsala, visiting Namgyal Monastery is something that you cannot afford to miss. Serving as the residence of His Holiness the Dalai Lama since his exile, this monastery forms a very important destination for Buddhist pilgrims coming to India. Situated in the Center of Tibetan Studies, it forms one of the first places visited by tourists coming here.
McLeodganj
McLeodganj or Upper Dharamshala serves as the seat of His Holiness the Dalai Lama. After his exile from Tibet, He came to the place along with many of his followers. With time, several monasteries and Tibetan schools came up at McLeodganj and today, it is often referred to as the 'Little Lhasa of India'. Being separated from the more-commercial ‘lower Dharamshala’ McLeodganj is much more tranquil and offers tourists the perfect option of a spiritual sojourn.
Church of St. John In The Wilderness
Church of St. John In The Wilderness is an Anglican church that is located in the forest near Forsyth Gunj. Hardly 15 minutes walk from McLeodganj will take you to this church, which had its foundation laid down by the then British Viceroy, Lord Elgin, in the year 1852. Constructed as per Neo-Gothic architectural style, St. John is known for its peaceful environs and Belgian stained glass windows.
Tsuglagkhang
Tsuglagkhang is a shrine situated right opposite Namgyal Monastery, the residence of Dalai Lama. It forms the central cathedral or the main temple of the Buddhists and is known for housing three-meter high, gilded bronze image of Sakyamuni Buddha. Apart from that, it also boasts of impressive images of Avalokitesvara and Padmasambhava.
Norbulingka Institute
For those who are interested in exploring culture of Tibet, a visit to Norbulingka Institute is a must. As far as study of Tibetan arts and culture is concerned, it is counted amongst the leading institutes in the world. The institute was established in the year 1754 and houses 3 academies, namely 'The Centre for Arts', 'The Academy of Tibetan Culture' and 'The Literary and Cultural Centre'.
Triund
In case you are looking for some adventure, Triund is just the perfect destination. It can be reached after an enthralling 9 km trek from McLeodganj, which will take you across the quaint villages of Rakkar and Dharamkot. The jungles of rhododendrons and oaks that you pass on the way will help you explore the wildlife of the region, comprising of wild goats, black bear and pigs. Don’t forget to visit Galu Devi temple, which falls on the way.
Dip Thekchen Choeling Monastery
Dip Thekchen Choeling Monastery is situated amidst towering pine trees and is the best place to know about Buddhist faith. It stands adorned with a golden roof, visible even from a considerable distance. The first floor of the monastery houses a museum, exhibiting bronze figures, Buddhist images and mandalas. There is also a library here, with collection of ancient manuscripts, books on Buddhist philosophy, prayer scrolls, etc.
Dal Lake
If you are looking for a picnic spot in or around Dharamshala, Dal Lake is just the place for you. It is around 11 km from lower Dharamshala and 3 km from upper Dharamshala and forms the starting point of trekking in the region. An artificial lake, it is oval in shape and stands encircled by fir trees. Every year, in September, it plays host to a fair.
Chamunda Devi
A must-visit excursion from Dharamshala is the Chamunda Devi temple. It is dedicated to Goddess Durga, also called 'Chamunda', and forms one of the nine temples where the body parts of Sati, Lord Shiva’s consort, fell. Apart from being a revered destination, the temple is also known for its exquisite natural environs. The surrounding forests & the river flowing just behind it add to the experience.
Accommodation
Dharamsala is visited by a large number of tourists every year, especially Buddhist pilgrims, and there are a number of hotels in Dharamshala to cater to their needs. The heritage hotels in the hill station, like Cloud End Villa and Hari Kothi, provide you the perfect combination of royalty and luxury. Though Dharamsala does not have 5-star hotels, its 3-star ones, like Jukaso Palace, Hotel Anand Palace and Hotel Him Queen, promise to make your stay as comfortable as possible. Those looking for economical accommodation should check out the budget hotels like Anupam Resort, Glenmoor Cottages and Jukaso Palace.
How to Reach Dharamsala
By Air
Gaggal airport, located 15 km away, falls the nearest from Dharamshala. A small airport, it is serviced by a few airlines only.
By Rail
There is a narrow gauge railway line passing through Kangra, which is 17 km from Dharamshala. The nearest broad gauge railhead is formed by Pathankot, 95 km away.
By Road
Dharamsala has a good network of roads, connecting it with the rest of India. You will easy find buses as well as taxis for reaching here.
How to Cite