Lonavala is a picturesque hill station in Maharashtra, which has numerous tourist attractions to boast of. Explore the places to see in Lonavla, India.

Lonavala - one of the most striking hill stations in Maharashtra! It lies nestled amidst the Sahayadri ranges of the state, at an altitude of 625 m. Being situated at a distance of only 96 km from Mumbai - the Bollywood City of India; Lonavala is counted amongst one of its most popular excursions. Apart from picturesque beauty, comprising of blooming greens, sharp valleys, mesmerizing sunsets and breathtaking views, the hill station is known for the host of adventure sports options it offers, especially its interesting trekking trails. The best time to visit Lonavla is between October and May, when the weather conditions are at their best and the entire station is enveloped by a carpet of velvet greenery. 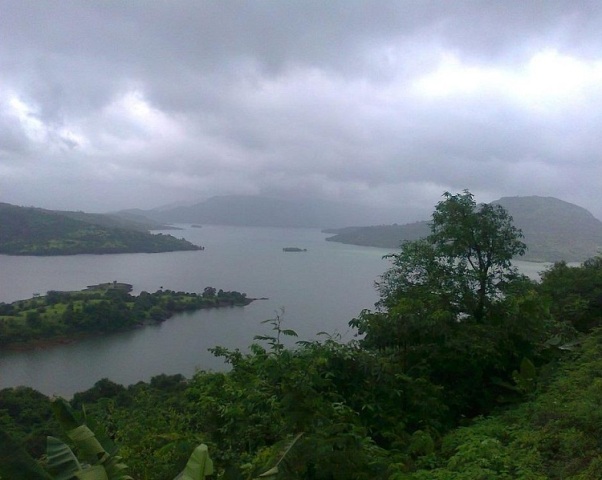 Image: By Abhijeet Safai (Own work) [CC-BY-SA-3.0 (http://creativecommons.org/licenses/by-sa/3.0)], via Wikimedia Commons
Places to See in Lonavala
There are many tourist attractions in Lonavala to arouse as well as withhold the interest of the tourists. In the following lines, we have mentioned some of the most famous places of interest in Lonavla:
Lonavala Lake
Situated on the outskirts of Lonavala, this lake is the perfect place to relax after a hard day at work. The tranquil surroundings and serene atmosphere offered by the Lonavla Lake are enough to lure tourists here. The lake is also visited by a number of birds, making it a bird watcher’s delight.
Tungarli Lake
Tungarli Lake makes a very popular picnic spot for the residents of Lonavala, Khandala and the neighboring cities. Children especially love to come to the lake and play around, oblivious to the tensions surrounding their world. Apart from being a splendid creation of nature, this lake is also a very important source of water for the people of the hill station.
Rajmachi Point
As you move towards the outskirts of Lonavala, one of the few places that will occupy your interest is the Rajmachi Point. It falls on the way from Mumbai to Lonavla, just before the starting point of the Ghat. Situated in the valley below the spot is the Rajmachi Fort and one can have magnificent views of this fort from Rajmachi Point. Further adding to the attraction of Rajmachi Point is Vaghjai Dari, located nearby.
Valvan Dam
Hardly 2 km away from the heart of Lonavala, one finds the spectacular Valvan Dam. Located at the foot of the dam is a blooming garden, adorned with a wide variety of colorful flowers and other plants. The Khopoli power station sources a major portion of its water from this dam.
Ryewood Park and Shivaji Udyan
Adding to the lush green surroundings of Lonavala are Ryewood Park and Shivaji Udyan. The stunning gardens are amongst the favorite picnic spots of the children, owing to the soaring trees and spacious open spaces provided by them. The swings set up at the parks further add to their appeal. An ancient Shiva Temple, situated inside one of the parks, is visited by a large number of people every day.
Karla Caves
Counted amongst the excursions of Lonavala, Karla Caves have been found to be of Buddhist origin. These caves are believed to have been built as far back as 200 BC. A huge Buddhist stupa, said to be more than 2200 years old, is one of the major draws of the caves.
Places to Stay in Lonavala
Lonavala, being a very popular hill station, boasts of a number of hotels that provide accommodation to its visitors. The variety of hotels in Lonavala is very wide. You can get five-star, four-star, three-star as well as budget hotels in Lonavala. Thus, whatever, be your need and budget, you will not find dearth of accommodation options in the scenic hill station of Lonavala.
How to Reach Lonavala
By Air
Lohegaon Airport of Pune falls the nearest to Lonavala. Apart from domestic airlines, it is also serviced by a few international carriers. The nearest international airport is at Mumbai.
By Rail
Lonavala hill station has its own railway station, which falls on the main railway line between Mumbai and Pune. All the express trains going from Pune to Mumbai, and vice-versa, pass through Lonavala.
By Road
Lonavla is situated at a distance of only 62 km from Pune and 96 km from Mumbai. You can easily get buses as well as taxis for reaching Lonavala from the neighboring cities.
How to Cite