Find out the tourist destinations/places to see in Indore city of Madhya Pradesh, India.

Indore - the biggest city in Madhya Pradesh lures tourist from far and wide. Situated almost at the heart of India, the city is renowned throughout for its architectural beauty. Right from the historical monument to religious shrines, the structures here boast of immense splendor. Most of these wonders belong to the time of the Holkar dynasty and bear a testimony to the adroitness of the artisans of those times. Even the shopaholics won’t go back from Indore, known for its glass bangles and jewelry, disappointed. The market places in the city offer exquisite gold and silver work, clothes, leather work, etc. In this article, we have provided information on the major tourist attractions of Indore. 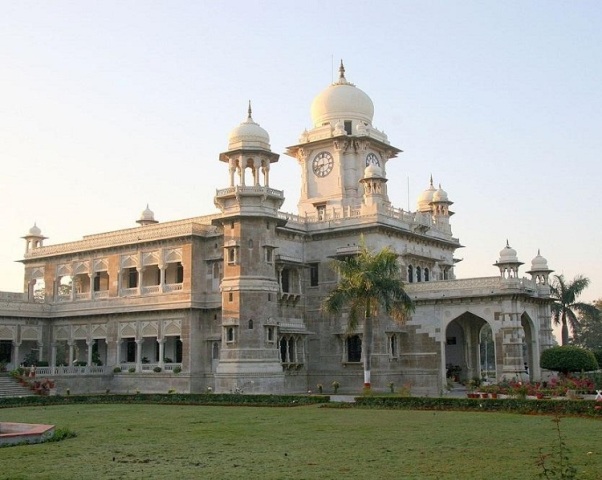 Image: By http://www.flickr.com/photos/anuragyagnik/ [CC-BY-SA-2.0 (http://creativecommons.org/licenses/by-sa/2.0)], via Wikimedia Commons
Places to See in Indore
Rajwada
The tourists who come to enjoy their holidays in Indore make sure to schedule a trip to the Rajwada, also known as the Old Palace. The architectural brilliance seen here is a blend of French, Mughal and Maratha styles. A seven storied structure, the palace is made up of wood and stone and was once the center of trading activities in the city. The beautiful gardens that form a part of its complex boast of fountains, an artificial waterfall and brilliant pieces of sculptures.
Lal Baag Palace
Situated on the outskirts of Indore, Lal Baag Palace is a three storied edifice built by Maharaja Shivaji Rao Holkar. It was completed in 1921 and boasts of a very unique and impressive style of architecture. Italian marble columns, grand chandeliers, rich Persian carpets, Belgium stained glass windows, Greek mythological reliefs and Italian style frescoes make the palace truly worth seeing.
Kanch Mandir
Kanch Mandir, or the Glass Temple, was built by Sir Hukamchand Seth in the early 20th century. Thousands of mirrors, with patterned ceramic tiles, adorn the interiors of this Jain temple. The magnificent lantern-type glass lamps and cut glass chandeliers, combined with 50 murals and exquisite paintings, which ornament the temple, make it one of the must-visit places in Indore.
Chattri Bagh
Chattri Bagh of Indore comprises of the cenotaphs built in the memory of the Holkar rulers. Constructed as dome type structures, with pyramidal spires on top, these memorial canopies have been built on the same site where the Holkar rulers were cremated. A prayer hall, with skillfully carved arches and pillars, and statues of the cremated rulers add to the attraction of Chattri Bagh.
Bada Ganapati Temple
Bada Ganapati Temple is a very beautiful as well as revered shrine, which was constructed in the year 1875. It claims the distinction of housing the largest Lord Ganesha statue in the world. Having a height of 8 m, the statue stands adorned with metallic frames of gold, silver, copper, brass, and iron.
Other Tourist Attractions
Other places that are worth visiting in Indore are Central Museum, Choki Dhani, Mahatma Gandhi Hall (Town Hall) and Nehru Park.

Places to Stay
As far as accommodation is concerned, there are a number of hotels in Indore that serve the needs of the travelers. Even from the point of view of budget, tourists will find no dearth of hotels in the city. Right from five star hotels to budget hotels to bread and breakfast hotels, Indore offers all types of accommodations to its visitors.

How to Reach Indore
By Air
Indore airport is linked to almost all the key cities in the country, like Delhi and Mumbai, through direct and regular flights.
By Rail
There is a railway station at Indore, which keeps the city connected with all the major parts of India.
By Road
There is a good network of roads linking Indore with the rest of the country. You will easily get buses as well as taxis for commuting to Indore from the other cities in Madhya Pradesh as well as the neighboring states.
How to Cite