Bodh Gaya in the state of Bihar in India is the place where Gautam Buddha attained enlightenment. Read to know more about Bodhgaya.

Bodhgaya or Bodh Gaya is located in the Gaya district of Bihar, India. This place is world famous because it was here that spiritual teacher Gautam Buddha, who was the founder of Buddhism, attained enlightenment. For Buddhists all over the world, Bodh Gaya is among the principal four pilgrimage sites associated with the life and times of Gautam Buddha. The other three holy Buddhist sites are Kushinagar, Lumbini and Sarnath. The ancient famous Mahabodhi Temple situated here was declared a UNESCO World Heritage Site in 2002. 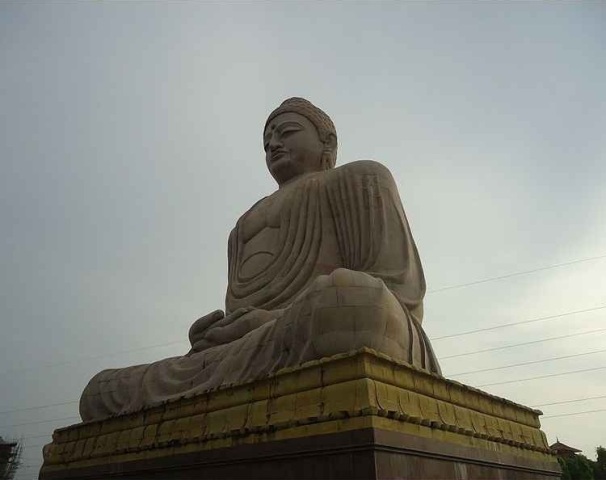 Image: By Rao'djunior (Own work) [CC-BY-SA-3.0 (http://creativecommons.org/licenses/by-sa/3.0)], via Wikimedia Commons
Gautam Buddha’s Association with Bodhgaya
As per Buddhist scriptures, Prince Gautama Siddhartha (Buddha) after relinquishing everything reached the sylvan banks of Falgu river near Gaya in around 500 BC. Here he sat down in meditation under a Bodhi tree and it was after three days and three nights that Gautama Buddha attained enlightenment and in the process, the answers to the questions he had been searching for years. Thereafter, Buddha proceeded towards Sarnath where he began preaching the tenets of Buddhism. There are numerous well-documented stories pertaining the time Buddha spent in and around Bodhgaya.
Places to See in Bodhgaya
There are many places in Bodhgaya associated with the life and times of Gautama Buddha. While all of them are major holy sites for Buddhists, here’s a brief info about few important ones here:
The Mahabodhi Temple
The Mahabodhi Temple at Bodhgaya is where Siddhartha Gautama (Gautama Buddha) is said to have attained his enlightenment. The great temple is built of brick and is among the oldest brick structures to have survived in eastern India. Within the Mahabodhi Temple precincts, on its western side to be precise, stands the holy Bodhi tree. The place is about 60 miles away from Patna, the capital city of Bihar state in India.
Bodhi Tree at Bodhgaya
The Bodhi or the Pippal tree (ficus religiosa) located near the Mahabodhi temple in Bodhgaya is the exact place where Buddha is said to have attained enlightenment. The present Bodhi tree there is the fourth or fifth generation offspring of the original tree from Buddha’s times. It’s huge and magnificent-looking spread over a large area. The earlier trees is said to have been uprooted few times, but were planted back out of reverence using the sapling from the old tree.
Jewel Walk
As per the Buddhist records, Gautam Buddha walked to and fro lost in thoughts near the sacred Bodhi tree at Bodhgaya for seven days after attaining enlightenment. As such since the old days, this particular spot came to be regarded as sacred status by devotees. A shrine was built here in about 1st century B.C.
Animesh Lochan
This venue was built as it was here that Lord Buddha stood gazing at the holy Bodhi tree out of gratitude after he attained the supreme enlightenment in Bodh Gaya. This place too is a favorite haunt of tourists and devotees alike.
Bakraur
It’s a village in Bodh Gaya located on the bank of the river Niranjana. Bakraur is about 14-kms south of Gaya. As per Buddhist saying, Gautam Buddha during his penance was proffered Kheer (rice-pudding) here by a village maid, Sujata. There’s a mound called Sujata Kutir in this village in remembrance of the site of Sujata’s original home.
Bodhgaya Fair & Festivals
Buddha Jayanti
The Buddha Jayanti festival which falls on a full moon day in April/May every year is celebrated to commemorate the occasions of Buddha's birth anniversary as well as enlightenment.
Nyingma Monlam Chenmo
Nyingma Monlam Chenmo is held in January-February for about three weeks every year. This festival is celebrated for world peace and is generally attended by Dalai Lama (incarnation of Gautama Buddha) as well.
How to Reach Bodhgaya?
Accommodation at Bodhgaya

There are various budget hotels and rest houses offering cheap accommodation facility in Bodhgaya. Apart from this, there are also some mid-range and high-end hotels in the Bodhgaya city. The ITDC hotel, Bodhgaya Ashok is a well-known hotel in the higher category. Even a selected few monasteries provide accommodation to visiting tourists.