Tirupati Balaji Temple in India is dedicated to Sri Venkateswara. Get more information on the Tirumala Tirupathi Temple. 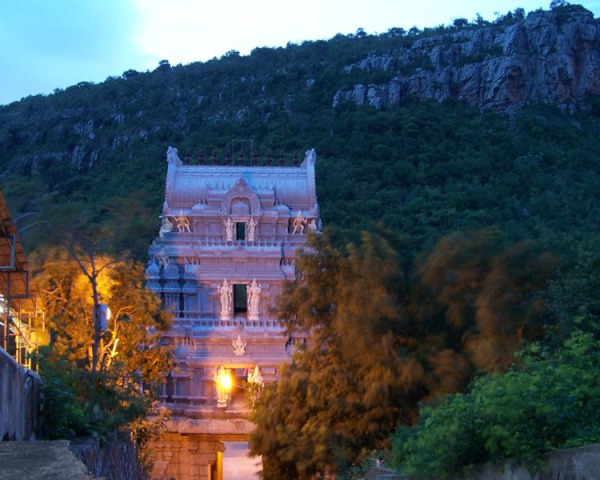 Image: By Vimalkalyan at en.wikipedia [Public domain], from Wikimedia Commons
Dedicated To: Sri Venkateswara (Lord Tirupati)
Highlights: Richest Temple in the World
Tirupati Balaji Temple, situated in the Tirupati city of Andhra Pradesh, is dedicated to Lord Tirupati Balaji, also known as Sri Venkateswara. Not only is the temple amongst the most-visited shrines in India, it is also said to be the richest temple in the whole world. It is situated on the seventh peak of the Tirupati Hill, known as Venkatachala or Ventaka Hill. The origins of the Tirumala Tirupathi Temple can be traced to the Vaishnava Sect, which comprises of the followers of Lord Vishnu. The temple is held in a high regard by Hindus and often, one can find kilometer-long queues of devotees outside its complex.
The Deity
The location of the temple, on the Tirupati Hill that has seven peaks, has resulted in the Lord being referred to as 'Lord of the Seven Hills' also. Sri Venkateswara is believed to be an incarnation of Lord Vishnu - one of the Trinity of Hindu Gods. The Lord is known as 'Venkateswara' mainly in the southern parts of India, while the devotees residing in the northern parts of India refer to Him as ‘Tirupati Balaji’. In the Hindu Shastras, Puranas, Sthala Mahatyams and Alwar hymns, it has been mentioned that in the Kali Yuga, one can attain moksha by worshipping Sri Venkateswara.
Architectural Beauty
Tirupati Balaji Temple has been built as per the Dravidian style of architecture and one can only marvel at the skills and adroitness of the artisans who were engaged in its construction. The structure of the temple has been adorned with an exquisite 'Gopuram' (tower) and gilded cupola (Vimana), which add to its architectural beauty. Inside the enclosures, one can find magnificently carved statues of the legendary figures associated with the temple, including King Krishnadevraya and Todarmal (Emperor Akbar’s Minister).
Sanctum Sanctorum
The sanctum sanctorum of the Tirumala Tirupati Temple comprises of three enclosures, also known as 'Prakarams'. In the outermost enclosure, you will find the 'Dhvajastambha' i.e. the banner post, along with the statues of Vijayanagara King Krishnadevaraya, his consorts and Todarmal. The innermost enclosure enshrines the idol of Lord Balaji. The idol is shown having the aspects of Lord Vishnu as well as Lord Shiva, the Preserver and the Destroyer, of Universe, respectively.
Accommodation
You will find no dearth of accommodation in Tirupati. Since the town receives a large number of devotees on a daily basis, numerous accommodation places have sprung up, suiting every need and budget. If you are one of those for whom price does not matter, then the luxury hotels offered by the city will be best for you. They provide world-class facilities and excellent services and are perfect for business travelers also. For the budget travelers, there are numerous budget hotels, along with the Government-run guest houses and lodges. Though the amenities are not exceptional, you will not find dearth of basic ones either.
How to Reach
By Air
The nearest airport is situated at Renigunta, which lies approximately 15 km from the main town. It has regular flights for almost all the key cities in India, like Bangalore, Chennai, etc. The nearest international airport will be the one at Chennai.
By Rail
The railway station situated at Tirupati is serviced by regular trains plying to major cities like Mumbai, Delhi, Hyderabad, etc. Other railway stations that fall near to Tirupati are those at Renigunta (15 km) and Gudur (100 km).
By Road

Tirupati boasts of a good network of roads that connects it with all the major parts of India. You will easily find regular buses to all the cities in Andhra Pradesh as well as the neighboring states. Taxis are also easily available for covering long distances.