Find about Khajuraho, one of the most popular destinations in India.

Khajuraho, a small village situated in the state of Madhya Pradesh, is known for being home to temples carved with the most erotic sculptures in entire India. One look at the temples and you will get a visual picture of the sensual pleasures enjoyed by humans. However, the images that one sees there are not at all offensive. Rather, the sensuality has been portrayed in a divine way, with the figures being those of celestial beings. The temples at Khajuraho were founded somewhere around 950 to 1050 AD, under the Chandela rulers. They claim the distinction of being one of the World Heritage Sites in India. 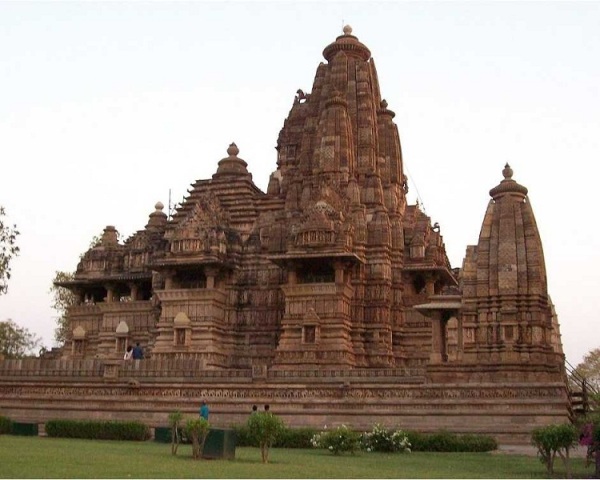 Image: By Rishav Guha (Own work) [CC-BY-SA-3.0 (http://creativecommons.org/licenses/by-sa/3.0)], via Wikimedia Commons
Travails of Time!
In the earlier times, the temples in Khajuraho numbered approximately eighty five. However, as the Chandela Empire starting losing its control, the temples also started being neglected. Time took its toll on the Khajuraho temples and led them on the path of nemesis. It was only in the 20th century that these temples were rediscovered. Huge efforts went into their renovation and after much labor; only twenty five temples could be restored. Though the beauty of the refurbished temples cannot match what it was during the time of their foundation, it never fails to mesmerize the visitors.
Architecture
The interiors of Khajuraho temples have been ornamented in a way that reflects the way of life, as it was during the reign of the Chandela Empire. Every one of the 25 temples can be divided into three parts, namely entrance (ardhamandapa), assembly hall (mandapa) and the sanctum (garbha griha). The architects who planned the temples seem to have only one theme in mind, celebration of the innumerable moods and facets of a woman. Constructed out of beautiful sandstone, these temples present an awe-inspiring sight.
Three Groups of Khajuraho Temples
The twenty five Khajuraho temples have been divided into three separate groups, on the basis of their geographical patterns.
Western Group of Temples
The Western Group of Temples in Khajuraho is the most known of the three. It is also the biggest group of temples in the village. Amongst the temples in the Western Group, the largest one is the Kandariya Mahadeo. Boasting of more than 900 statues, it has been beautifully adorned with carved entrance arch, pillars and ceilings. The huge idol of Lord Shiva, along with the Shiva Lingam and carved images of various Gods, Goddesses and apsaras (heavenly maidens) make this temple a must see.
The other major temples in the Western Group are Chaunsat Yogini (dedicated to Goddess Kali), Chitragupta Temple (dedicated to Surya, the Sun God), Vishwanath Temple (dedicated to Lord Brahma), Lakshamana Temple (dedicated to Lord Vishnu) and Matangeshwara Temple (dedicated to Lord Shiva). All these temples have been festooned with exquisitely carved images, which comprise mainly of couples and groups engaged in passionate physical activities.
Eastern Group of Temples
The Eastern Group of temples in Khajuraho comprise of both Jain temples as well as Hindu temples. Amongst the three Jain temples seen here, the grandest one is the Parsavanatha Temple. It is dedicated to Lord Parsavanath and has been decorated with sculptures showing people, engaged in the daily activities. Ghantai Temple is known for housing a spectacular fresco, illustrating the 16 dreams of Lord Mahavira's mother.
The last one of the Jain temples at Khajuraho is the Adinath Temple, which is dedicated to Lord Adinath, the first Jain Tirthankara. Three Hindu temples in the Eastern Group of Khajuraho Temples comprise of the Brahma temple, the Vamana temple and the Javari temple, dedicated to Lord Brahma and two incarnations of Lord Vishnu, respectively. All of these temples are definitely worth visiting, atleast once in a lifetime.
Southern Group of Temples
Southern Group of Temples is situated on the outskirts of the Khajuraho village, approximately 5 km away. In this group, the two most notable temples are Duladeo Temple and Chaturbhuj Temple. The first one is dedicated to Lord Shiva and has been adorned with pleasurable images of the apsaras (heavenly maidens). The second one is dedicated to Lord Vishnu and houses an elaborately carved image of the Lord.
Accommodation
Khajuraho is home to a large number of hotels, which serve the need as well as the budget of each and every traveler. Right from the five star hotels to the budget hotels, the place has it all. Every year, a large number of tourist come to witness the beauty of the Khajuraho Temples and in tune with the need of these tourists, different types of hotels have sprung up in the vicinity. The five star hotels provide the world class facilities, while the budget ones provide reasonable accommodation. Whatever be your requirements and your price range, you will not be disappointed by the hotels in Khajuraho.
How to Reach Khajuraho Temples
By Air
Khajuraho has a domestic airport of its own, making it easier to reach the temples by air. Travelers can easily get flights to almost all the major cities in India, including Delhi, Varanasi and Agra, from this airport.
By Rail
Khajuraho does not have a railway station of its own. The nearest railheads from the place will be those of Satna (120 km away) and Jhansi (175 km away). You can easily get trains for almost all the parts of India, from these two stations.
By Road
There is a good network of roads connecting Khajuraho with the rest of the India. One can easily get buses as well as taxis from the place, to almost all the cities in Madhya Pradesh as well as the neighboring states.
How to Cite