Jennifer Aniston is best known for her role of ‘Rachel Green’, in the sitcom ‘Friends’. Read this biography and know more about the childhood and profile of Jennifer Aniston. 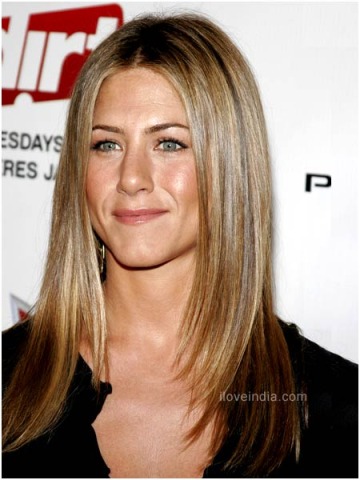 Born in: Sherman Oaks, Los Angeles, California
Nationality: American
Career: Actor, Director
Jennifer Aniston is an American actress, known for starring in both films as well as television series. Till date, she is most famous for playing the role of Rachel Green in the sitcom ‘Friends’. Apart from that, she has received wide scale coverage in the press, following her marriage as well as her breakup with actor Brad Pitt. Jennifer Aniston has appeared in a number of Hollywood films, like ‘Bruce Almighty’, ‘Office Space’, ‘Along Came Polly’, ‘Derailed’, ‘The Break-Up’ and ‘Rumor Has It’.
Childhood and Early Life
Jennifer Aniston was born on 11th February 1969, in Sherman Oaks, Los Angeles, California. She is the daughter of the actor John Aniston and actress Nancy Dow. Her father is a Greek American, born on the island of Crete (Greece), while her mother is from the New York City itself. Aniston has two half-brothers, John Melick (older) and Alex Aniston (younger). She lived in Greece for only one year, as a child, and later, her family moved to the New York City, where she spent the rest of her childhood.
The late actor Telly Savalas, who was also her father's best friend, was Aniston’s godfather. As a child, she went to New York Rudolf Steiner School and finally graduated from Manhattan's Fiorello H. LaGuardia High School of Music & Art and Performing Arts. Thereafter, she started working in Off Broadway productions, like ‘For Dear Life’ and ‘Dancing on Checker's Grave’. All this while, she supported herself by doing several part-time jobs, including that of a telemarketer and a bike messenger. In 1989, she moved to Los Angeles.
Career
Aniston bagged her first television role in the year 1990, in the short-lived series ‘Molloy’. The same year, she starred in the TV movie, ‘Camp Cucamonga’. She also co-starred in ‘Ferris Bueller’, a television adaptation of the 1986 hit movie ‘Ferris Bueller's Day Off’. However, due to some reason, the series was quickly canceled. Thereafter, Aniston appeared in two comedy shows, ‘The Edge’ and ‘Muddling Through’, apart from doing a guest appearance in ‘Quantum Leap’, ‘Herman's Head’ and ‘Burke's Law’.
None of the shows were successful. In fact, her first movie ‘Leprechaun’ (1992) was also a major failure. Faced with so many flops, Aniston considered giving up acting altogether. Just before she was about to take that step, she auditioned for ‘Friends’, for the role of Rachel Green. She bagged the role and played the character, right from 1994 till 2004, when the show ended. Not only was the show hugely successful, but also bagged major audience recognition for Aniston as well as her co-stars.
So popular was the character of Aniston that for the last two seasons of Friends, she was paid one million dollars per episode. Apart from that, she also won five Emmy nominations, including one award for "Outstanding Lead Actress in a Comedy Series". As per the Guinness World Book of Records (2005), for the tenth season of Friends, Aniston (along with her female costars) became the highest paid TV actress of all time. Apart from being involved in Friends, she was seen in a promotional advertisement for Microsoft’s Windows 95 (1994).
She was also seen in a number of Hollywood movies, while working for Friends. From mid to end-1990s, she was seen in ‘She's the One’ (1995), ‘Dream for an Insomniac’ (1995), ‘Picture Perfect’ (1997), 'Til There was You’ (1997), ‘The Object of My Affection’ (1998), ‘The Iron Giant’ (1999-voice only) and ‘Office Space’ (1999). Aniston started the 21st century with ‘Rock Star’ (2001), followed by ‘The Good Girl’ (2002). However, it was in 2003 that she achieved major box office success, with ‘Bruce Almighty’.
The next year, she was seen in ‘Along Came Polly’, which also received box office success. In 2005, Aniston was seen in two major studio films, ‘Derailed’ and ‘Rumor Has It’, none of which turned out to be a success. They were followed by a low-budget drama, ‘Friends with Money’ (2006), a moderately successful film, and ‘The Break-Up’. The same year, she co-directed her first movie ‘Room 10’. In 2007, Aniston did a guest appearance in an episode of Courteney Cox Arquette's series ‘Dirt’.
Personal Life
Aniston got married to actor Brad Pitt in July 2000. Before that, she was involved with musician Adam Duritz and was also engaged to actor Tate Donovan. The rumors of problems in Aniston-Pitt marriage started when Pitt came to his ‘Oceans Twelve’ premiere without her. After rumors of reconciliation, the couple finally separated in January 2005 and got divorced in October 2005. Aniston admitted that the divorce once again made her close to her mother, with whom she was estranged for nearly a decade.
After the divorce, Aniston was linked with actor Vince Vaughn, British model Paul Sculfor and singer John Mayer (whom she is believed to be dating presently). In 2006, she was included in the annual ‘Star Salary Top 10’ of The Hollywood Reporter. Aniston was listed as ‘10th Richest Woman in the Entertainment Industry’ for 2007, by Forbes. Apart from that, Forbes also listed her as the ‘Top-selling Celebrity Face of the Entertainment Industry, in October 2007.
Filmography
1990 - Camp Cucamonga (TV movie)
1993 - Leprechaun
1996 - She's the One, Dream for an Insomniac
1997 - Picture Perfect, 'Til There was You
1998 - The Object of My Affection
1999 - The Iron Giant (voice only), Office Space
2001 - Rock Star
2002 - The Good Girl
2003 - Bruce Almighty
2004 - Along Came Polly
2005 - Rumor Has It, Derailed
2006 - The Break-Up, Friends with Money, Room 10 (co-director only)
How to Cite