T.S. Eliot is known for shaping modern literature, for which he was conferred upon with numerous honors through his lifetime. With this biography, know about the childhood and career of T.S. Eliot. 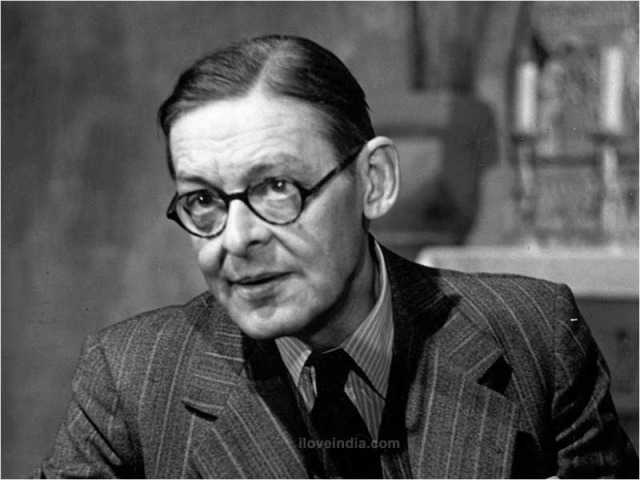 The American-English author, T.S. Eliot was one of the most significant and influential English language poets in the 20th century. Best known for authoring ‘Prufrock and Other Observations’ and ‘The Love Song of J. Alfred Prufrock’, Eliot had been honored with numerous awards, the most recommendable being the Nobel Prize for Literature in 1948. Apart from essaying the role of a poet, Eliot was an interesting playwright, editor, and publisher as well. Amongst other works, his best-known poems include ‘Gerontion’, ‘The Waste Land’, ‘The Hollow Men, ‘Ash Wednesday’, and ‘Four Quartets’. Upon his death, Eliot was paid the final tribute by many eminent poets and artists wherein he was declared as ‘A grand poet and brotherly friends’ by Ezra Pound. Read on further to know more about the life and career of T.S. Eliot.

Thomas Stearns Eliot, T.S. Eliot for short, was born in St. Louis in Missouri into a bourgeois family originally from New England. The sixth and youngest child of a distinguished family, Eliot was born to Henry Ware Eliot, a successful businessman, president and treasurer of Hydraulic-Press Brick Company, and Charlotte Champe Stearns, a poet and social worker. Eliot belonged to a prominent Unitarian Saint Louis Missouri family as his fifth cousin, Tom Eliot, was the Chancellor of Washington University while his grandfather, William Greenleaf Eliot, was the school’s founder.

Eliot received his formal education at Smith Academy from 1898 to 1905 where he learnt Latin, Ancient Greek, French, and German. He then went to Milton Academy at Massachusetts followed by entering Harvard University to study philosophy. He graduated in 1909 with a bachelor’s degree after three years, instead of the usual four, and went ahead to work as a philosophy assistant at Harvard for one year. In 1910, he moved on to Paris to study philosophy in Sorbonne. However, he was back to Harvard in 1911 to study Indian philosophy and Sanskrit during which he was awarded with a scholarship to Merton College, Oxford in 1914.

After Merton College, Eliot turned school teacher, teaching French and Latin at Highgate School, a private school in London. He later shifted to Royal Grammar School, High Wycombe in Buckinghamshire. In 1917, he joined Lloyds Bank in London looking after foreign accounts. While journeying to Paris in 1920, Eliot met writer James Joyce and artist Wyndham Lewis with whom he became good friends eventually. However, he left Lloyds in 1925 only to take up another position in a publishing firm Faber and Gywer, later known as Faber and Faber.

Influenced by his mother, Eliot started writing poetry as early as 14 years. Edward Fitzgerald’s ‘Rubaiyat of Omar Khayyam’, however, turned out to be the major influence of Eliot’s poetry. Initially, his poems were published individually in periodicals or small books. Amongst them was ‘The Love Song of J. Alfred Prufrock’ published by Ezra Pound in 1915 in Poetry magazine, after seeking permission from the magazine’s founder, Harriet Monroe. However, it was only in 1917 that his first collection of poems was published as ‘Prufrock and Other Observations’. More poems came up from his kitty as ‘Ara Vos Prec’ in London and ‘Poems: 1920’ in New York. ‘The Waste Land’ followed up in 1922. The ‘Poems: 1909-1925’ published in 1925 comprised of all his poems of ‘Prufrock’ and ‘Poems’, and ‘The Waste Land’ with a new addition ‘The Hollow Men’. These were followed by ‘Ash Wednesday’, ‘Old Possum’s Book of Practical Cats’, and ‘Four Quartets’.

Eliot had been an immense admirer of Elizabethan and Jacobean verse drama. After writing ‘The Waste Land’ in 1922, Eliot was looking for a new form and style to experiment on, thus, started his journey of trying his hand at writing plays. His ‘Sweeney Agonistes’ published in 1932 comprised of two parts ‘Fragment of a Prologue’ (1926) and ‘Fragment of an Agon’ (1927). The play ‘The Rock’ in 1934 was his next work, after which he penned several such others. These included ‘Murder in the Cathedral’, ‘The Family Reunion’, ‘The Cocktail Party’, ‘The Confidential Clerk’, and ‘The Elder Statesman’.

‘Four Quartets’ published in 1945 was considered lucky and Eliot’s masterpiece, as it was only after this poem that he was bestowed upon with the Nobel Prize for Literature in 1948. Soon after, he was awarded the Order of Merit by King George VI of UK in 1948. Since then, there was no looking back as his list of honors continued to grow.

Eliot’s first marriage was settled with a Cambridge governess, Vivienne Haigh-Wood. They married secretly on June 26, 1915 at Hampstead Register Office in England. However, this did not turn out to be a happy affair for long, as they both separated in 1932, after Eliot was offered professorship from Harvard. Thereafter, Vivienne was admitted to the Northumberland House mental hospital, Stoke Newington in 1938, after being diagnosed with hysteria. Vivienne spent the remaining years of her life at the mental hospital until her death in 1947. In 1957, Eliot remarried his private secretary, Esmé Valerie Fletcher, at Faber and Faber. 37 years younger to him, both blended well with one another and took the wedding vows on January 10, 1957. Both stayed together until Eliot’s death in 1965.

Towards the end, Eliot had been suffering from several health problems mainly due to his heavy smoking and was diagnosed with bronchitis or tachycardia. On January 4, 1965 Eliot breathed his last and died of emphysema. As per his desire, he was cremated at Golden Green Crematorium and his ashes were then taken to England and buried in East Coker, Somerset, a place from where his ancestors immigrated to America, at the Parish Church of St. Michaels.

1909: Graduated with a bachelors’ degree in philosophy

1910: Went to Paris to study philosophy at Sorbonne

1911: Returned to Harvard to study Indian philosophy and Sanskrit

1917: ‘Prufrock and Other Observations’ was published

Check out some enlightening quotes by T.S. Eliot that will give you food for thought.