The Pink City, Jaipur, has host of tourist attractions to offer. Check out the places to see in Jaipur, India.

Also known as the ‘Pink City’, Jaipur is the capital city of the state of Rajasthan. It was founded in the year 1727 A.D by Maharaja Sawai Jai Singh. Named after its founder, the city is one of the first planned cities in India. Jaipur is a sought after tourist destination in the state, owing to its rich historical past and age old grandeur. The royal fervor can be evidently experienced from the ancient monuments dotting the city, lifestyle of the people, culture and the food. Surrounded by three magnanimous forts, carpeted with lush gardens and splashed with serene lakes, a visit to Jaipur is a sheer delight for visitors. To know some of the major tourist attractions and places to see in Jaipur, read on. 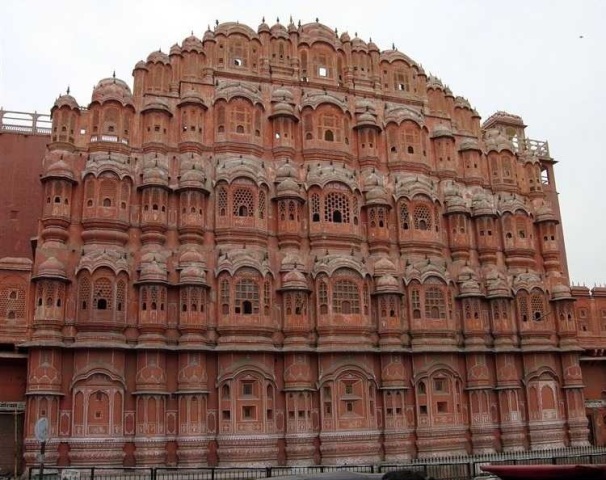 Image: [email protected]
Places to See in Jaipur
City Palace
Built by Maharaja Sawai Jai Singh, the palace is an excellent blend of Mughal and Rajasthani architecture. On entering the palace complex, the first structure is Mubarak Mahal, built by Sawai Madho Singh in 19th century. It now houses a museum dedicated to Maharaja Sawai Man Singh II, showcasing royal costumes and bulky clothes worn by former rulers. The Diwaan-e-aam houses an art gallery displaying rare manuscripts, scriptures and paintings.
Hawa Mahal
Hawa Mahal is the main landmark of Jaipur. Built by Maharaja Sawai Pratap Singh, the five storied pink sandstone structure is known as the Palace of Winds, as it boasts of 953 intricately carved windows overlooking the busy bazaar street. Originally, constructed for the royal ladies, this is an excellent example of Rajput architecture. Apart from providing an extensive view of the city, the sunset viewed from its latticed windows is an unforgettable experience.
Jantar Mantar
Another intriguing monument in the pink city is Jantar Mantar. It is one of the five observatories in India and was built by Maharaja Sawai Jai Singh. Providing an insight into the fields of numerology and astronomy, it houses ancient astronomical instruments chiseled out of stone. The most interesting instrument here is the Sundial. The shadow cast on it helps in the determination of local and meridian pass time. Besides, varied attributes of the heavenly bodies can also be calculated with the help of it.
Birla Mandir
Also known as the Lakshmi Narayan Temple, it is located near the Moti Dungri Fort. Built entirely out of white marble, the temple is dedicated to Lord Vishnu and Goddess Lakshmi. The temple has three domes which represent different approaches to religion. A major tourist attraction, the temple is highly crowded during festive time.
Albert Hall Museum
One of the oldest museums in the state, Albert Hall museum is situated amidst the sprawling Ram Niwas Bagh garden on the outskirts of Jaipur. The museum combines the fine elements of English and north Indian architecture and was opened in 1980s. It houses rare royal artifacts, miniature paintings from different schools of Rajasthan, carpet by Mirza Jai Singh I from Shah Abbas of Persia and an Egyptian mummy belonging to the Ptolemaic Epoch.
Kanak Vrindavan
Situated on the foothills of Nahargarh Hills, these are beautiful landscaped gardens with an intricately craved temple made of beige stone. The sprawling complex is laid with terrace sites, marble columns and lattices. The place is quite popular amongst picnickers and film makers owing to its splendor. The ideal time to be around here is during monsoon, as it sparkles after being washed from the rain water.
Amber Fort
Popularly known as the Amer Fort, it is one of the most magnificent monuments, situated on the outskirts of the city. The ruling fortress of the Kachhawa clan of Amber, it is an excellent blend of Hindu and Mughal architecture. The interiors of the palace are laid with expressive painting scenes with carvings, precious stones and mirror settings.
Other Attractions
Some of the other places worth visiting in Jaipur include Jaigarh Fort, Nahargarh Fort, Jal Mahal, Govind Dev ji Temple, Galtaji, Gaitore, Sisodia Rani Ka Bagh, etc. Besides, Jaipur is a paradise for all those, who love shopping and food. The ethnic items showcasing the traditional and royal art are a must buy here. Furthermore, you can pamper your taste buds with delicious Rajasthani cuisine and delicacies. In effect, Jaipur has proved to be a must visit tourist destination in the desert yet enigmatic state of Rajasthan.
Accommodation
Owing to the fact that Jaipur is a popular tourist destination, it houses a number of varied accommodation options catering to visitors from all economic backgrounds. The 5 star hotels in Jaipur include Le Meridien, Hotel Clarks, Hotel Mansingh, Oberoi Rajvilas etc. Apart from this, there are a host of heritage and budget hotels in the city.
How to Reach
By Air
The nearest airport is situated 10 km from Jaipur, which is known as the Sanganer Airport. It operates domestic flights which connect it with Delhi, Kolkata, Mumbai, Ahmedabad, Jodhpur and Udaipur.
By Train
Jaipur is well connected to all the major cities of Rajasthan and India by trains. There are regular trains to cities like Delhi, Agra, Chennai, Jodhpur, Mumbai, Udaipur, Bikaner and Ahmedabad.
By Road
A well-developed network of road connects Jaipur to important places in Rajasthan and north India. Private as well as government buses ply from here at regular intervals which connect Jaipur to all the nearby major cities such as Delhi and Agra.
How to Cite