Women all over the world are adorning their tresses in French braid style. If you too want to flaunt this style, browse through the article and learn how to do it.

How To Do A French Braid

Ironic as it might sound, though popularly known as a French braid, the style did not originate from France. And least of what you would expect, the French themselves refer to the braid by a different name. Nevertheless, keeping these astonishing yet true facts aside, to women who love styling their hair, the French plait or braid is the way to go for. Unlike the English braid, where the three sections of hair meet at the head scalp, in the French braid the hair is divided into three sections which begin from the head crown. Also, it looks far more intricately done than Normal English braid. A French braid should be done in such a way that every overlapping strand of hair is in its place and is tightly held together. You may highlight the plaits with colorful clips or ribbons. Doing multiple French braids on the head is also one of the latest fashion trends. However, not many know the process to do a French braid by themselves. Most of us usually visit the salon for the purpose. But why spend those hard-earned bucks in an overpriced salon when you can get the same effect at home? Given below is step by step process of doing a French braid. Whether it's a skirt, a tunic or a sari, the French braid looks good with almost anything. 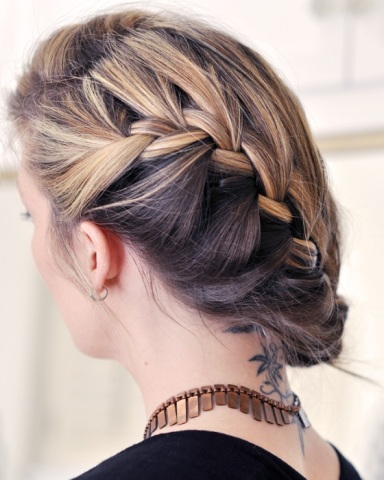 Image: ...love [email protected]
Steps To Do French Braid
Though this is the easiest step by step process to do a French braid, getting the perfect braid may not be possible in your first attempt. The French braid is a matter of practice, the more you do the better will your plait look. Needless to say, a French braid looks the best in long hair, because more the space more intricate will your plaits be.
How to Cite

How To French Braid

How To Do A French Twist

How To French Manicure

How To Do A Basic English Braid

How To Cornrow Hair