Cairo, the capital city of Egypt, has many interesting places that tourists would love to see. Amongst the many things to do in Cairo is visiting its various tourist attractions.

Languages: Egyptian Arabic, English, French and/or Italian
Best Time to Visit: November to March
Time Zone: EET (UTC+2)
Driving Side: Left Side
Main Attractions: Great Pyramids of Giza, Egyptian Museum, The Citadel, Cairo Tower, An-Nasir Mohammed Mosque, Townhouse Gallery, etc
Cairo is the capital of Egypt, apart from being the largest city of the country. Situated in North Africa, it finds its origins dating back to, as far back as, more than 6000 years ago. However, the modern city of Cairo came into being somewhere around 969 AD, as a result of invasion by the Muslim invaders from Tunisia. With the opening of the Suez Canal, in 19th century, the city witnessed major growth and gained the status of the hub of trade with Europe, Asia and Africa. Today, Cairo is the one of the most significant cities in Egypt. Apart from being a business hub, it is visited by many tourists every year and charms them with its historic towns, superb monuments & ancient pyramids. If you want to gather information on things to do and places to see in Cairo, browse further.
Cairo Tourist Attractions
Pyramids
The most popular attraction of Cairo, Great Pyramids of Giza attracts hordes of tourists every year. Situated on the outskirts of the city, the pyramids are the only wonder remaining from ‘Seven Wonders of the Ancient World’. Apart from that, Great Pyramids of Giza, are also an honorary member of the list of the new ‘Seven Wonders of the World’. Said to be built as a tomb for ‘Khufu’, the 4th dynasty Egyptian Pharaoh, Great Pyramids date back to 2560 BC. While there, make sure to visit ‘Pyramid of Khafre’ and ‘Pyramid of Menkaure’, situated nearby.
Museums
Being steeped with history, it is natural that Cairo will have a large number of museums, serving as a repository of its rich legacy. The Egyptian Museum boasts of housing the largest and the finest collection of Egyptian and Graeco-Roman antiquities, in the whole world. Then, there is the Museum of Islamic Arts that, apart from being a UNESCO World Heritage Site, houses a varied collection of Islamic paintings and other art forms. Military Museum, Townhouse Gallery, Coptic Museum Al-Gawhara (Jewel) Palace Museum also merit a visit.
The Citadel and The Cairo Tower
Amongst the most-visited sites in Cairo, The Citadel is the perfect place to spend the entire day. Built on a spur of limestone, it houses numerous museums, ancient mosques and other sites, within its complex. It is also the best place to have a bird’s eye view of the entire city. Another popular attraction, which is not to be missed, is Cairo Tower. It is situated on an island in the Nile and provides mesmerizing views of the surrounds. If you feel hungry after a while, go to the revolving restaurant at the top and have your fill.
Mosques
If you have come to Cairo, you cannot leave without making a trip to its beautiful mosques. An-Nasir Mohammed Mosque dates back to the early 14th century and stands adorned with exquisite Mameluke architecture. Barquqiya Mosque El-Azhar Mosque, near Sharia Gohan el-Qaid intersection, is an architectural beauty and forms one of the leading educational centers of the Islamic World. Other major mosques are Ibn Tulun Mosque (Cairo’s 2nd largest mosque), El-Aqmar Mosque, El-Hakim Mosque, El-Mardani Mosque and El-Rifai Mosque.
Entertainment (Theaters, Casinos, Clubs and Bars)
Those interested in theater will find Cairo a delight. National Cultural Centre holds opera and ballet performances, while the Cultural Palace Sector woos visitors with its cultural shows. If you are game for folk performances and circus, State Theatre is the place to head. Though Cairo is a historical city, it does not mean that Cairo lacks a pulsating nightlife. Whether you want to dance to the beats of jazz or rock, love to try your luck at the casino or are simply content with sipping your drink, Cairo will not disappoint you.
Shopping Places
A trip without shopping, be it any place of the world, does not feel right. In Cairo, you will find no dearth of shopping places. Khan al-Khalili, situated within Islamic Cairo, is one of the largest markets of the world. Right from traditional Arabic items to perfumes and small knick-knacks, you will everything here, but do make sure to bargain a little. Khan Misr Touloun is another place to buy souvenirs for yourself and for those back home. Visit Tent Makers' Bazaar for appliqué-work, Wekalet al-Balah for fabrics & Mohammed Ali Street for musical instruments. 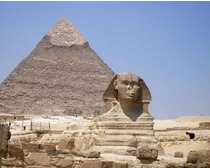