Manali is a beautiful hill station located in the Kullu Valley of Himachal Pradesh. Explore the tourist attractions of Manali.

Situated amidst the picturesque Kullu Valley, Manali is a place definitely worth visiting on a tour to Himachal Pradesh. The immense natural grandeur of the hill resort, present in the form of soaring peaks, flowering valleys, blooming orchards and wooded slopes, is enough to make anyone fall in love with it. Further adding to its beauty is the Beas River, which gracefully meanders its way through the heart of the town. For those who seek adventure, sports like mountaineering, skiing, river rafting and paragliding are the best bet. If sightseeing is what you vouch for, go on a tour of the beautiful temple and magnificent monasteries of the place. If you get too tires, lie under the shade of deodar and pine trees and slowly savor the beauty of nature. 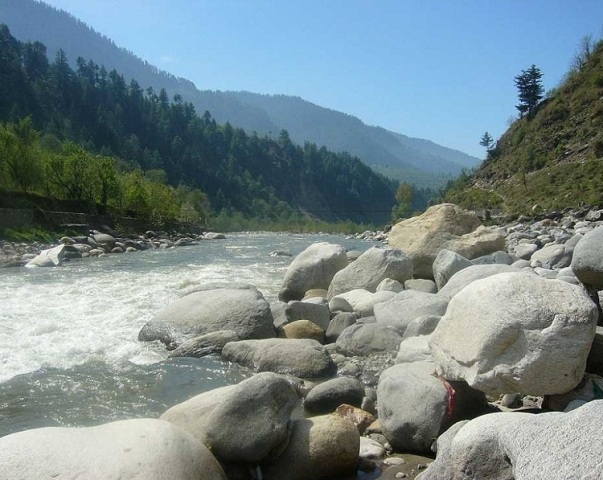 Image: By Shahnoor Habib Munmun (Own work) [CC-BY-3.0 (http://creativecommons.org/licenses/by/3.0)], via Wikimedia Commons
Places to See in Manali
Hadimba Temple
One of the most popular tourist attractions in Manali is the Hadimba Temple. Located right in the center of the forested areas of the Dhungiri Van Vihar, the shrine is dedicated to Hadimba Devi, a ‘Rakshashi’ whom Bhima fell in love with. A four-story wooden temple, it was constructed under the aegis of Raja Bahadur Singh and is also known by the name of Dhungiri temple.
Manu Temple
As per the legends, Manali was formed by Manu Rishi, the sole person who survived the flooding and the subsequent destruction of the whole world. Built in the commemoration of the great Rishi is the Manu Temple. It is situated in the old Manali and can be reached only by crossing slippery stone paths.
Vashisht Springs & Temples
Vashisht Springs is the name given to the hot sulfur springs that can be seen gushing from the mountains at Vashist. It is believed that the water of the springs has medicinal properties. Many people come here to take a dip in the bathing tanks, fed by the spring water. Situated nearby are the temples of Vashisht Rishi and Lord Rama, which stand facing each other.
Tibetan Monasteries
The Tibetan monasteries of Manali are definitely worth having a look at. Amongst the most prominent ones is Thekchoking Gompa, which was constructed in the year 1969. It is situated around the bottom of ‘The Mall’ and houses colorful frescoes and a mid-size Buddhist statute. Himalayan Nyingamapa Gompa, housing a gold faced statue of Lord Buddha, is also worth a visit.
The Mall
Just like most of the other hill stations in India, Manali also has a market known as ‘The Mall’. It is basically a long street, lined with shops that sell various traditional Tibetan, Himachali and Kashmiri handicrafts. Apart from Chinese clothes and shoes, prayer wheels, amulets, masks, musical instruments and jewelry are amongst the most popular items here.
The Club House
If you want to go on a picnic in Manali, The Club House is just the place to be. Situated around 1.5 km from Tourist bureau (bus stand), it is a beautiful modern building. It houses sprawling lawns, a restaurant as well as a well-stocked bar. In case you are looking for some fun, check out the facilities for racquet games, billiards, skating rings and various children games.
Nehru Kund
Nehru Kund is a clear cold water spring, situated on the Manali-Keylong road, at a distance of approximately 6 km from the main town. The spring is said to have originated from Bhrigu Lake. The name of the spring has been kept after the former Prime Minister of India, Jawaharlal Nehru, who always used to drink water from it, during his stay in Manali.
Arjun Gufa
Another popular attraction situated on the outskirts of Manali is Arjun Gufa (cave). It is around 5 km from the main town and stands adorning the banks of Beas River. As per the local legends, the cave is the same place where Arjuna, one of the Pandava brothers, indulged in meditation to get the 'Pashupati Astra' (a powerful weapon) from Indra.
Accommodation
The mesmerizing locales, magnificent monasteries & exciting adventure options offered by Manali attract tourists from far and wide. With the increasing tourist inflow, the number of hotels in Manali has also witnessed an upward trend. Whatever your needs, right from luxury to budget, Manali will have the right accommodation for you. Some of the best five-star hotels include Span Resort. As for the four-star hotels, you have Apple Valley Resort, Holiday Inn, Manali Heights, etc. For a combination of facilities and budget, go for three-star hotels like Glacier Resort, Hotel Classic, etc. If economy is what you need, then Hotel Highland, Hotel Holiday Village and Hotel Snow Park are amongst the best ones.
How to Reach Manali
By Air
The nearest airport from Manali is at Bhuntar, situated at a distance of around 50 km from the main town.
By Rail
Jogindernagar, approximately 135 km away, forms the nearest narrow gauge railway station from Manali. The nearest broad gauge railhead is in Chandigarh.
By Road
Manali boasts of a good road network, connecting it with all the key cities in and around Himachal with buses and taxis.
How to Cite