Madhya Pradesh, the Heart of India’ boasts of numerous, varied tourist attractions. Explore more on the places to see in Madhya Pradesh.

Said to be the ‘Heart of India’ because of its strategic location, Madhya Pradesh is a state that forms a must-visit for those who want to explore Indian culture at its best. It is the place where you will find the perfect amalgamation of history, art, architecture and culture. The state has been there since the Paleolithic era, Bhimbetka Caves serving as the proof, and has also witnessed Buddhism at its very peak, as seen through the Sanchi Stupa. Be it natural splendor, in form of various wildlife parks, or architectural brilliance, experienced through Khajuraho temples, Madhya Pradesh vows to mesmerize its visitors. To explore the tourist attractions of the state further, browse through the following lines. 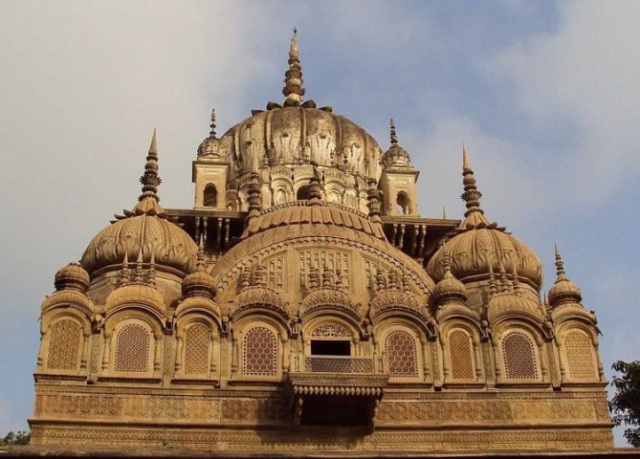 Image: By Harshit agrawal bhola (Own work) [CC-BY-SA-3.0 (http://creativecommons.org/licenses/by-sa/3.0)], via Wikimedia Commons
Places to See in Madhya Pradesh
Khajuraho
Such is the popularity of the temples of Khajuraho that, at times, Madhya Pradesh seems to be synonymous with them. Located in a village of the same name, these temples stand adorned with erotic sculptures, which seem to celebrate the untold moods and facets of a woman. Divided into three groups, Western, Eastern and Southern, the 25 temples have been jointly declared as a UNESCO World Heritage Site. A trip to MP, without a visit to these architectural beauties, can never ever be complete.
Sanchi
One of the most revered Buddhist sites in India, Sanchi stands crowned with a large number of stupas and monasteries. It is a small town in Madhya Pradesh that boasts of receiving majority of the visitors to the state. The single most popular attraction of the town is the ‘Great Stupa’, which houses the holy relics of Lord Buddha. Apart from the stupa, Ashoka Pillar, Gateways of Sanchi, Buddhist Vihara, Gupta Temple and Sanchi Museum are also worth-visiting.
Bandhavgarh National Park
The wildlife-lovers cannot go back from Madhya Pradesh without going on a safari of the Bandhavgarh National Park. Home to the majestic tiger, apart from leopards, rhesus, gaur, chital, dholes, nilgais, wild boars, etc, the park is a must-see place. The bird lovers can also rest easy, as Bandhavgarh is home to a huge avian population, comprising of steppe eagles, orange-headed thrush, browed fantails, coppersmith barbet, etc.
Panchmarhi
The lone hill station of Madhya Pradesh, Panchmarhi is one of its most-visited tourist destinations, especially in summers. The nature lovers come here to bask in the glory of soaring peaks, deep gorges, lush green forests and breathtaking sunsets. The most prominent attraction of the hill resort comprise of the Pandava Caves, said to be visited by the ‘Pandava Brothers’, during their exile. You can also undertake an excursion to the Satpura National Park from here.
Kanha National Park
Another major bastion of the largest ‘Big Cat’, Kanha National Park forms an excursion trip from Jabalpur. Use the 'Sunset Point' or 'Bamni Dadar' to witness the beast residing along with leopards, bisons, barking deer, mouse deer, sloth bear, jackal fox, hyena, python, mongoose, etc. Birds like storks, peacocks, teals, pintails, pond herons, egrets, pea fowl, spotted parakeets and jungle fowl, make up the avifauna of the park.
Bhimbetka Caves
Whenever you visit the capital city of Bhopal, make sure to go on a short excursion tour to Bhimbetka Caves, serving as the repository of the prehistoric art and architecture of India. Discovered by Dr V. S. Wakankar, these caves number to more than 600 and have been listed as a World Heritage Site by UNESCO. As you go inside the caves, you will find the walls adorned with paintings belonging to the Paleolithic, Mesolithic and Neolithic periods.
Ujjain
One of the holiest cities of India, Ujjain makes up one of the seven major sites of Hindu pilgrimage. It is said that it was here that Lord Shiva annihilated the demon ruler of Tripuri. The city is also regarded as one of the places where ‘the holy nectar (amrit) fell, during the churning of ocean (Samudra Manthan), the reason why it is one of the venues of the Kumbh Mela. Amongst the major attractions of Ujjain are Bade Ganeshji Ka Mandir, Harsiddhi Temple, Mahakaleshwar Temple, Bhartrihari Caves, Kaliadeh Palace, Gadkalika Temple, etc.
How to Cite