Monte Carlo is a posh city in the principality of Monaco, providing ample things to do. Check out more on the tourist attractions and places to see in Monte Carlo.

Things To Do In Monte Carlo

Languages: French, Italian, English
Best Time to Visit: February to May andSeptember to November
Time Zone: GMT+1
Driving Side: Right Side
Main Attractions: Monte Carlo Casino,Monaco Cathedral, Palais du Prince, Oceanographic Museum and Aquarium
Monte Carlo is a swish city in the principality of Monaco, located in Western Europe. The city is known to be a haven for the rich and famous, flaunting their wealth and exuberance in casinos and Grand Prix race held here. The elegant city was founded in 1866 and is named after, the then reigning, Charles III of Monaco. Being the richest amongst the four quarters of the country, it has been primarily visited by the affluent population. Monte Carlo is laced with dynamic casinos, luxury hotels, feisty nightclubs and delightful restaurants. The spectacular view of the Mediterranean leaves the visitors completely spell bound in its beauty. Thus, there are a number of things to do in Monte Carlo, which will keep you interested and amused. To know about the tourist attractions and places to se in Monte Carlo, read on.
Sightseeing
There are a number of places to see in Monte Carlo, which will make your sightseeing tour an enjoyable and memorable one. Palais du Prince is the princely palace of the Prince of Monaco. Established around 13th century, it has been the residence of Grimaldi family ever since. However, the generations which resided in the palace have left their mark on the castle, making it one of the most beautiful palaces in Europe. It has 15 rooms, including a Throne Room open to the public. Another attraction is the Napolean Museum, which is attached to the palace. It houses artifacts once belonging to French Emperor Napolean I.
The Museum also houses a collection compiled by Prince Louis II, the grandfather of the present Prince of Monaco. The collection exhibits numerous possessions of the Emperor, including letters and documents. Next is the Oceanographic Museum and Aquarium, which was established in 1910 by Prince Albert. The museum showcases his personal collection of marine life, models of his laboratory ships and other crafts made from marine products. The aquarium is in the basement & houses 4,000 fish species, 200 invertebrates and the Shark Lagoon. Besides, the Monaco cathedral is yet another worth visiting place in the city. Built in 1875, it is dedicated to Saint Nicholas.
Sporty Events
The sport lovers can have an enthralling time in the city, as it organizes a number of sports events every year. The greatest event which takes place in the city is Circuit de Monaco. It is the Formula One Monaco Grand Prix, which is held here on an annual basis. Apart from this, the city holds world championship boxing bouts, the Monte Carlo Masters, European Poker Tour Grand Final, fashion shows and other events. Moreover, the Monte Carlo Rally, held in the city, is the longest running and venerated sports event, which marks the beginning of the World Rally Championship Calendar.
Entertainment
If you are in Mote Carlo, rest assured for the fact that you will never ever get bored. The city offers a plethora of entertainment options, which will keep you busy as well as amused. There are many casinos, clubs and cafes in Monaco, which provide world class facilities for recreation. The Monte Carlo Casino is a lavish world-renowned casino, which was established by Charles Garnier in 1878. The casino houses the Salle Garnier, which organizes ballet, opera and concerts, while the Gaming Rooms are equipped with all the means one would expect from a top-class casino. 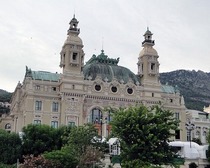