Istanbul, the most populous city of Europe, boasts of a wide variety of tourist attractions. Read on to know about the places to see and things to do in Istanbul.

The cultural and financial center of Turkey, Istanbul is located in the Bosphorus Strait. It falls in the northwest part of the country and encompasses the natural harbor, known as the Golden Horn, within its precincts. The most populous city of Europe, it stands surrounded by Black Sea in the north and Sea of Marmara in the south. One of the unique features of Istanbul is that its western half lies in Europe, while the eastern half falls in Asia, making it the Asian city nearest Europe and the European city closest to Asia. Boasting of a rich historical past, the city attracts its visitors with its host of World Heritage Sites. Apart from that, its tourist attractions comprise of numerous shopping opportunities, glitzy nightclubs, museums and the age-old Turkish baths. To know more about the places to see and things to do in Istanbul, browse further.

Explore the History (Museums)
The numerous museums of Istanbul present the perfect opportunity to delve into the rich legacy of the city. The most prominent one is the ‘Archaeological Museum’, housing a compilation of artifacts & art works belonging to ancient Greek, Roman and other Anatolian civilizations, dating back to 6th century BC. Then, there is the ‘Calligraphy Museum’, exhibiting examples of the Turkish art of the pen, Korans, imperial seals, diplomas, Hilye-i serif equipment, etc. Other prominent museums include Sadberk Hanim Museum, Modern Arts Museum (only one of its kinds in Istanbul), Fine Arts Museum, City Museum, etc.
Feel One with God (Mosques, Churches, Synagogues)
Istanbul, even being a Muslim-dominated city, houses a number of churches and synagogues, apart from mosques. Amongst the most prominent mosques in the city are Sultanahmet, Suleymaniye, Fatih, Yeni Cami, Ortaköy Mosque, Dolmabahce Mosque, Zeyrek Mosque, etc. As far as churches are concerned, Saint Antoine Church, built as per Italian Neo-Gothic style, is the largest. Apart from that, The Bulgarian Church, Virgin Mary Suryani Church and Anglican Church are also worth visiting. For those who would be interested in visiting synagogues, Neve Þalom Synagogue is the best bet.
Go Back to the Royal Times (Palaces and Castles)
There are so many palaces in Istanbul that on a short trip, you will find it almost impossible to explore them fully. Amongst the oldest ones is Sepetciler Kasri, built by Sultan Murat III, in the 16th century. A part of it has been converted into a restaurant and a night club and is open to general public. Another palace of the 16th century is Topkapi, an Ottoman palace that provides some of the most magnificent views of the city. Other worth-visiting palaces include Dolmabahce, Yildiz, Beylerbeyi and Ciragan. Then, there are Rumeli Hisari, Yedikule Hisari and Anadolu Hisari - castles boasting of impressive architecture.
Rejuvenate Yourself (Turkish Baths)
Does the thought of luxuriating in hot water make you feel refreshed even right now? If your answer is yes, make sure to visit atleast one of the numerous Turkish baths in Istanbul. They are nothing more than the Middle Eastern variant of a steam bath, though much more relaxing. The Cemberlitas Hammam, situated near the Great Bazaar, and Cagaloglu Bath, near the Underground Cistern, are amongst the most popular ones. Other worth-visiting baths are Galatasaray Bath, Cardakli Bath, Suleymaniye Bath and Buyuk Bath.
Go on a Shopping Spree (Bazaars)
Love to go shopping? Istanbul wouldn’t leave you feeling disappointed in this regard. The Grand Bazaar (Kapalicarsi) of the city is one of the oldest and largest covered markets in the world. Built of wood, the bazaar is known to house over 3000 shops and is the place to get anything and everything, including traditional goods. Egyptian Bazaar (Spice Bazaar) has shops selling goods other than spices also. Another market known for traditional goods is Arasta Bazaar (Sipahi Carsisi). For those who love to read, Sahaflar Carsisi, the secondhand books market is the best.
Soak in the Sun (Princess Islands)
If you were thinking that Istanbul is only about architectural beauty, get your fact right. The Princess Islands, the nine islands off the Asian coast of Istanbul, present the perfect opportunity to explore sun and sand. You can avail the services of the regular passenger ferries and fast passenger ferries to four of the islands, from the piers in the city. Since general public is not allowed to take motor vehicles on the islands, you can either rent a bicycle or hire a horse-drawn carriage. Apart from frolicking in the sand, you can also explore the monasteries, historic buildings & Victorian-style old wooden mansions, situated there.
Enjoy (Bars and Clubs)
Tired of roaming around and shopping? It is the time to enjoy yourself in the numerous bars and clubs of Istanbul. If you want to get a taste of the historic pubs and winehouses of the city, check out the areas around Ýstiklal Avenue in Beyoðlu. Cezayir Street, sitauted near Galatasaray Lisesi, is known as La Rue Française and has rows of francophone pubs, cafés and restaurants, playing live French music. For checking out the pulsating nightlife of the city, you need to visit Bosphorus, known for its open-air seaside night clubs. Parkorman, in Maslak, is a popular venue for live concerts and rave parties in summers. 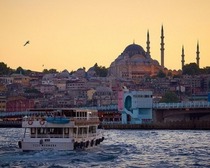