Bernese mountain dogs are highly intelligent and make a friend for life. Learn all about the Bernese Sennenhund dog breed, through the information given here. 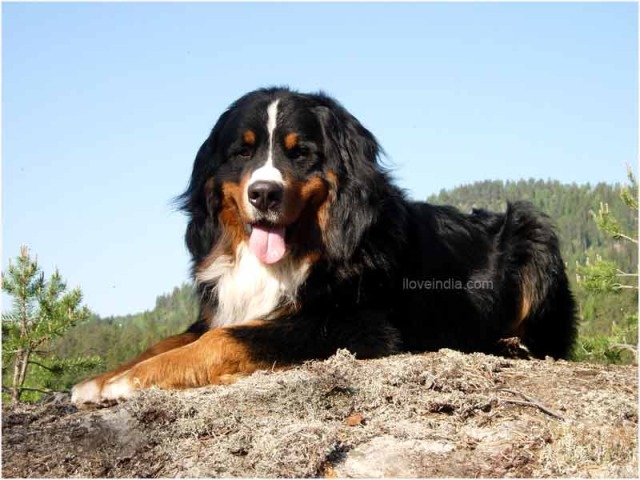 Weight: 65-120 lb (29-54 kg)
Height: 23-27.5 in (58-70 cm)
Coat Type: Thick, moderately long, slightly wavy or straight
Bernese mountain dog, also referred to as Bernese Sennenhund, is one of the four breeds of Sennenhound dogs, native to Swiss mountains. The working dog was brought to Switzerland by the invading Romans some 2000 years ago and was used as both draft animal and farm dog. Known with different names, it is a versatile breed of dog that is agile, obedient, tracker, and therapy worker. The dog can be used in carting, tracking and herding. Bernese mountain dog is known for it cheerfulness, good nature and loyalty. It is not at all dominating and would stay with you just like your own child. The dog is a perfect buy for all those people who are alone or single and crave for a friend in a pet. Read on to know everything about the lovely Bernese mountain dog, before bringing it home with you.
History
Like many other mountain dogs, Bernese dog too is assumed to have descended from the wolf. The breed originated in Swiss mountains and the name ‘Berner’ refers to the area of the breed’s origin i.e. in the Canton of Berne, in Switzerland. The breed was used as a working farm dog that was assigned with duties like pulling carts, guarding the farm, draft work, driving dairy cattle and being the farmer’s companion. Bernese Sennenhund was originally known as Godly for a small town (Dürrbach), where it was found in large number. However, the dog declined in numbers during the Civil War and in the late 19th century, when the workers started using other imported dogs that were brought to Switzerland. The efforts to preserve the breed were made by a group of people, including Professor Albert Heim and Franz Schertenleib, who went around finding the remaining dogs to stabilize the breed. In 1937, Bernese mountain dog was the first breed of dog that was recognized by the American Kennel Club.
Appearance
Bernese mountain dog is a large, powerful and heavy dog, with a body that is slightly longer than it’s taller. It possesses dark brown eyes, broad head, scissor-type teeth, medium sized, triangular ears that are set high with a facial expression that is gentle, animated and intelligent. It has a masculine structure (females have feminine look), with well-sprung deep chest and strong & straight muzzle. The body is covered with thick coatthat is moderately long and slightly wavy or straight and is tri-colored, with black (ground color), brown and white colors. The weather resistant coat color goes black with white chest and/ or eyes, sides of mouth, front of legs have rust colored markings. The tail is bushy and carried low.
Personality
Bernese mountain dog is a cheerful dog that is friendly and devoted to its master, with natural watchdog abilities. The dog is very intelligent and lacks the quality of dominance. Hence, the master would not have to worry about playing the dominant role and can treat the dog as his/her own child. Bernese Sennenhund loves children and adores being with the master and his/her family. Since it is a working dog, it needs ample exercise and hence, should not be confined to the kennel or backyard. It makes a great watchdog and is extremely faithful, intelligent and strong.
Genetic Diseases
Bernese mountain dog should not be over fed, as it gains weight easily. The dog is prone to severe diseases, like bloating, eyelid problems, elbow and hip dysplasia and cancer.
Grooming
Bernese Sennenhund requires daily brushing of the long, thick coat, with special attention during the shedding season, as the breed is a heavy shedder. The dog should be given a bath when it is necessary. 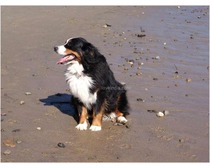 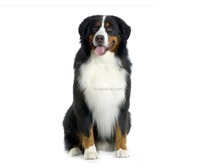