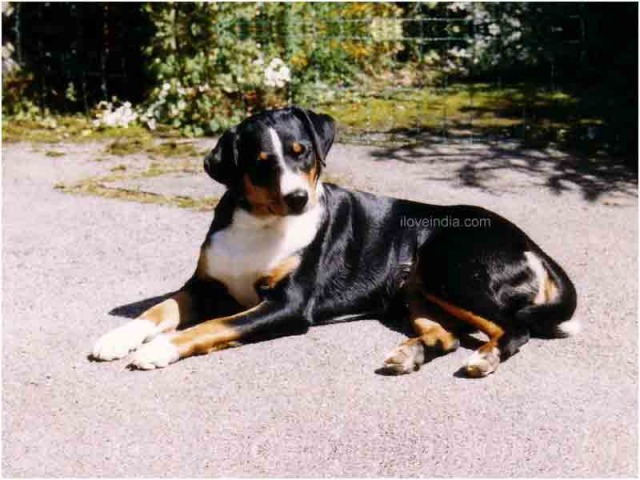 Weight: 49 to 70pounds (22 to 32 kg)
Height: Males - 22 to 23 inches (56 to 58.5 cm); Females - 18 to 20 inches (46 to 50 cm)
Coat Type: Short double coat
Appenzellar Sennenhund is a very popular guard dog, renowned for its inherent instincts and alert nature. Native to parts of Romania, the breed was introduced to Switzerland, wherein it gained international reputation as an excellent working dog. Its strong muscular features, with its sharp eager eyes, bear evidence of the above mentioned fact. Its double layered coat is very easy to look after and hence the breed has very low maintenance requirements. Although Appenzellar Sennenhund socializes with people, it remains close to only one person, with whom it shares a special bond. The dog loves any kind of open space and it is almost impossible to restrict it in a small environment. To know more about this interesting and amazing breed, check out the information given below.
History
Two theories revolve around the origin and nativity of this species of dog. The first theory says that the Appenzell Mountain Dog is a native breed, dating back to the Bronze Age. The second theory states that the breed descended from the Molossus and was brought by the Romans to Switzerland. Appenzellar Sennenhund is the rarest of the four Sennenhunds found in Switzerland. Tireless and extremely hard-working, the dog is very adaptable and is used to bring milk and cheese from the valleys to the house of the merchants.
Appenzellar Sennenhund is an amazing herd dog and can easily pave its way through mountains and steep hilly regions. The breed has descended from the original Sennenhund type, which may have existed in ancient times or come from the Roman ‘cattle dogs’. The first breeding club for the breed was founded by Albert Heim and others in the year 1906. They wrote the first breed standard in 1916. One can find the early reference to the breed’s predecessors in the book ‘Tierleben der Alpenwelt’ (Animal Life in the Alps), which was written in the year 1853. The dog was listed internationally as a separate breed in 1989.
Appearance
Appenzeller Sennenhund dog or Appenzell Cattle Dog is a well built muscular dog that is known for its hardy, robust and versatile features. Although not a very massive dog, it is well-built, with a wide, flat head that tapers down to a black nose. It’s eager and dark eyes are small and it has pendant-shaped ears. The limbs of Appenzeller Sennenhund are straight and it has a tail that remains rolled up on its back. All in all, the breed’s appearance can be categorized by the following words: wall eyes, kinked tail and a double coat. The coat is considerably short and is thick, tight and glossy. Also, the dog has white blaze and rust markings just over the eyes, on the head.
Personality
The basic characteristics of Appenzell Mountain dogs are lively, agile, intelligent, brave and sober. They make very good pets and are regarded as excellent guard dogs. They are very close to their owners and mix very well with them, especially when brought up from a very young age. However, they are not very sure of strangers, although they are open to any kind of socialization. Appenzeller Sennenhunds are very intelligent too and learn very quickly, particularly when trained in the correct manner. While training, they respond and cooperate under a single leader, with whom they tend to bond very closely. What the dog particularly enjoys is ample of open spaces, outdoor activities and freedom. Hence, never expect an Appenzell to sit quietly inside the house, like some sort of couch potato.
Grooming
The breed’s double coat, consisting of straight hair, is quite easy to take care of and requires very little attention. All you need to do is remove the dead hair from the coat time to time, using any kind of rubber brush. 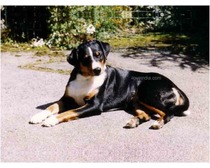 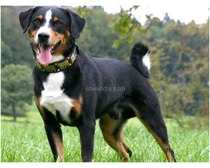