Bakharwal dogs belong to the group of guard dogs and are also in the list of rare dogs. Read on to know about bakharwal dog breed. 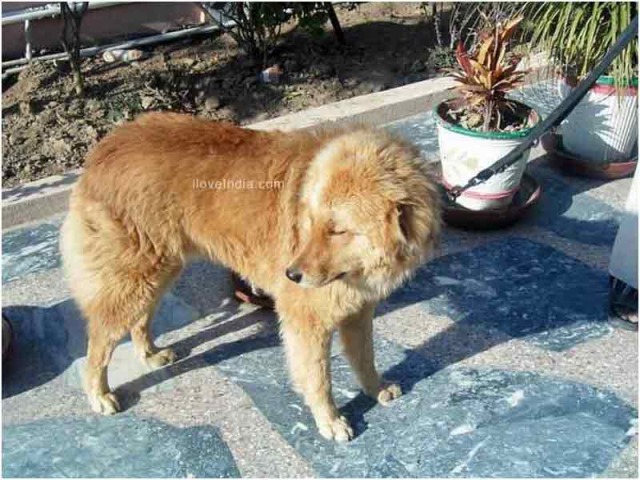 Height: 24 - 30 inches
Coat Type: Medium-length flat coat, thick and dense undercoat
Bakharwal is an ancient breed of dogs, which is primarily found in the Pir Panjal mountain range of the Kashmir Himalayas. This breed has been extensively used by the Gujjar nomadic tribes for many centuries. It has always proved to be an excellent guardian dog. They used the dog to guard the tribe as a whole and also to protect the cattle. Today, bakharwal has become one of the very rare breed of dog. Read on to learn about the history, appearance, personality, and grooming of the Bakharwal dog.
History
Bakharwal is known to share some relation with the Tibetan Mastiff and also with the dogs of Central Asia. It is believed to be a leaner variety of Asian Molossers. However, the Gujjar herdsmen claim that the dog is older than any breed living in the region. It is believed to be related to Hyrcanian Mastiff, Sage Mazandarami, Sylvan, Molossis tis Epirou and Tuvan Sheepdog.
Appearance
Bakharwal is a highly muscular and agile dog. It has strong-boned body, with broad shoulders, long legs and powerful neck. The caninecomes in a variety of colors, like black, tan, tricolor and piebald. It has a medium-length flat coat, with a dense undercoat that provides it with protection in harsh climates. Bakharwal’s coat is fluffy and rough. It has a muscular strong body, which provides it a protection against the infections that affect most of the common dogs.
Personality
Bakharwal is a very active dog, which does extremely well when trained properly. It is highly protective towards its family and proves efficient as a guard dog. The canine is playful and extremely social in character. It can adjust to the new environment comfortably. Bakharwal is extremely habituated to live in the company of human beings and hence grows furious when kept away from people. It reacts aggressively to anybody who enters its territory. It is known for its extreme loyalty and obedience.
Bakharwal is known to be a very reliable dog, which to stays close to its master. The dog needs open spaces and should be taken for regular walks. Since the canine used to live in high places and was put to a lot of physical work, it has developed a strong body. It is tolerant to other pets. In fact, it would prefer to stay hungry than attacking any animal in the same household. It is highly alert and can guard the home against any suspicious stranger.
Grooming
Bakharwal needs to be taken for regular exercise. Since it has a dense coat, it requires regular trimming and grooming, so that it can always be clean and shiny. It has to be brushed once or twice a week regularly.
How to Cite