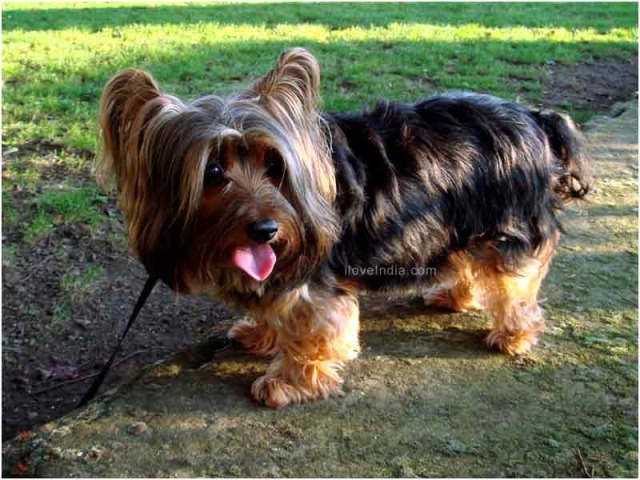 Weight: Males -8to 11 pounds; Females - 8 to 11 pounds
Height: Males -9 to 10 inches; Females - 9 to10 inches
Coat Type: Flat, fine and glossy coat
If you want a cute, adorable canine which is lovely to play with and serves as an excellent watchdog, then Australian silky terrier is the answer. Originated by crossing Australian terrier with the Yorkshire terrier, the canine is playful and intelligent, just like the other terrier dog types. Australian silky terrier makes way to be an excellent companion. The average life span of the dog is about 11 to 14 years. One of the most advantageous features of this dog variety is that it poses no major concern. To get detailed information about the history, appearance, personality and grooming of Australian silky terrier, browse through the following lines.
History
Though Australian silky terrier has the same background as Australian terrier, there is little or no information that explains whether early dogs were just Australian terriers born with silky fur or there was an attempt to create a separate breed. As per the American Kennel Club, the breed came into existence when the Yorkshire terriers were crossed with the Australian terriers. Much unlike the other Australian dogs, Australian Silky terrier was bred to be a pet and companion.Initially, the breed was named Sydney terrier, primarily because it was found in the city of Sydney.
It was only in 1932, after discouragement of crossbreeding, that the breed became officially known as Australian silky terrier. Later, in 1958, it was recognized in the Toy Group by the Australian National Kennel Council. After the World War II, Australian Silky Terrier gained immense limelight, thanks to some Americans who had brought the cute canine with them. The immense popularity resulted in the import of hundreds of Silkies from Australia to United States. It was in 1959 that the American Kennel Club recognized the breed as the Silky terrier. Six years later, the United Kennel Club also recognized the silky terrier, as did the Canadian Kennel Club.
Appearance
Coming to the appearance, Australian silky terrier is small in size, with compact short legs. The dog is low to the ground, with its length longer than the height. It ears are erect and v-shaped, with flat heads that are wider in areas between the ears. While some silky terriers boast of docked tails, the European counterparts may not have so. The canine mostly has almond-shaped eyes that are dark in color, black noses and round, cat-like feet. The feet of Australian silky terrier are well-padded and small in size. However, the most striking feature of the canine is its flat, fine and glossy coat, which hangs straight and gets parted along the back. The coat of Australian silky terriers is available in color combinations of blue and fire red, or blue with tan markings.
Personality
Lively, playful and active are three keywords that describe the personality of Australian silky terrier. Just like a typical terrier, it is a spirited dog, with a lot of intelligence and boldness. However, it has the ability to act stubborn and get mischievous. The canine is both friendly and aggressive. While it enjoys the companionship of children and other pets, it can get hostile to other dogs. The bad habits of the dog include digging and excessive barking. The terrier’s smart, curious, and territorial qualities make it a good watchdog.
Grooming
The grooming of an Australian Silky Terrier requires much attention, as its coat needs to be brushed regularly. This would keep it tangle-free and help in maintaining its luster. To keep it away from tangle, you can clip the coat as well. This would make it manageable and convenient. Its coat must also be trimmed occasionally. Make sure that the hair that falls over its eyes is tied in a topknot. Since silky terrier is relatively odorless, it requires bathing only once in a while. 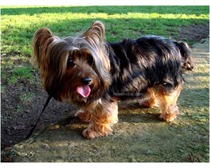 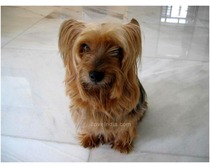