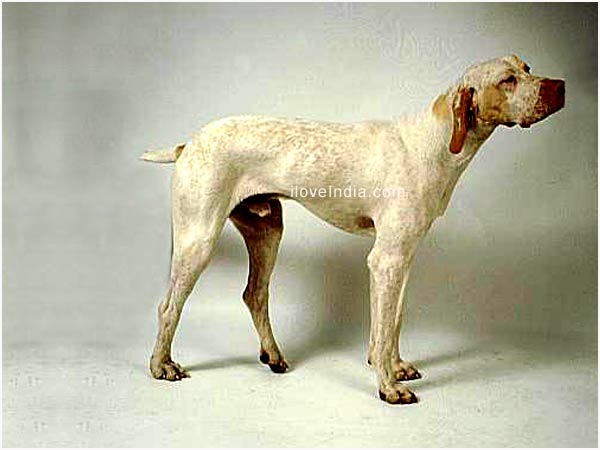 Weight: 25 to 30 kg (55 to 66 lb)
Height: Male - 60 to 67 cm (23.6 to 26.4 in); Females - 56 to 65 cm (22 to 25.6 in)
Coat Type: Short and mainly white
Ariege Pointer is a unique species of hunting dog, developed by some French people as an attempt to preserve the national heritage of their country. These dogs are very energetic and active in nature and love open spaces and ample of exercise. They are very attached to their trainers and the other members of their household. Their well-toned and muscular body bears evidence of their high energy levels. Although Ariege Pointers are never aggressive, they are reserved and hostile towards strangers. They have got an excellent sense of smell and often use their muzzle to point the location of the game. This pointing instinct of the dog starts to manifest at a very early age, of about 2 months. Get to know more about this amazing dog breed through the information provided below.
History
Ariege Pointer is the consequence of the 19th century crossbreeding of the old French Pointing Dog with the orange and white coated pointers from southern France and also with the Saint Germain Pointer, for added lightness and vigor. They were developed by certain hunters in the Ariege region of the Pyrenees, France. However, the breed almost disappeared just before the onset of the World War I. Fortunately; some breeders in the region tried to renew the breed from the few remaining specimens and succeeded in creating a species that closely resembles the original. These people, in fact, dedicated their entire life striving for the survival of the breed that they considered was a part of the national heritage of the country. The outcome of their endeavors led to the creation of a very energetic and robust dog breed that had an excellent sense of smell, making it suitable for all kinds of hunting.
Appearance
Ariege Pointer is a well proportioned dog, with a head that is long and angular. It has a slightly rounded skull, with drooping ears set at the eye level. Its eyes, on the other hand, have a very gentle expression, while reflecting its intelligence and astuteness. Ariege Pointers have well opened nostrils and a muzzle that is straight and long. Their nose color often resembles the shade of their coat and hence, you can never find an them with a black nose. The color of their iris is also very similar to the color of their nose and thus, is also similar to the shade of their coat. The dog has a very firm, muscular and well-toned body frame, with a broad and deep chest that reaches the elbow level. The strong neck of the dog has a little dewlap and the tail has a strong base, tapering to the tip. Its thick and supple skin covers the head and is closely covered with short glossy hair. The coat color would generally vary from a pale orangey fawn to a brown, with mild brown flecks or white ticks.
Personality
An eminent hunting and guard dog, Ariege Pointer is versatile in nature and makes an excellent pet. It can adapt very fast to live with a human family and becomes very attached with them. These dogs are known to accept even older children and are never aggressive or violent in nature. However, they are very reserved with strangers and are quite independent-minded. They can be quite difficult to train at times and hence, require a firm handler; else they would just ignore the commands of their trainer. Although Ariege Pointers are quite tolerant towards other dogs, they have an inherent tendency to chase smaller animals, being a classic hunting breed. They are always full of energy and love any form of outdoor activities. They are also regarded as excellent jogging and hunting companions.
Grooming
As Ariege Pointers represent a working dog breed and are often used to hunt and retrieve, their ears must be cleaned and dried regularly. Their long droopy ears are very prone to infection and if not cleaned after a hunting trip, they can remain moist and act as the perfect environment for bacterial cultures and thus, infection to set in. However, their short coat is quite easy to maintain and requires brushing only once a week, to maintain its luster and sheen.
How to Cite