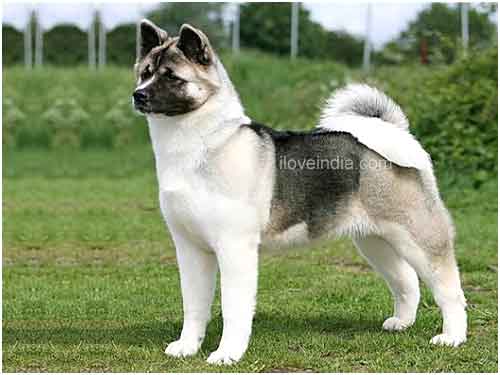 Weight: Male - 45 to 59 kg; Female - 32 to 45 kg
Height: Male - 66 to 71 cm; Female - 61 to 66 cm
Coat Type: Thick double coat
American Akita, popularly called Akita, belongs to the mountainous northern regions in Japan. Many countries consider American Akita and the Japanese Akita i.e. Akita Inu as two separate breeds. However, in US and Canada, both are considered to be the same breed, with only a few differences. Still, both the dog breeds differ in weight and in appearance. The American Akita has a black mask, except for the completely white dogs, whereas the original Japanese Akita does not have this black mask. We bring you some more interesting facts about American Akita dog breed, in the lines below.
History
As per the Japanese history, Amercian Akita has originated from the Matagi dog, which is one of the oldest native dogs in the country. American Akita grew mainly in the northernmost region of the Honshu Island, in the Akita region and thus got this name. In 1937,  Hellen Keller got the fist Akita into the United States and named it Kamikaze-go. The dog was gifted to her during her trip to the Akita Prefecture. The dog died in 1935 and in 1938, Hellen Keller got another Akita from the Japanese government. It was especially after World War II that several more Akita dogs came into America, brought by the American servicemen.
Appearance
American Akita has a typical appearance. Its body is shaped as per its adaptation to the cold climate. The breed has a large bear-like head, with triangular ears. Its eyes are also triangular in shape and are small and dark. It has a graceful tail, which falls in a sweeping fashion down the loin. It either falls in the form of a gentle curl or goes into a double curl. American Akita dogs have a double coat, with the undercoat being softer, thicker and shorter than the outer one.
Personality
American Akita is known for its intelligence and courage. It is extremely obedient and loyal to its master. It has a high sense of protection and defense towards the family. Though the dog is basically docile in character, it sometimes turns aggressive to other dogs and pets. It, therefore, needs a stern pack leader, who can restrict it from acting as per its own will. Since it lives under the commands of the pack leader, in the wild, it has to be given similar training at home as well. American Akita requires high training to make it believe that you are the leader of the pack and it has to act in certain norms.
Even after training, make sure to keep an eye over your American Akita, when it is with other pets. The breed makes an excellent watch dog. It is a dog of dignity and is feline in its action. American Akita dogs generally clean their face after eating and preen their kennel mate as well. They are also extremely choosy by nature and get bored easily. So, you will have to be extremely patient while training these dogs. American Akita does not bark excessively and can vocalize with many interesting sounds. It can bite if teased, hence children should be advised to avoid teasing it.
Genetic Disease
American Akita dog breed is susceptible to a number of diseases, like thyroid (both hypothyroid and autoimmune thyroiditis), dysplasia and immune diseases like Pemphigus and VKH. It is also prone to some skin problems, like SA, eyes patella as PRA, micro and entropion. Sometimes, it is also found to suffer from problems in the knee.
Grooming
Since an American Akita has coarse and stiff hairs on the body, it needs extensive grooming. Use a firm bristle brush to brush its coat. It should not be bathed regularly; only when it is absolutely necessary. Regular bathing will hamper the natural waterproofing ability of the coat. The dog sheds heavily two times in a year. American Akita needs proper care and grooming. It should be taken for daily walks and should be given regular, but moderate exercises. 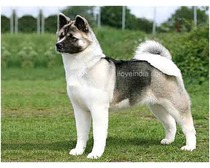 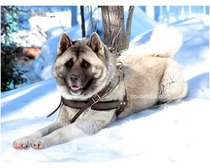