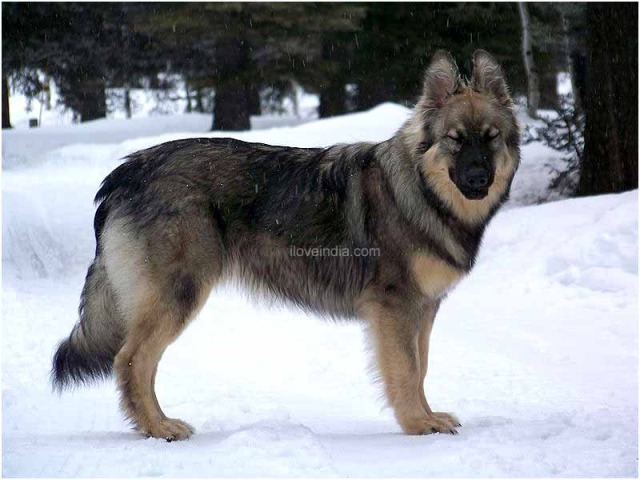 Weight: Males - 79 to 120 pounds; Females - 75 to 100 pounds
Height: Males - 25 to 28 inches; Females - 24 to 27 inches
Coat Type: Double coat; they have a thick and dense undercoat that shed out in the spring and summer; the outer coat is coarse and longer with light shade and black tips.
Alsatian Shepalute is a huge domestic dog, originating from the United States of America. It is very popular as a companion and friendly dog and makes a wonderful pet. It has a low working temperament and loves to spend time staying indoors and snuggling close to its owners. Alsatian Shepalute dogs are very close to their family members and are never known to be aggressive and violent. They are especially very fond of kids and small children. These dogs have a medium-length double coat, with strong physical features. They are well muscled and have an appearance that resembles a wolf somewhat. To know more about this unique and interesting dog breed, read the information given below.
History
The great Alsatian Shepalute was developed in the year 1987, by Lois Denny (now Lois Schwarz), in Oxnard, in the southern part of California. During those days, Lois came across a number of people who were unable to keep their pets due to the working behavior they exhibited. Thus, there was a great need for a large breed of dog without working behaviors, which could easily live with minimal exercise and within a limited boundary. In the year 1987, Lois developed a large breed of dog that had a friendly disposition and a companion nature, but with a wolfish appearance. In 1988, the first generation of this breed of dog was registered by the North American Shepalute club, with purebred Alaskan Malamute and German Shepherd Dog lines.
The club was later renamed as the National Alsatian Shepalute Club. Later on, to establish certain physical traits, like a broader head, a deeper chest and a large bone structure, the purebred English Mastiff entered the gene pool. For the purpose of breeding, the dogs were chosen selectively, after proper inspection of their health and personality. Furthermore, only those pups were selected to continue in the process of breeding that exhibited the desired companion dog traits. Dog with traits like hyper whining or barking were not bred. The American Shepalute was finally introduced to the American public in the year 2000, as it finally conformed to the desired breed standards in its appearance and personality.
Appearance
The general appearance and physical outline of the Alsatian Shepalute is very similar to the extinct Dire Wolf of the Middle to Late Pleistocene. Hence, they have a very broad and large head that slopes down slightly to the muzzle. Their muzzle, on the other hand, is wide and dark and houses two sets of strong white teeth. These dogs are known for having a pair of light brown or yellow eyes that are almond-shaped and set very close to ears. The ears are very erect and short in comparison to the rest of the body. The nose is dark black in color.
Alsatian Shepalute has a toned and well muscled neck that is short in length and thick in circumference. Its shoulders are slightly sloping and set wide apart, so as to accommodate the width and depth of its massive chest. These dogs have round and huge legs, with heavy feet and toes that are splayed slightly, to support their weight. Their tail lies flat and straight, without curving over the back of their body. The tip of the tail is black in color and reaches till the hock. They have a double layered coat, which ranges in color from gold and silver to grey, cream and black.
Personality
Alsatian Shepalutes are popular companion dogs that are known for their friendly and homely nature. They have a low working drive and do not indulge in games unless encouraged. These dogs are very close to their owners and love snuggling close to them. They are never violent and aggressive. However, Alsatian Shepalute dogs tend to be a little aloof, with unknown children and pets. Although they are sensitive to the smallest of sounds and are well responsive to light correction, they never get scared by loud noises or thunderstorms. What makes them perfect companion dogs is that they are extremely loyal to their family and are very fond of children and other pets. Also, with a little bit of training, they are known to make excellent watch dogs, as they are very responsive to the slightest of sounds.
Grooming
Alsatian Shepalute is a low maintenance breed, as it sheds dirt easily and the coat remains relatively free of odor. However, these dogs do require regular brushing around their ears and at the back of their legs. Also, once or twice a year, when their undercoat becomes loose and they start to shed, they need to be brushed and cleaned properly. 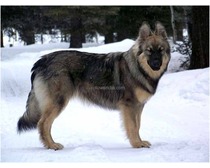 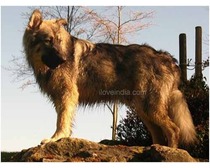