Finally, you’ve changed your mind and decided to get rid off that permanent tattoo that sits smart on your arm. Find out best methods of removing tattoos in this article.

The art of tattooing has been around for centuries and decades now. And with the younger generation opting for trendy tattoos across their different body parts, this art has become a fashion these days. But this is not the end to it as most people regret going under the knife to get that gorgeous piece of art on their bodies. After all, the excitement and thrill is at the hike only in the initial stages and later realize about the blunder that they have committed. Result? They want to get the tattoo removed as soon as possible as they were excited while getting it done. Various methods have come up that assure you 100% removal of the tattoo though their effectiveness largely depends on the experience of the artist who did your tattoo, the size of the tattoo, and where it is located. As such, the newer the tattoo, the more difficult it will be to remove it. Further, the more experienced the tattoo artist, the easier it will be to remove it. Steer through the different techniques for removing that undesired tattoo off your body. 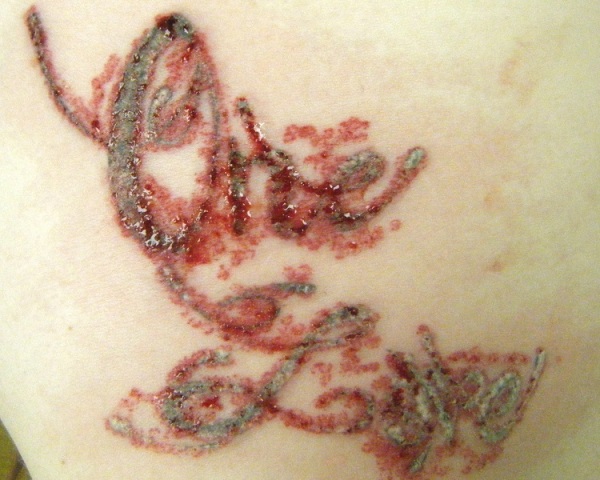 Image: [email protected]
Methods Of Removing Tattoos
Laser Removal
Undoubtedly, the best and popular method for removing a tattoo is the laser removal option. The laser method breaks up the tattoo ink into miniature fragments which are then dissolved by the skin’s own immune system gradually. Since tattoo ink sits in all layers of the skin, the laser method is the best alternative to break down the pigments and remove the tattoo. Depending upon the size and color of your tattoo, you may require anywhere between 2 to 10 sessions to complete remove the tattoo. Further, there are no risks of leaving any scars behind with this option. However, people have complained of allergic reactions since the tattoo ink is released into the body. Also, it turns out to be an expensive fare.
Dermabrasion
Dermabrasion is a slow process of removing the top layers of the dermis using a wire brush or a sanding disk. The region to be treated is number with a freezing solution followed by sanding the skin until all the layers containing the tattoo ink have disappeared. Since it is done by abrasive friction, the process can damage the skin leaving back unwanted scars
Surgical Excision
You can get your permanent tattoo removed surgically as well. For small tattoos, the skin containing the tattoo is cut and sutured together to cover the area treated. For large tattoos, the tattoo is surgically removed by cutting the tattooed area off the skin while the region left behind is covered by the skin grafted from another part of the body. Though the tattoo s permanently removed, it leaves back scars and is a painful method, in general. Thus, this technique is applied only when other contemporary options are not feasible.
Intense Pulsed Light Therapy
Similar to the laser removal method, intense pulsed light therapy, or IPL, is more commonly used in spas or medical spas. Instead of laser light, this method makes use of high intensity light to remove tattoos. The area is treated with a gel and then processed under a wand that emits pulses of light into the skin area so treated. This method is considered to be a more effective option that the laser treatment and is less expensive as well with less sessions. However, you have to scorch a hefty amount of money for this technique.
Scarification Chemical Peel
Though a less known method, scarification chemical peel uses an acid solution to peel the layers of the skin. As such, the most common acid used is trichloroacetic acid (TCA). Unlike other methods, this technique does not remove the tattoo overnight. After several sittings, the top few layers of the skin will disappear with the new skin being revealed from under. Further, it is not as painful as laser or dermabrasion. Apart from tattoos, this method is used for getting rid of other skin imperfections, such as warts, stretch marks, acne scars, fine lines, and age spots.
With numerous methods of getting rid of your tattoo listed above, study thoroughly and decide on the best removal treatment.
How to Cite