Embroidery is the art of forming beautiful intricate designs and motifs on fabrics with different colored threads. One of the most famous forms of embroidery is the Punjabi embroidery. The traditional embroidery of Punjab is known as Phulkari. The name itself means growing of flowers. Thus, the motifs and patterns of Phulkari essentially contain floral designs and motifs. Bright color combinations are used for the floral patterns and they can be seen in almost all traditional attire. 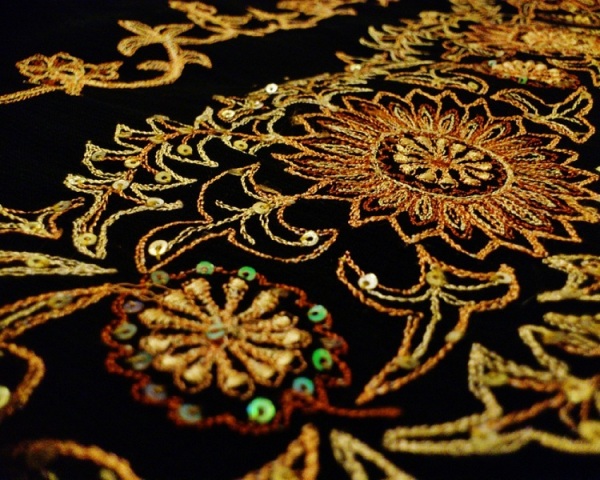 Image: [email protected]
Historical Background
The exact origin of Phulkari cannot be traced back to the point of precision. One may find references to Phulkari as early as 2000 years back in the Vedas. In the popular Punjabi folklore Heer-Ranjha, the art of Phulkari has been mentioned by the poet Waris Shah. The Phulkari gained its present form way back in the 15th century in the reign of Maharaja Ranjit Singh. It was evolved in many different forms and there was one different design for every occasion. The knowledge of this art was passed on from one generation to the other and it was not for sale at that time. Phulkari was considered auspicious and was generously used in wedding trousseau.
The Process
Traditionally, the Punjabi embroidery is done on handspun khadi cloth. Simple darning stitches are formed using un-spun silk floss yarn known as 'pat'. For this, single strand threads are made into use. Due to the perfection, intricacy and delicacy in designs, Punjabi embroidery has emerged as one of the most sought after crafts. The stitches may be vertical horizontal or diagonal, depending on the variation and shading that is needed. The process of doing the embroidery is quite exhaustive and only professional and experienced hands can come up with stunning designs. You can find Phulkari on salwar-kameez, shawls, heavy dupattas, stoles, sarees, etc.
Phulkari for Different Occasions
Chope
This is a red colored cloth that has Phulkari on the borders and edges and is presented to a bride by her grandmother, just before the wedding.
Vari-da-bagh
This is essentially a red colored cloth that has embroidery in small patterns all over in yellow, denoting fertility and happiness. Along the border, the patterns are smaller and beautifully designed in different colored threads.
Ghunghat Bagh
Ghunghat Bagh, also known as sari-pallau, is essentially used to cover the head as a symbol of respect for elders. There is embroidery on the small border in four sides. A large triangular motif is embroidered at the center of each side, making it look beautiful.
Darshan Dwar
The Darshan Dwar is basically a gate at a religious place of worship that offers a clear view to the deity. The embroidery used on the fabric is for the purpose of presentation at temples or adorn the walls at home when the holy book of Sikhs, the Guru Granth Sahib, is brought inside a house. It follows the theme of a decorative gate.
Suber
The Suber is a Phulkari that is worn by the bride during the rites of the marriage ceremony. There are five motifs, one at center and four at the corners. It is decorated heavily and comprises of delicate designs.
Chamba
Chamba is a fusion work of Phulkari and is characterized by an intricate design of wavy creepers, stylized leaves and flowers. Also, it may contain designs inspired from daily life and fauna like chilies, peacocks, diamonds, sunflowers, etc.
How to Cite

Designs To Paint On Jeans