Nose piercing may seem like a fad, but this practice has been around for centuries now. Read about nose piercing, points and the procedure to get nostril pierced.

Though nose piercing may seem to be among the latest fad among fashion sleuths all over the globe, the truth is that this art has been around for centuries now. The nose-piercing practice is normally interlinked with India, where its famous Ayurvedic branch of medicine suggests that the particular point on the nostril to be pierced will make child birth easier. Apart from this, piercing of the nose is also considered to enhance the beauty / personality of the person. This art is also popular in Pakistan, Bangladesh, Middle East, Arab Countries, U.S., UK, Canada, the Caribbean, Australia, Italy and numerous other places. 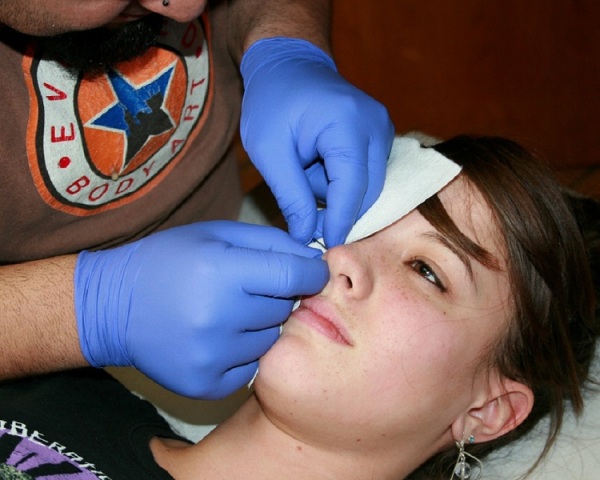 Image: [email protected]
Nose Piercing Points
Though you will normally spot women having their nose pierced, this practice is quite popular among the men folks too. In places like India where nostril piercing is an integral part of culture, a lot of parents get their daughter’s nose and ears pierced during childhood. Nose piercing can be performed on either left or right nose, but then the preferred points for this may differ from one place to another. Few people sport multiple nose piercings, in either or both nostrils. Common option of jewelery for nostril piercings are nose screws, nose bones and ball closure rings. One can even consider a horseshoe between your nostrils or a plain stud on the nose.
Things You Require During Nose Piercing -
How to Pierce your Nose? Here’s a Step-by-Step Procedure!
Step One - Seek help of a professional licensed piercer only for getting your nose pierced. Nose piercing may look ‘cool’, but it’s not a game so it’s better if you do not rely on friends and amateurs street vendors for the same.
Step Two - Make sure that the equipments to be used by the piercer are sterilized and that he / she wears new late gloves during piercing. Also confirm that the nose jewelery offered by the piercer is of top quality .
Step Three - Discuss with the piercer about what exactly you're interested in, but trust him / her to make the verdict on placement.
Step Four – Shut your eyes and concentrate on taking long, calm breaths once the nose piercing procedure starts. The piercer's skilled hand should direct the needle through with ease and with just slight pain.
Step Five - Adhere to post-piercing care guidelines your piercer gives you. Be ready for a small amount of puss or discharge and so fix time for two daily cleanings.
How to Cite

How To Make Your Nose Look Smaller

How To Pierce Your Ears

How To Get Rid Of Nose Blackheads