Thanks to the punk rock movement that shook the world with its bold blazing style, way back in the early eighties, Mohawk has emerged as one of the most stylish haircuts for all men alike. However, there is more to Mohawk hairstyle than just its punk status. Touted as the symbol of rebellious free thinkers and hyped as the ultimate style statement of the punks, rockers and Goths, it was initially hyped as an outrageous fashion statement, styled for the mavericks and the outlaws. However, this hairstyle has a more ancient origin than usually thought of, with its roots extending to the Native American Mohawk Indian Tribe. Mohawk hairstyles have now been accepted by the mainstream fashionistas, who are less uninhibited and more game for anything that is big, bold and beautiful, which possibly explains the craze for the more eyebrow raising hawk styles like fanned hawk, Liberty Spike hawk, faux hawk, reversed hawk and more. The different Mohawk hairstyles today have stormed the fashion world and is being flaunted by more and more men. To explore a few more the Mohawk hairstyles for men, read on. 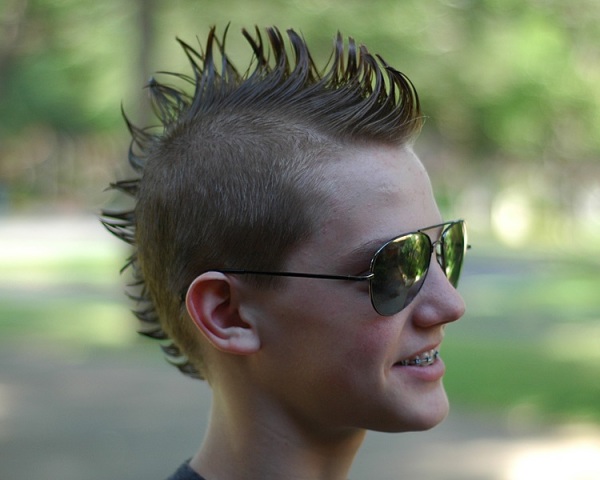 Image: [email protected]
Different Mohawk Hairstyles For Men
Short Mohawk Hairstyles
Mohawk hairstyle has almost achieved a cult status among the punk rockers and celebs alike and needless to say, looks outrageously stylish. For guys who wish to flaunt a Mohawk with panache without wanting to look exceedingly dramatic, the short and spiky Mohawk is the best bet. Some of the much loved short Mohawks are the short cropped razor style, the traditionally spiked Mohawk with a twist and not to forget, the braided Mohawk. Just trim the sides barring a strip of hair, almost 3-4 inches long in the center and then spike, twist and braid it as you like.
Black Mohawk Hairstyles
The Afro-American have forever been uninhibited in their style and have iconed some of the most eyebrow raising hairstyles through history. Dreadhawk and frohawk are the two chic Mohawk hairstyles for black men. These styles are tailored for thick and wavy crops, and are very conspicuous and bold. One of the most exciting features of this hairstyle is that, unlike the traditional Mohawk, these hairstyles demand two or three strips of hair on the crown. Other interesting options for Afro-American guys are spiky punk Mohawk, subtly spiked twisted Mohawks, faux Mohawks and more.
Faux Hawk Hairstyles
This Mohawk hairstyle has almost gained an iconic status, thanks to the likes of David Beckham, Colin Ferrel and Christiano Ronaldo, who have flamboyantly flaunted this style with panache. Slightly rebelliously but extremely stylish, faux Mohawk is easy to style and doesn’t need extensive cropping. Just style the longer strip of hair at the center into a fan and style it with mousse or styling gel. For a funkier look, you can texturize the strip or experiment with stand-up spikes, tousled look or just messy pointed spikes.
Fanned Hawk Hairstyles
If are the kind of person who hate to downplay fashion, fanned Mohawk is indeed your cut. One of the most eye-popping Mohawk styles that makes for an inimitable style statement, fanned hawks are a little difficult to style, but is indeed worth all the effort. For this, you first need to shave both sides of your head, saving a two inch strip on the center. That unshaven strip should be allowed to grow out as long as possible. Once it has achieved the desirable length, you can style them into straight vertical spikes, to resemble a Roman centurion’s helmet. This style is a total head-turner!
How to Cite