Have you ever wondered what war time fashion would have been like? Read on to find out some famous hairstyles of the 1940s and don the forties look.

It is true that 1940s witnessed the disastrous World War II, but if you think that this was all that decade was about, you are in for a surprise. Forties did not put a halt to the fashion trend of the decade, despite the ongoing war. However, since the war had virtually affected every aspect of life including fashion, the amount of fabrics used in each garment was limited. No wonder, bikini was the major discovery of this era! Style was combined with practicality to achieve a lasting elegance. This era saw fashion unfold in its own unique way. Wartime fashion posed its own set of challenges, but people rose to it with stellar results. Women, sought ways to contrast their dull and drab wardrobe with an elaborate hairstyle. Curls were the catchword. The tresses were styled in a creative and elaborate fashion. Short haircuts of the 1930s gave way to the popularity of shoulder length or longer hair. Another feature of the hairstyles of this era was that hair began to be styled with more height. Here we have a collection of some of the most sought-after hairstyles from the 1940s era. 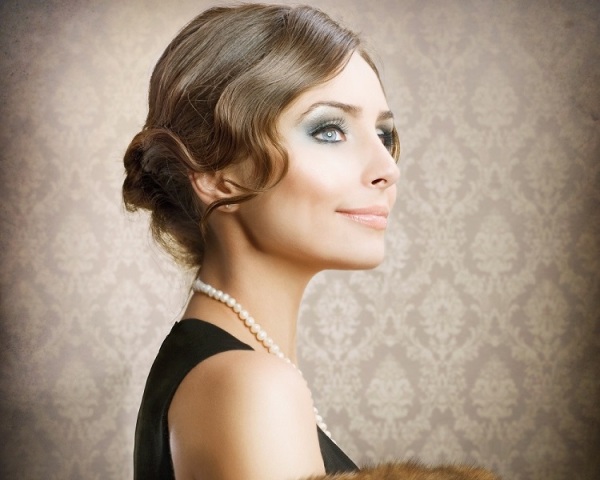 Hairstyles Of 1940s
Chignon
A popular bun-type hairstyle, chignon gets its name from the French phrase ‘chignon de cou’, which means nape of the neck. Though the history of this hairdo can be traced back to ancient Greece, the 1940s decade witnessed its return to the fashion block. Even today, it is popular because of the ease with which it can be styled and its elegant French vibes. To create a 1940s chignon hairstyle, gently pull your hair back to form a bun. While few chignons are twisted into French braids, others are adorned with embellishments.
Victory Rolls
You guessed it right. Victory rolls were for those women who were busy celebrating the success of the recently concluded World War II. These were elegant rolls which were styled by first twirling sections of the hair around finger tips and then setting them with pins. To give the look enough body and bounce, the hair was kept pinned overnight. In the morning, the hair was gently brushed up to the sides, keeping the rolls intact.
Ringlet Curls
Shirley Temple’s cute and adorable ringlet curl hairdo in films like Heidi and Curly Top was a rage in the 40s, with every mother wanting to see her little princess with those curls springing on her head. To style this hairdo, you need to first dampen your hair and divide it into several segments. Apply gel or mousse to each segment. Now take a strip of fabric slightly longer than your hair length and tie it around the base of the first segment. Wrap your hair around the knot. When the entire hair has been done up this way, tie two ends of the curl together again. The smaller the segments, the tighter the curls would be. Sleep with it overnight and set them in the morning with hair spray.
Pageboy
Named after an English page boy or servant, this is a smooth jaw-length hairstyle that is quite often combined with a horizontal fringe or bang. For women with mid-length or long hair, the page boy hairstyle gained popularity in this particular decade. Adorning it with a flower or two, ladies styled this hairdo especially during their evening swing dances. This hairstyle can be mastered in no time since all that it involves is proper parting and curling of hair.
Omelet Fold
This was yet another interesting hairstyle adorned by women of the 1940s era. This hairstyle is created by parting the hair slightly off centre from the bottom to top. Now, you need to roll or fold each side, until it meets the parting. Set it with the help of pins. To add to the decoration and style, the top of the hair should have curls.
How to Cite